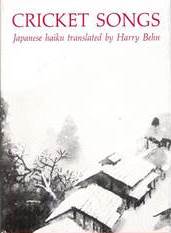 Harry Behn, along with Peter Beilenson, published a series of Haiku Harvest books for Peter Pauper Press which served as an introduction to haiku for many people back in the 60s and 70s.
The book at hand, Cricket Songs, however, was solely translated by Behn and published by the larger firm of Harcourt, Brace, and World. The volume exhibits an admirable lyrical quality, at least admirable for this reader, and, when it errs, errs on the side of image. It is delightfully, profusely illustrated with art "Sesshu and other Japanese masters."  Here are two pages, with a couple of poems: 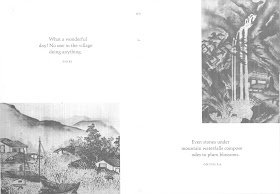 
The poems, in the style of the times, are predominately translated into a 5-7-5 format, and Behn shows how this can be done to advantage:


A cloud shimmering
on the still pool ... deep below
shadows, a fish stirs.

Though the line break between 2 and 3 might today be 'unfashionable,' it serves its own prosodic purpose.  The enjambment feels less imposed by form then intended by Behn. In either case, it works for me:


Butterfly, these words
from my brush are not flowers,
only their shadows.

At once a stunning image with an almost postmodern feel, Soseki's poem has a gorgeous resonance that may be seen in some of the finest haiku.


My horse clip-clopping
over a field ... oh ho! I'm
part of the picture!

Speaking of postmodernisn, there you have it - or do you? Here is another by Bashō:


The seed of all song
is the farmer's busy hum
as he plants his rice.

The interconnectedness of all things is perfectly connected in this poem - a modern translation would probably drop the 'is' and 'his', not worrying about syllable count. But the meaning is clear and resonant either way. There is some complexity in this little poem - think about time as you read it, the moment and future time.


Lightly a new moon
brushes a silver haiku
on the tips of waves.

This is a perfect meshing of the 5-7-5 form, imagery, and content. Is it classic haiku, or even haiku at all? Who knows? It is, however, wonder full.


One man and one fly
buzzing along together
in a sunny room . . .

The translation of this classic Issa haiku has some problematic elements, which perhaps work in its favor. The enjambment of lines one and two, where the fly in line one is buzzing in line 2 causes the reader think of the man, too, as buzzing, and that causes some mischievous delight for me. Not intended, perhaps, but there you have it.


Since my house burned down,
I now own a better view
of the rising moon

Broken and broken
again on the sea, the moon
so easily mends

I love this little poem - there is something beyond pure image here that tolls a major chord.

A delightful collection, all in all, though the selection above is but a dip in a very deep well.


Harry Behn himself lived an eclectic life. Wikipedia gives a fair idea: he was a poet, a translator, a photographer, a screenwriter (collaborating with King Vidor and Howard Hughes) and, by virtue of a chance encounter that led him to live with the tribe, a member of the Blackfoot Indian community. His papers are collected at the University of Minnesota. His works, including his haiku translations, were thought of as being primarily for children.

Yet, in a portrait of Behn by Peter Roop for Language Arts magazine back in 1985 (which is the very first link in this post, above), one word struck home that he read which Behn used to describe his own work: primitive.  Behn described his "business" of composing poetry and stories for children as primitive.

Roop goes to the heart of the matter in his portrait when he asks why this word:


The word primitive as Behn employed it does not mean a backward or unsophisticated approach to something. He used primitive to represent that special sense possessed by those who maintain a certain direct bond to the natural world.

Roop goes on to illustrate this through Behn's own poetry and prose, never alluding to haiku. But one can see in this definition the essence of what the translator was after in his work with haiku: that direct bond to the natural world. Roop notes that, in addition to his becoming a member of the Blackfoot tribe, Behn also had 'extensive contact' Yavapais people of his home state of Arizona.

As a relatively early pioneer in the translation work of Japanese haiku into English, Harry Behn appears to have been uniquely qualified as the work above illustrates. The book itself, Cricket Songs, may be had for as little as two bits on amazon (of course there is the pesky $3.99 shipping charge), but you can find a nice hardcover copy at abebooks for under 5 bucks, so why not deal directly with an independent used bookseller?

The book is well worth double that and more. 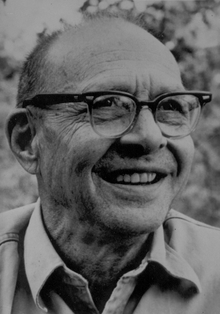 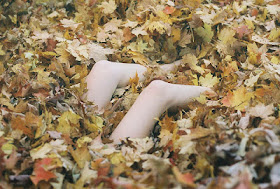 Photo by galaxies and hurricanes

when will it become
a cricket's nest?
my white hair