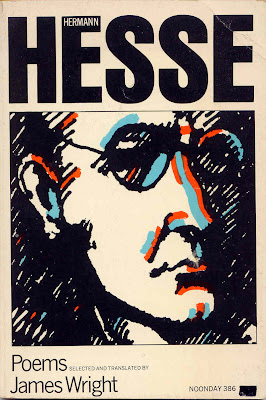 Today is the anniversary of the birth of one of my favorite writers, Hermann Hesse. Over the years I've read lots about his irrelevance, about his rise in popularity during a time of wild-eyed, romantic enthusiasm, which has since dimmed in what I believe he would characterize as the shadow of lost dreams. He always considered himself a poet first and foremost and we have only 3 slim volumes of verse in English. In recent years, I have reread the major works and am happy to report that, unlike the wild-eyed romantic enthusiasm of an entire generation, they have not dimmed. He lived through tumultuous times and here is a short poem of his, translated by the incomparable James Wright, that captures the dark times through which we are currently passing as well as it does his own:

Now we are silent
And sing no songs anymore,
Our pace grows heavy;
This is the night, that was bound to come.

Give me your hand,
Perhaps we still have a long way to go.
It's snowing, it's snowing.
Winter is a hard thing in a strange country.

Where is the time
When a light, a hearth burned for us?
Give me your hand!
Perhaps we still have a long way to go.

For more on Hesse, with a short, brilliant poetry excerpt, check out today's Writer's Almanac. Pictured at the beginning of this post is one of the excellent covers for Hesse's works by Milton Glaser.

I like that poem. I'll have to check out more by him. Thanks!

I have read a fair amount of Hesse but not his poetry. I'm going to look for these.

It's wonderful to hear Hesse through Wright's voice. Thank you.

Glad you liked the Hesse. The four volumes that were published at one time were:

Yesterday I made a mistake, sort of, when I said 3 volumes. Wandering, which is also translated by Wright, is a mixture of prose, prose poems, and poetry. It also contains black and white reproductions of his beautiful watercolor paintings.

Crisis may be the most interesting for fans of Hesse's fiction. It was written during the composition of Steppenwolf and reflects some of the same themes, as its title implies. The poems are not typical of Hesse; nonetheless, they are good to read.

Hours in the Garden may be the hardest to describe. The poems are all longer, some tending to be narrative in style. I enjoyed some of them very much.

Poems, from which "Evil Time" came, tends to generally revolve around the theme of home or more precisely the desire to return home in the archetypal sense. The feeling of alienation showcased here is one particularly of interest to Wright, who himself always felt displaced and "homeless," (ironically, a common Issa theme) hence his selection.