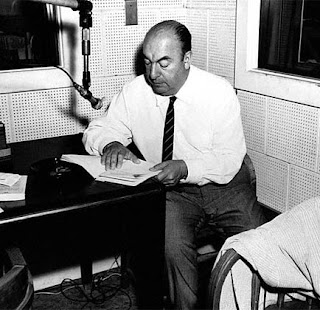 Today is the anniversary of the birth of one of the 20th century's greatest poets, Pablo Neruda. Here is a statement of purpose:

I loved the entangling of genitals,
and out of blood and love I carved my poems.
In hard earth I brought a rose to flower,
fought over by fire and dew.

That's how I could keep on singing.

From Isla Negra: A Notebook

de;sire is to "use" this Neruda piece as an introduction to Stone Girl E-pic...

my Neruda "stash" resides in my library at EYE LEVEL
be-tween my Paz "stash" and my Lorca "stash!

try on for SIZE: Pablo Neruda's

- Twenty Love Poems and a Song of Despair

-The Heights of Macchu Picchu

few IMMORTALS come our way and they are in all ways the ones tied inseparably to their Muse (s) Pablo Neruda is one of those.

Thanks, Ed ... I'm a big fan of Neruda (have most of the books you mentioned) and did a search of the blog and can hardly believe this is the first time I've mentioned him.

Over at Facebook, Oliver Schopfer shared this Neruda poem in response to this post an its a beauty. Fits in nicely with "Ars Magnetica" nicely I think:

And it was at that age ... Poetry arrived
in search of me. I don't know, I don't know where
it came from, from winter or a river.
I don't know how or when,
no they were not voices, they were not
words, nor silence,
but from a street I was summoned,
from the branches of night,
abruptly from the others,
among violent fires
or returning alone,
there I was without a face
and it touched me.

I did not know what to say, my mouth
had no way
with names,
my eyes were blind,
and something started in my soul,
fever or forgotten wings,
and I made my own way,
deciphering
that fire,
and I wrote the first faint line,
faint, without substance, pure
nonsense,
pure wisdom
of someone who knows nothing,
and suddenly I saw
the heavens
unfastened
and open,
planets,
palpitating plantations,
shadow perforated,
riddled
with arrows, fire and flowers,
the winding night, the universe.

And I, infinitesimal being,
drunk with the great starry
void,
likeness, image of
mystery,
felt myself a pure part
of the abyss,
I wheeled with the stars,
my heart broke loose on the wind.

I've never read Neruda, but I will now.

From loving and journeying. I like that very much

"(...)and I wrote the first faint line,
faint, without substance, pure
nonsense,
pure wisdom
of someone who knows nothing,
and suddenly I saw (...)"

I once did a reading with a poet from Omaha named Matt Mason. After the show, we exchanged chapbooks and one of the ones he gave me was Mistranslating Neruda from New Michigan Press. The book is Mason's translation of Twenty Love Poems And A Song Of Despair despite his admitted "amazing under-abundance of knowledge about the Spanish language." Ignoring accuracy, but trying to capture something of the spirit.

A few examples can be found on the DIAGRAM site:
http://thediagram.com/2_1/mason.html

Years back, sometime early 1980's I guess, I decided to try to translate Neruda's Canto General in its entirety. At the time, though many of the poems from it had been translated by various translators, the complete work had never been translated into English. (It has by now, quite effectively by Jack Schmitt.)

I got through about the first fifth of the book, with only rudimentary Spanish (though my Spanish of necessity improved gradually as I went along). A formidable project to learn numerous things about writing and poetry and writing poetry. This to put it mildly.

I make no huge claims for the translations I did, which I did mainly as a way of getting closer to the poems. One of the poem translations I did was published once. Apart from that they sit in the notebook I worked in, and -- to whatever measure -- in my memory and the fabric of my life.

"Bring to the cup of this new life
your old buried sorrows."

(A couple of lines from "Alturas de Macchu Picchu" in Canto General. The lines here are my own translation.)

Word verification is "rocal." Not sure offhand if it's a Spanish word, but surely a Nerudan word?

Hey, shawnte, thanks for the note and link - very interesting approach.

Lyle, why not dust off that notebook and see what's in there. Might spur some more work ... appreciate you sharing your thoughts (and lines).