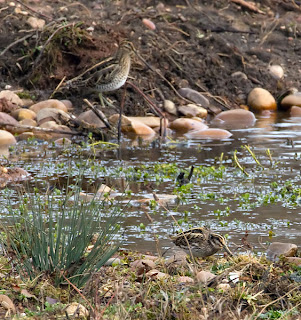 
Sunday Service regular, Nick Cave, steps in for another installment with the song "Supernaturally" from his album with the Bad Seeds, entitled Abattoir Blues. There are at least two literary precursors to this one, which I've mentioned on a previous post a few years back. First, a spirited live performance, then the lyrics, followed by something of an explanation

Through the windswept coastal trees
Where the dead come rising from the sea
With a teddy-bear clamped between her knees
She says, where can my loverman be?
Well, I'm down here, babe, with the Eskimos
With the polar bears and the Arctic snow
With a party of penguins who do not know flow
How I can get back to thee
Well I'm gonna ask you, babe
Hey! Ho!
Oh baby don't you go
Hey! Ho!
Oh no no no
Hey! Ho!
Oh baby, don't you go
All supernatural on me
Supernaturally

Once I was your hearts desire
Now I am the ape hunkered by the fire
With my knuckles dragging through the mire
You float by so majestically
You're my north, my south, my east, my west
You are the girl that I love best
With an army of tanks bursting from your chest
I wave my little white flag at thee
Can you see it, babe?
Hey! Ho!
Oh baby don't you go
Hey! Ho!
Oh no no no
Hey! Ho!
Oh baby, don't you go
All supernatural on me
Supernaturally

Now I've turned the mirrors to wall
I've emptied out the peopled halls
I've nailed shut the windows and locked the doors
There is no escape, you see
I chase you up and down the stairs
Under tables and over chairs
I reach out and I touch your hair
And it cuts me like a knife
For there is always something
other little thing you gotta do
Hey! Ho!
Oh baby don't you go
Hey! Ho!
Oh baby, no no no
Hey! Ho!
Oh don't you go
All supernatural on me
Supernaturally


What might this have to do with literature? Well, first there is a poem by Auden, popularly known as "Funeral Blues":

Stop all the clocks, cut off the telephone.
Prevent the dog from barking with a juicy bone,
Silence the pianos and with muffled drum
Bring out the coffin, let the mourners come.

Let aeroplanes circle moaning overhead
Scribbling in the sky the message He is Dead,
Put crêpe bows round the white necks of the public doves,
Let the traffic policemen wear black cotton gloves.

He was my North, my South, my East and West,
My working week and my Sunday rest
My noon, my midnight, my talk, my song;
I thought that love would last forever, I was wrong.

The stars are not wanted now; put out every one,
Pack up the moon and dismantle the sun.
Pour away the ocean and sweep up the wood;
For nothing now can ever come to any good.


Previous to the Auden, however, there was a traditional Irish poem/song, adapted by Lady Gregory, known as "Donal Óg":

You promised me, and you said a lie to me,
that you would be before me where the sheep are flocked;
I gave a whistle and three hundred cries to you,
and I found nothing there but a bleating lamb.

You promised me a thing that was hard for you,
a ship of gold under a silver mast;
twelve towns with a market in all of them,
and a fine white court by the side of the sea.

When I go by myself to the Well of Loneliness,
I sit down and I go through my trouble;
when I see the world and do not see my boy,
he that has an amber shade in his hair.

It was on that Sunday I gave my love to you;
the Sunday that is last before Easter Sunday.
And myself on my knees reading the Passion;
and my two eyes giving love to you for ever.

My mother said to me not to be talking with you today,
or tomorrow, or on the Sunday;
it was a bad time she took for telling me that;
it was shutting the door after the house was robbed.

My heart is as black as the blackness of the sloe,
or as the black coal that is on the smith's forge;
or as the sole of a shoe left in white halls;
it was you that put that darkness over my life.


In the later are the lines "You have taken the east from me; you have taken the west from me"; in the former, it transforms into "He was my North, my South, my East and West" and, lastly, from our humble little litrock number there is "You're my north, my south, my east, my west." Though it might be thought that the connection between "Donal Óg" and "Funeral Blues is tenuous, the link with "Supernaturally", at least in the case of Auden is obvious, hence today's selection.

Though I can't seem to find the recitation of "Donal Óg" (a jumpy version may be found here) from John Huston's wonderful film The Dead, here is a very fine moment, indeed, from an otherwise average film, Four Weddings and a Funeral, that brought Auden's work back into the popular arena, at least for a few months:

Lastly, for the first person to answer the following question (and how many even made it this far into the post?) in the comment section, a free six-issue subscription (or choice of two chapbooks or a six-issue extension to a current subscriber) to Lilliput Review:

How is the picture at the top of this post connected to what follows?

a finger pointing
to the west...
autumn wind

We do not fly or stand within the moment at the same time. Our loves leave, and leave us stunned knowing the depth of our love in grief and loss. Grief is how we know we have loved. Would that it were another way.

A great post from soup to nuts. But, I can't make the connection between the the picture and the poem ...

the finger pointing out that
the birds and the stream flowing
are life and that autumn wind
is the inevitable (coming) death ?

Anonymous, eloquently, if painfully, put. Thanks.

John, thanks so much ... nobody has gotten it yet, so it was probably too hard. More on that soon.

the inevitable coming death, indeed ... it is always the finger pointing outward that is pointing back to ourselves ... thanks, Ed.

you have to look to the west and what is setting
or changing there.
wld have to look into symbolism of "west"
and also determine which finger is doing the pointing

the two birds and the stream aren't at all interested

finger is pointing towards the Buddha's Pure Land
which is in the west
and, since life is only temporary and all things
including you are changing ("autumn wind" = equals change))
better get going
you (two) birds
as the stream is

Ok, I'll give the riddle a go. I notice the cattail-like growth in the foreground of the picture, bending toward the picture's left. Assuming the left is west, then the "finger" is pointing to where the sun will set. The autumn wind bending the finger and therefore pointing us to look at the sunset signals not only the nearing winter (death) but the going out of the light, also a death. Thanks for the challenge. Peace, Constance

Ah, that finger, what moon,
what finger?

Thanks so much for giving this one a going over. Not what I was thinking of then, but I am now.

One six issue subscription for you.
Drop me an email at:

lilliput review AT gmail DOT com
[no spaces, reading AT for @ and DOT for .]

and I will get your new 6 issue subscription going.