Poe: The Conqueror Worm - On Movies Adapted From Poems

In this day before the beginning of a new era for the US, a solemn tip of the hat in memory of Dr. King, some of whose vision is finally coming to fruition.


Today is also the anniversary of the birth of Edgar Allan Poe, the poet and short story master of the macabre, so I thought I'd take the opportunity to talk about a movie category that is very small, indeed: the adaptation of a poem into a movie.

On the face of things, Poe has the distinction of having had three poems adapted into motion pictures. But, as with many things relating to the world of cinema, it's not quite that simple, so let me start from the beginning

Back in the halcyon days of 50's and 60's horror films, a sure ticket to box office success for Roger Corman and other B-movie purveyors was adapting a work of Edgar Allan Poe for the big screen. After taking on the obvious (Pit and the Pendulum, The Fall of the House of Usher, The Tell-Tale Heart, The Raven, Premature Burial, Murders in Rue Morgue, The Mask of the Red Death), Hollywood and all seemed to have lost their collective way. Though there was still plenty of excellent source material to adapt, folks started to get extremely liberal with what they called "based on the work of Edgar Allan Poe." One prime example was the film The Haunted Palace, the title of a Poe poem but which in fact was an adaptation of the H. P. Lovecraft story The Case of Charles Dexter Ward. Another "loose adaptation" was the film The Conqueror Worm, the content of which also had absolutely nothing to do with Poe.

The movie was made by the young auteur, Michael Reeves, filmed in Britain and originally titled Edgar Allan Poe's Witchfinder General, starring the horror genre's premier actor, Vincent Price. When brought to the US, the powers that be didn't like the title (despite the Poe reference) and so made a decision that only a Hollywood studio could come up: they decided to retitle the film Edgar Allan Poe's The Conqueror Worm and had Price read the Poe poem over the re-dubbed credits. Since the poem is something of a generic homage to the Grim Reaper, the strategy pretty much would have worked with any horror film.

That strategy that turned out to be disastrous on a number of fronts. For one, here's the plot summary from The Internet Movie Database:

England is torn in civil strife as the Royalists battle the Parliamentary Party for control. This conflict distracts people from rational thought and allows unscrupulous men to gain local power by exploiting village superstitions. One of these men is Matthew Hopkins, who tours the land offering his services as a persecutor of witches. Aided by his sadistic accomplice John Stearne, he travels from city to city and wrenches confessions from "witches" in order to line his pockets and gain sexual favors. When Hopkins persecutes a priest, he incurs the wrath of Richard Marshall, who is engaged to the priest's niece. Risking treason by leaving his military duties, Marshall relentlessly pursues the evil Hopkins and his minion Stearne. Summary written by Ed Sutton.

The film turned out to be one of the most brutal and sadistic main stream films of its time. In fact, Matthew Hopkins was a real historic character. For a variety of reasons, not the least of which is the shoddy treatment the film received over the years (it was subjected to, among other things, having its original soundtrack removed and replaced by another that would give the term banal a bad name), the movie became such a cult classic that when it was recently restored to its original condition, it actually was screened at the Museum of Modern Arts film restoration festival. Last year I reviewed the box set "Vincent Price: MGM Scream Legends Collections" for the site Fulvue Drive-In and here was my take on Witchfinder General from that set (with a number of minor edits for context and perfuse effusions) :


The last feature film in the set is Witchfinder General and it vies for the distinction of best of the box. This film's legendary status can almost work against it; those who've waited years to see it sometimes ask what's the fuss? It is at once a product of its time and timeless. Its storied legend includes being billed in as Edgar Allan Poe's Witchfinder General, when in reality it was loosely based on an historical novel of the same name by Ronald Bassett. In , it was released as The Conqueror Worm, in a slightly demented attempt to yet again squeeze Edgar Poe dry, with Price reading the Poe poem over the opening credits. The film itself is captioned Matthew Hopkins: Witchfinder General and this is probably the proper title. The third film by auteur director Michael Reeves, whatever you call it, is was one of the most violent films of its day. Reeves was upset with the casting of Price as Matthew Hopkins and he let him know it; there was no love lost between the two. Despite this, or perhaps, because of it, Price gives one of the best performances of his career. Gone are the camp and clichés attached to the Price franchise; no arching eyebrows, no wicked smile, no knowing wink to the audience, and what remains is the actor and he comports himself well, indeed.

In later years, Price admitted his distaste for Reeves and, tellingly, also acknowledged that he felt it was one of his best roles. The extreme violence of the film, tame in comparison to, say, today's torture/porn franchise Saw, covers the full gamut, literally and metaphorically: sadism, torture, rape, depravity and sexual exploitation. Set in in a time of political upheaval, journeys from town to hamlet in search of witches and the fee local corrupt officials will pay him to flush them out. The turmoil throughout 16th century lets someone like run amok in the name of social order and one doesn't have to think long to see a very real connection to today's political climate. In fact, this movie is more relevant than when I first viewed it over 10 years ago and the irony is tragic, indeed. The horror here is all too real and one would be justified to categorize this as more a violent historical film than true horror. The film shifts dramatically about halfway through to a vengeance film, with leading man Ian Ogilvy going all out to avenge his slain fiancée, so much so that he becomes that which he pursues. Perhaps most chilling of all are the scenes of the crowds passively witnessing the hangings and burnings, at one point even cooking potatoes in the same fire that has just consumed a supposed witch. Technically, the film has been cleaned up considerably since my own previous viewings and this adds dramatically to its power. The original, eerie score has been restored in all its glory.

In a tale so bizarre as to be seemingly fictional, a truly horrific moog score was substituted for the original in the 80's when Orion, who had bought AIP, sold the rights to the music to a beer company for a commercial.

Here is the original American trailer for the film and it captures enough of the horrific flavor that viewers are warned not once but twice to leave the kiddies home and this was one time that the Hollywood hyperbole was, in fact, not hyperbolic at all.

And here are two more scenes from Turner Clasic Movies: here and here.


The idea of making a full length feature film from a poem is singular, indeed, and the fact that all three made from Poe poems have at best a tangential relationship to the original source is not surprising. To its credit, The Videohound (2007) does not list any of the three in its "Kibbles" index under the category "Adapted from a Poem." They do list 18 films, however, and here they are

I'm not sure if there are more major motion pictures that would fall into this category or if, indeed, the ones the Videohound has listed are true adaptations. Can anyone think of any others? Wikipedia has a nice list, though it does include short films and, like many things Wikipedia-ish, shows some questionable judgment. 13th Warrior is a bit of stretch since its an adaptation of a Michael Crichton novel, though it is something of a retelling of the Beowulf story. They also include The Raven. In addition to these, there is a fine article from the The Boston Globe on movies based on poems, which includes Jabberwocky, one missed by both VH and Wikipedia. I would add to all these two adaptations of "Dante's Inferno:" a new animated version and an older obscure Spencer Tracey film from the 30's, set in at an amusement pier, that has a dream-like sequence that replicates the tortures of the damned that makes up for its brevity with its Gustave Dore style depiction. This footage evidently was taken from an earlier silent version and it is captured perfectly in this description.

Finally, to come full circle on his day, here are the Edgar Allan Poe poems that prompted the post: The Conqueror Worm and The Haunted Palace. 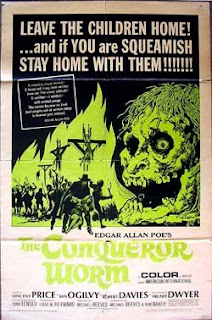 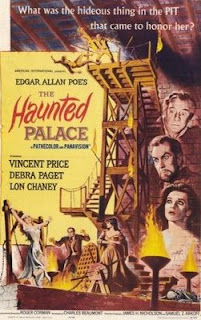 Poe (and his wife) buried in small courtyard of a church near the Fulton Fish Market in East Baltimore ... just to the right as you come through the gate...

then there is a little "thing" called The Tonb of Ligia I think it was made into a movie.


AND EAPoe, I seem to recall, (from a Poe course I took U of Md. 1964 from a Poe Scholar) that Poe invented the short story form or detective-shor story form)

so many "great" writers 'cut their teeth' via newspaper writing-reporting... and covered The Gruesome 'stiff' like Lafcadio Hearn
(who I think introduced America to haiku

Another interesting note about Poe: His most famous poem inspired the name of an NFL team that recently lost to the Steelers.

I rather liked both titles, Witchfinder General and conqueror worm. I've seen excerpts from this but never seen the whole thing.

Ah, Lafcadio Hearn, one of my favs that you don't hear mentioned everyday. There is some grist for a post or two there, no doubt.

Tomb of Ligeia another Roger Corman extravaganza - based on a story, not a poem, though.

On your blog you ask about films based on poems ...

Think outside English lit and there are plenty. In Russian, for example there are lots of films based on Pushkin and Lermontov poems, for starters, including the 1999 Onegin based on the "novel in verse," Pushkin's Yevgeny Onegin. Goethe, the Rubiyat, Chanson de Roland . . .

Hope all’s well with you (congrats on the Steelers’ progress!)

never heard of that movie before, but it looks pretty violent. "the conqueror worm" has always been one of my favorite Poe poems.