Today, Lafcadio Hearn is probably best remembered for his artful adaptation of Japanese folktales and ghost stories, including the collection Kwaidan (full text from google books), subtitled "Stories and Studies of Strange Things." He certainly was instrumental in the introduction of Japanese culture to the West in the late 19th century. He lived an amazing, storied life which is captured skeletally in a Wikipedia article. Coincidentally, two versions of his life have been done as geographic biographies, tracing it via the places he lived and went (giving that storied part of his life a different sort of multi-dimensional spin). The website Exploring Lafcadio Hearn is one. Another is the following video presentation, entitled Lafcadio Hearn's footprint in Matsue (notice how in every picture of him, he looks away from the camera: he was blind in one eye from an early age):

His range and diversity was astounding; he was a translator, journalist, lecturer, fiction writer (primarily long short stories), literary adapter, essayist, and prolific letter writer. Prolific is the buzzword; in A Lafcadio Hearn Companion, author Robert Gale posits that the 12 volume American edition of his Selected Works contains about 90% of his best work. An 18 volume edition (over 11,000 pages) was published by the Japanese, still not complete. Many supplemental volumes of newspaper collections, letters and other uncollected works have been published. Gale predicts a complete edition of his works will never be published.

There are quite a few volumes of his work available in full view online, including his poetic studies of the Pre-Raphelites. The Online Books Page has even more. Back in the 1890's Hearn wrote articles for the Atlantic Monthly. Some of these are up online, centered around an article on Hearn, Almost as Japanese as Haiku. There is also an article available on Hearn and Japanese Buddhism by the famed poet, translator, critic and Japanese studies scholar Kenneth Rexroth. A hyper-text concordance of 4 of his books may be found at the Victorian Literary Studies Archive. 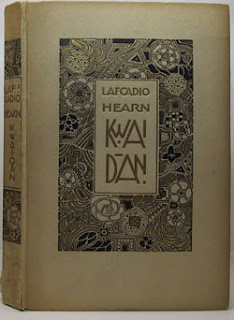 Here is a small excerpt from the conclusion of "Yuki-Onna," a ghost tale from Kwaidan. It is the story of a man who has a strange, supernatural experience in his youth, who later meets a beautiful woman who becomes his "perfect" wife, helping him nurse his ailing mother and bearing him many children. One evening, as they sit talking in their hut ...

---One night, after the children had gone to sleep, O-Yuki was sewing by the light of a paper lamp; and Minokichi, watching her said:
---"To see you sewing there, with the light on your face, makes me think of a stange thing that happened when I was a lad of eighteen. I then saw somebody as beautiful and white as you are now - indeed, she was very like you."...
---Without lifting her eyes from her work, O-Yuki responded:
---"Tell me about her . . . . Where did you see her?"
---Then Minokichi told her about the terrible night in the ferryman's hut - and about the White Woman that had stooped over him, smiling and whispering - and about the silent death of old Mosaku. And he said:
---"Asleep or awake, that was the only time that I saw a being as beautiful as you. Of course, she was not a human being; and I was afraid of her - very much afraid - but she was so white! . . . Indeed, I have never been sure whether it was a dream that I saw or the Woman of the Snow." . . .
---O-Yuki flung down her sewing, and arose, and bowed above Minokichi where he sat, and shrieked into his face:
---"It was I - I - I! Yuki it was! And I told you then that I would kill you if you ever said one word about it! . . . But for those children asleep there, I would kill you this moment! And now you had better take very, very good care of them; for if ever they have reason to complain of you, I will treat you as you deserve!" . . .
---Even as she screamed, her voice became thin, like a crying of wind; - then melted into a bright white mist that spired to the roofbeams and shuddered away through the smoke-hole. . . . . Never again to be seen.


Kwaidan remains his most remembered work, I believe, because the supernatural and horror elements make a universal (and shocking) impression that other genres sometimes do not. This trailer for Kwaidan, a movie adaptation I highly recommend, comes from YouTube. Check it out; there are no subtitles but fear is, indeed, a universal language. No translation necessary (it is, of course, available with subtitles, just not on YouTube). "Yuki-Onna" is briefly seen ...


*** A note. This post was prepared before my recent computer problems, hence the images. I'm trying any number of possibilities to address the issue. Stay tuned. ***
Posted by Issa's Untidy Hut at 6:15 AM

I got in 1977 or 78 the 1977 edition: The Selected Writings of LAFCADIO HEARN (Citadel Press) wit a terrific MalcolmCowley introduction.

"Lafcadio Hearn captured in his writing the soul and mood of nineteenth century Japan. Burt even more lasting was his retelling of the eerie myths and ghost tales of the Orient that would otherwise remain inaccessible to Western readers. [etc]"

he was short, as I recalled and found his proper "fit" in Japan...

this "Selected" is nearly 600 pages... w a terrific Bibliography..

hey DW you sure get in and thoroughly "dig it"!

that's a great story ending, really draws you in right there with her shrieking in his face.

Ed - i got snow too but have to go to work... enjoy being snowed in!

At the risk of sounding clichéd, I'll go all out and say that Hearn was a true pioneer. I'm especially fond of his collections of what appear to be random pieces, "miscellany" of sorts (to me they've always seemed similar to 'The Pillow Book' of Sei Shonagan).

Oh, hey Ed... I, of course, am snowed in, too--wow, the DC area really comes to a standstill in ice (at least there are no delays on the red line though).

most of the folks who are in the D.C. area are from warm-weather countries... which makes driving in/through 1 " of snow a daunting task

and, the last time I was on public trans it was a street car!

well, get off at Takkie Park, pick up a 12 pack of Buddha Beer and drop by! I am a mile from the station.


we can talk about Poetry;
such-as-it-is

a note pad and a pencil... and those 5 (necessary) question-rules what, when, how, why, who