Among the Flowering Reeds 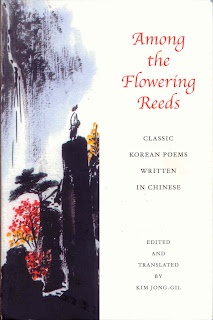 With Among the Flowering Reeds: Classic Korean Poems Written in Chinese, Kim Jong-Gil has performed an astounding acrobatic-like feat of translation, bringing to modern English speaking audiences a genre of poetry as lyrical, philosophical, and important as any in world poetry. These translations are exquisite in the sense that they are at once precise, evocative, poetic, and faithful to English, the language into which they are translated. Part of White Pine Press's "Korean Voices" series, which in turn is part an overall catalogue of some of the most outstanding poetry titles offered anywhere, Among the Flowering Reeds is a must read for those who love Asian poetry in its many glorious manifestations.

Why Korean poems written in Chinese, you may ask? The reason is that Korean as a written language (hangul) is relatively recent, dating back to the 15th century. Previous to that, classical Chinese, wen yen, was used in Korean literature, as it was for most East Asian literatures. Since there were significant differences in the two languages, the development of hangul became necessary. However, hangul as the written language took some time to catch on and writers and poets continued to use Chinese characters well into the 20th century. As a result, much of Korean literature was originally written in Chinese.

Jong-Gil's selection of 100 poems in Among the Flowering Reeds covers more than 1000 years, from the late 9th century into the early 20th. Jong-Gil notes in his introduction that, because of the nature of classical Chinese, he has had to take liberties with the literal sense of the words in order to capture the poetic and rhythmic quality of the original. How this has all been translated into not just competent, but lyrical, near flawless English is an accomplishment to be held in deep admiration.

Of the 100 poems I marked 27 as outstanding, to be returned to for further review. Many are written out as basic quatrains, whatever there original forms may have been. There is a quiet subtly to these works, delicate yet strongly resonant of life experience. Here is a small taste:

At My Study on Mount Kaya

The frenzied rush through the rocks roars at the peaks
and drowns out the human voices close by.
Because I always fear disputes between right and wrong
I have arranged the waters to cage in these mountains.


Night Rain on the River Hsio-hsiang

A stretch of blue water between the shores of autumn;
wind sweeps light rain over a returning boat.
As the boat is moored at night near the bamboo,
each leaf rustles coldly, awakening sorrow.


At a Station House

Through nearly fifty years in the lifespan of a man,
I have had little luck with my ill-fated career.
What have I achieved these years away from home?
I have returned empty-handed from so far away.
Still the forest birds warble kindly to me;
the wildflowers, wordless, smile to make me stay.
But the devil poetry always nags at me;
together with poverty, it it the root of all my grief.

Now shine, now rain, and rain becomes shine:
that is the sky's way, as well as man's.
My glory may well lead to my ruin;
your escape from fame will bring you a name.
Flowers may open or fall, but spring doesn't care;
clouds will come and go, but mountains do not argue.
Men of the world, you must remember
you won't find happiness where you crave joy.

Mountains rise over mountains and smoke from valleys;
the dust of the world can never touch the white gulls.
The old fisherman is by no means disinterested;
he owns, in his boat, the moon over the west river.

At an edge of the sky, I grieve for my youth;
I long for home, but home is still far away.
As spring lets loose the wayward east wind,
no one owns the wild peach, but it bursts into bloom.

The chrysanthemums are slow to bloom this year,
I have found no autumn joy by the eastern hedge.
Heartless, indeed, is the west wind: it blows
into my greying hair, not yellow chrysanthemums.


These translations are so smooth, so seemingly effortless, they seem to not be translations at all. Get it at the library, get it at your favorite independent bookshop, or, best of all, get it directly from White Pine. Support the small press.


This week's featured issue of Lilliput Review is #170 from July of this year. With this issue, I will have featured highlights from regular issues over the last 20 years on this blog. It's really hard to imagine that there have been over 360 posts here since Issa's Untidy Hut started back in November of 2007. Many poems were also featured at the previous short-lived blog, Beneath Cherry Blossoms, before it. I'm still weighing how to proceed. Meanwhile, here's some highlights from #170. Enjoy.

Poems hanging among the weeds, some :: so easy to read

The current green.
The lily of water.

thanks for your "paying attention... and this link

to 'thicken the stew'

in 1998 The Metropolitan Museum of Art (NYC)

The Arts of Korea Gallery ( I think that it is permanet)

and together with Yale U Press put out an
huge book of it all..
now

when this "show" came to D.C. to The Smithsonian Institution's Freer/Sackler I went several times

maybe a complimentary addition to the White Pine "stash"

Thanks, Ed - there have been a couple editions of this one over the years ...

Always go to the Sackler wherever we hit DC. Went there by chance the 1st time, to see a woodblock artist, who spoke while he worked. Told the story how he dropped out of med school (Japan), alienated his parents, wandered about, saw some prints in a shop window, asked after the artist, was referred to his house. Went there, knocked on the door, asked to become an apprentice, had the door slammed in his face, came back the next day, same thing, finally back a 3rd time, they took him in. He scrubbed the floors and go-ferred for a few years, finally was allowed to do very minor things, worked for 10 years to become a master woodblock artist. They gave him food and board for the whole 10 years, he paid back once he became accomplished, which is how the arts work there. He was left-handed, which added a whole other level to creating and printing reverse-image block prints.

Sad about his family - he had spent the school money and they never reconciled. But, damn, was he great; what's one less doctor among friends?

Looks like my library has the Arts of Korea book so will check it out.

Thanks for thickening the stew, as always ...

Ed, your email seems to be bouncing back ... did you get 2 messages I sent today? Don

very intersting. There's certainly a different kind of sensibility there. You can tell they're not written by American writers.

"they" got good stuff at the Sackler and Freer

not sure why emails bouncing back you using

Ed, still getting this bizarre gobbledygook back.

Are you getting my messages?

well
my son's computer is my email server

so things come and go through his home-made
system and Linux
I guess that he did some programming tweakingf and a squiggle is not in the write place... I emailed him so if he got the email from me he will re;co-noitter the sitiation...

I also did a UBUNTU update earlier which may have done a boo-boo.

meanwhile
all of my vast phans will just have to bide their time.

geeze, it sure is complicated when one depends!

Hi Don, I've got a techie question for you. Where did you get the email subscription gadget in the top of your right-hand sidebar? I can't find it via the gadget window in Blogger...

Hi, Lisa: I just learned about that from a colleague @ work - I'd been looking for a long time. You can get via Feedburner.com. You need to register your site and it's all pretty painless. Google bought out Feedburner awhile back and it all seems to be running smoothly for me. Nice to give folks lots of options.

Thanks, Don! I think I've got it set up properly on my blog now. Appreciate the help. peace.

L, I subscribed to test it out - looks like it's working fine. Don