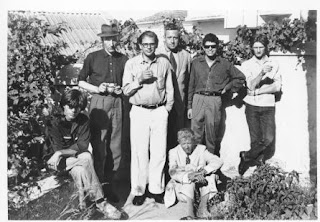 Here's a little something I never expected to happen on Issa's Sunday Service: a LitRock instrumental. Not only is it appropriate but, considering the circumstances, it's perfect. This week saw the birthday of guitar impresario, Adrian Belew, whose studio and solo work, and contributions to the groups The Bears and King Crimson, are the stuff of legend. Particularly his instrumental contributions are legendary, though his lyrics are pretty amazing, too.

So, how is an instrumental, in this case "Sartori in Tangier," LitRock? For those who know a bit of Beat history, Tangier looms large. It is where Bill Burroughs went while avoiding legal complications, following the path of Paul and Jane Bowles. On my wall right now I'm looking at a famous photo of Burroughs, Ginsberg, Peter Orlovsky, Alan Anson, Corso and Bowles posing in Burroughs' garden in Tangier, 1961 (Photo above). In addition, it alludes to Kerouac's novel, Satori in Paris, in its title. Satori, of course, is what all were seeking; in English parlance, enlightenment (NOTE: as pointed out in the comments, the actual title is Sartori, not Satori, but the pun seems intended and, in the end, seems a wash) .

This cut comes from the King Crimson album, Beat, which also supplied the sixth song in this series, "Neal and Jack and Me." Also included on the album is a cut entitled "Heartbeat," which may be an allusion to the Beat Heart Beat by Carolyn Cassady, wife of Neal. "Neurotoica," another cut on the album, refers to a Beat magazine of the same name and "Howler" gets its name from the original, Mr. Ginsberg himself. So, if ever there was a Beat rock album, this is it.

Ironically, "Sartori in Tangier" actually features the work of the other guitar impresario in the band, the incredible Robert Fripp. On this cut, Belew ably backs up Bill Bruford on a 2nd set of drums. Just watch the following live performance and attempt to keep your jaw from hitting the floor.

This week's poem comes from issue #55, April 1994. The issue was previously featured in a post back in January of this year.

Here is the mountain
from which no one has fallen.
Here is the lake
where no swimmer has drowned.

Here is the gun
that was never loaded.
Here are the toys
that have never drawn blood.

Here is the revolution unbetrayed.

Here is the poem that saved a life.

autumn mountains
one by one
the evening falls

Charles, I'm with you ... that youtube cut is tight, searing and deep, all at once.

I would like to point out that the actual title to the tune is "Sartori in Tangier". This does not make your comments any less valid however, since the thrust of the album would indicate such a likely interpretation. I have also wondered for some time if this could have been an unfortunate misprint or some form of intentional wordplay of which the band were often fond. Then again, it could just refer to an encounter with a Moroccan tailor.

James, many thanks for the heads up. I've corrected the spelling - I think I picked up the incorrect spelling off the YouTube video, but chances are I would have misspelled it anyway.

Fripp and company always keeps us on our toes. I appreciate the correction.