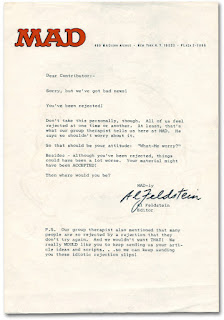 From Letters of Note


I stumbled across the letter below by Norman Maclean, as well as the one pictured above, on the wonderful Letters of Note blog.  As an editor (as well as poet), I can directly relate to the pain of rejection because it is the stuff I deal in everyday, like it or not.  I believe an editor, especially with poetry, should be as supportive as she can be.  Reading what happened to Mr. Maclean and his, in my estimation, "measured response," brought the pure, heartfelt joy only a certain type of non-violent revenge may bring.

Yes, fellow poets and writers, this one's for you:

I have discovered that I have been writing you under false pretenses, although stealing from myself more than from you. I have stolen from myself the opportunity of seeing the dream of every rejected author come true.

The dream of every rejected author must be to see, like sugar plums dancing in his head, please-can't-we-see-your-next-manuscript letters standing in piles on his desk, all coming from publishing companies that rejected his previous manuscript, especially from the more pompous of the fatted cows grazing contentedly in the publishing field. I am sure that, under the influence of those dreams, some of the finest fuck-you prose in the English language has been composed but, alas, never published. And to think that the rare moment in history came to me when I could in actuality have written the prose masterpiece for all rejected authors – and I didn't even see that history had swung wide its doors to me.

You must have known that Alfred A. Knopf turned down my first collection of stories after playing games with it, or at least the game of cat's-paw, now rolling it over and saying they were going to publish it and then rolling it on its back when the president of the company announced it wouldn't sell. So I can't understand how you could ask if I'd submit my second manuscript to Alfred A. Knopf, unless you don't know my race of people. And I can't understand how it didn't register on me – 'Alfred A. Knopf' is clear enough on your stationery.

But, although I let the big moment elude me, it has given rise to little pleasures. For instance, whenever I receive a statement of the sales of 'A River Runs Through It' from the University of Chicago Press, I see that someone has written across the bottom of it, 'Hurrah for Alfred A. Knopf.' However, having let the great moment slip by unrecognized and unadorned, I can now only weakly say this: if the situation ever arose when Alfred A. Knopf was the only publishing house remaining in the world and I was the sole remaining author, that would mark the end of the world of books.


Of course, the first, rejected book was A River Runs Through It, a hugely popular collection of Maclean's work published by the University of Chicago and later made into a popular motion picture.

Another fine form of revenge of a similar ilk is E. E. Cummings' famed rejection dedication to his aptly titled volume, No Thanks.


don't go geese!
everywhere it's a floating world
of sorrow


And David's alternate translation, in, as he says, more contemporary language:

This one really hits home. We all go through rejection and at the heart of publishing is always ...unfortunately...will it sell? Yet if we write according to what supposedly sells, then why are we really writing? It really is a squirrel cage, round and round. I would love to make a living by writing but it is more important to me to live in my writing...to be alive as I write. Maybe some people can manage both but I haven't so far. I've taken so much strength from the writing lives of Basho, Issa, and Ryokan whose writing wasn't driven by market concerns. I enjoyed the letters you posted. So familiar and so true.

Yes, indeed. It does hit home. Rather than thinking of writing to sell, I like to think of it at an even baser level (emotionally): writing for approval.

It seems to me all of us are putting up are piece of art on the refrigerator for mom's approval. Of course, we are doing it for approval; learning to be better and better at what we do, we get more and more approval. Hopefully, we move gradually away from the approval itself (though never totatlly) to concentrate on the art.

Ouch. So true. I think about this a lot, too. It's funny, really, that we are so needy, fragile.

There's a way to take things, and a way to make something lovely out of it.

It's kind of like learning forms - you work it, think about it a lot, then forget about it.

Needy is it though - sometimes, I still don't know how to accept a compliment!

So very true, especially in this instance.

So very true, especially in this instance.

when I send something out
and it is becoming more and more in:frequently

I include : "Rejection is never an issue"

if you want any of the above
then
you're in this for the wrong reasons !