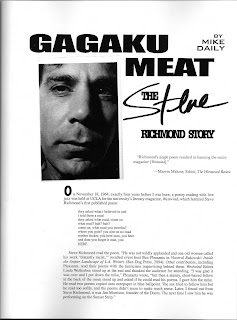 Where does one begin? For those of you relatively recent to the small press scene, the name of Steve Richmond may be unfamiliar. Steve was, in his day, one of the small press giants; a close friend of Bukowski, published by da levy of Cleveland among many, many others, Steve was part of the original mimeograph small press revolution of the 60's which grew out of the Beats into one of the great counterculture movements in US history.

Steve Richmond was a haunted man. He choose to make his demons manifest and they weren't nearly metaphoric enough; somehow, they were real. Most famous for his "gagaku poems," which often portrayed nastily-clawed creatures that tormented and hounded and delighted him, they were all composed to the strains of the form of ancient Japanese court music known as gagaku. There are precious few of these poems around, though there are still a collection or two to be found for purchase. I published four gagaku poems in the early 90's. In the interest of the spirit of the mimeograph revolution, here they are:

they are not so easy to describe

bah
the music is
-over

These examples only give you the merest hint of the power of his work. It was mesmerizing, enthralling, and hypnotic. All of this is by way of an introduction to a brand new book about Richmond (pictured above) by the publisher, novelist and poet Mike Daily, entitled Gagaku Meat: The Steve Richmond Story.

Last year, Mike contacted me asking me if I could share any remiscenses of Steve since I had published him in the early issues of Lilliput Review [pdf file] (I just discovered on amazon an issue of Lillie going for $48.00 because Steve was in it - I quickly listed it at the going rate around here, $1.00) and I was happy to oblige. All in all, the book serves not only as an inquiry into a talented, tortured soul, but as a distinctive chapter in the history of the small press underground movement of the later part of the 20th century. Many fellow poets and publishers are quoted at length here. Mike recounts the history his own friendship with Steve, as well as Steve's relationships with Jim Morrison and Charles Bukowski, and his ungodly descent into a drug addled hell that would have even demons scurrying for safety. It is at once a sad, horrific and beautiful account, much like the man himself.
Here is the blurb for the book that Mike Daily sent along. If you have even a faint interest in Richmond and small press history, I highly recommend it. It is riveting.


Finally to cap off this post about Steve, here's a link to a recent interview with him done at 3 AM. Also a post by the always great Dennis Cooper with material by Ben Pleasants, an edited version of the interview, and some of Steve's poems, and lots of his attitude. Fittingly, Steve's work can be found in The Outlaw Bible of American Poetry. He is still alive and evidently writing again. Here's hoping things are going well for him.
For those interested in his method of composition, something that enthralled me and that I mentioned to Mike Daily, here is an example of gagaku music:

If you do have the opportunity to read Gagaku Meat, you'll learn the well-known story of Steve's bust for obscenity when he published some anti-war material in his magazine, Earth Rose. The cover image may seem quaint now, but the message was and still remains powerful in the iconic way so typical of the counter culture: 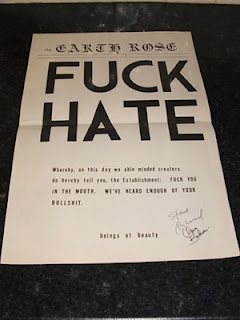 Thanks for telling, Don. I just ordered from Mike Daily. I love Richmond's writing, I hope he is doing well /Henry Denander

you got a "real" address for Mike Daily


no "pal" of mine! tried to sign in with them a year or so ago... must have made a mistake now I "can't get in"
to order the Steve Richmond "thing"

I keep-uh-knockin'
but yuh can't come in

all these "oldie goldies" via silliman a

thanks for all your 'nose-to-the-grind-stone' stuff

it was great to open the Issa link and see something on Steve Richmond. thanks! it's hard to get any of his writing other than the outlaw bible. glad he's writing again.

This definitely looks interesting. I love the examples although my education is sorely lacking since this is the first Time I've heard of him.

What an article! And multi-media! Many thanks.

I'm most amazed you figured out how to post "staggered line" poems.

My guess is that you used pre and /pre HTML. Am I right?

Hey, Henry, good to hear - the work is solid and informative, sad and full of wonder - I just ordered Steve's "Hitler Painted Roses" which is available from amazon. It'll be the first "new" work I've read by him in years.

Ed, I don't have Mike's address on hand (misplaced recycled? the envelope) but I see he has sent you and email ... Silliman's last link post was mammoth ...

Jay, see above ... I was able to order a book by Steve via amazon that is supposed to be a collection of work over the years - he hits home ...

Charles, I confess I thought those little demons might tempt you ...

got the snail-mail address..

so define of "ku" will add another dimension

pretty much opening the doors and windows...
blowing away formal-form-ku

and
consequentially all semblance of how we grade Poetry. or, Politics...

the check is in the mail

JC, thanks ... glad you liked it. thought you might pick up on the da levy connect ...

shit! Jamie took me to this head shp in about 1970 or so I juastsaw a picture of Richmond
I was into cheess at the time rated abot 1200

I l;ayed chess with this guy
in a fucjing head shop!

You just keep making the world smaller and smaller, which is just how I like it at ... Lilliput Review.

Seriously, it seems like you are about .5 degrees of separation from the planet ... chess with Richmond, I can just see those little demon pieces ... D

he was "taken" with me knowing Lasker and that terrific book

the book that taught me: Everything.

Emanuel Lasker's The Manual of Chess

or some such title...

as soon as Jamie finished with his teeny-bopper
we left ended up way north (Eujean. Or) Richmond and that whole Ca 1970's scene scared me

as, all crowds (claques, movements,etc) do

nothing much ecer
happens
in a crowd...

hey Mike... this/yore Gagaku Meat just in... a beauty
and I inhaled it... entirely

po em I done in Greece:


who did the drawing on back of envelope? not signed and dated...

it is "clearly" just another "goddess"

I never would have thought of that. White text. White on white. I use the pre and /pre tags but it reduces the point-size. I'll try your method because it's a better option. Nice workaround.

Ed, thanks for ordering G. MEAT. Glad you liked it. You played chess with Richmond? Cosmic.

My daughter did the drawing on the back of your envelope. She's 2-1/2.

I was digging around the internet looking for Steve Richmond. We shared a chapbook put out by Maelstrom Press in 1983. I just pulled it off from my shelf, and yes, the staples are rusted from the humidity and air pollution, but otherwise it looks good. Steve's side is called "Charleen Ribinski..." and is the Buk turned woman; my side is called "Dry County in Texas," and is poems and prose poems set the strange East Texas when my wife and I were being back to the land hippies. I found from other sites that Steve has passed to be closer to the muses.

Glad you stumbled this way and thanks for the thoughts. All our staples have rusted a little.

Steve was one of a kind. He is big time missed.