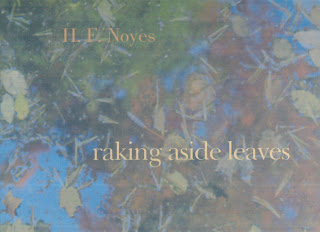 The passing of H. F. "Tom" Noyes last year is a great loss to the haiku community.   His work and his commentary were always of the highest order.  I was delighted to come across a volume in the red moon press postscripts series, raking aside leaves by Noyes, at the recent Haiku North American Conference in Seattle.

His work is grounded in principle, both of philosophy and form.  When I read his haiku, invariably I think of the sureness of foot and purpose in the translations of R. H. Blyth.

This writer could bestow no greater compliment.


In this poem, the above comparison to Blyth is obvious for those who know him.  Though no where near as great a compliment, of this one I would add I wish I wrote it.   Aside is the swing word here; bring no previous bias and a reader can see it may be taken at least two ways.  Has religion been put deliberately aside (perhaps not to be returned to) or is the experience of the plum blossoms and pussy willows a religious experience, plus so much more.

Lovely.  A poem one might end a war with, if politicians were poets, or even simply sensitive readers.

spiral nebulae
through the telescope's sites―
longing to love


Here the word we pause at, or miss entirely, or stumble over, is the lowly little to.   Of course it should be for, right, longing for love?   In a poem of nine words, the reader must know that the choice of each individual word is especially deliberate - no slapdash business here.

So, why to?  First, we must look at the set up - looking through a telescope.  What, or how, does this evoke to?  It makes us think of distance, how very far away something is to need a telescope to see it.  That distance conjures loneness.  We all know the feeling of vastness in the night, the infinity of space and how very small, indeed, we feel in its presence.   And then also to on a personal level turns our attention inward.  One longs for love as in one wishes to be love - here, the speaker wishes to love, which may seem a subtle distinction but, when one is alone, it is a big one.

Perhaps the biggest of all.

Now, another aspect of love is examined:


This poem captures that very tentative time, most keenly felt on a first date but also on other auspicious occasions.  What the poet sketches, puts into high (and humorous) relief, is the dichotomy between the meditative like attention one devotes to the details of the tea ceremony and the bull in the china shop sweep otherwise known as love.


raking leaves aside
on the backyard pond
I release the moon

There are lots of poems out there about the moon reflected in water; Li Po's immediately comes to mind.  But Noyes takes another tack, releasing instead of possessing the cherished object.  There is an implied motion here that suggests a lovely image, indeed.


As the water sneaks
through the beaver dam
the past returns

The literal and the metaphoric dovetail neatly in "As the water sneaks," as they so often do in these poems.  Does the image itself of the leaking dam recall something from the narrator's past, or is it the water that returns again, or both?  Balanced in this poem are the moment chronicled and the past it recalls, a subtle sequencing of contiguous time.

spring cleaning―
your head-mark on the wall
small comfort now

With a note of finality, this poem again ensnares a particular moment and its resonating past.  A poem of loss, with little comfort and, it would seem, some striking sadness.

One of the great maxim's of classical haiku is the moment.  It is, in fact, all there is of life - no past, no present, just the moment.  Yes, there is memory, and it is poignant and influential and real, but only in that moment.  There is no separate existence outside the moment.

Tom Noyes is a master of the moment and, in this moment, he is poignant, influential, and real.


This week's featured poem comes from Lilliput Review, #174, June 2010.  It is a short poem I admire very much, the closing couplet encompassing one of life's great, largely unlearned, lessons.  Enjoy.


Night, I Stand At The Edge


of another new motel parking lot,
the gravel collected from the Ice Age.

Across the Interstate, glow the names
Americans recognize—Hunan, Honda,
Taco Bell.  In the neon—enough like moonlight—
from a hill of impeccable grains at my feet,

ants pour in continual ceremony, none
knowing where they are, none lost.

the ants' road
from peaks of clouds
to here

Seems to often that we lose poets just when they are really beginning to make all the connections and hit on all cylinders.

as CC once wrote:

"do not beg what
you have yet to give"

jeesh was wondering for awhile why no reply to my out-bound mailings to Tom coming back from Attikis!

as for
"plum blossoms
and pussy willows"

That was exactly my point, though obviously I didn't express it very clearly.

The to is what makes the poem great.

Thanks for the wonderful posting about Noyes!

I will carry this haiku with me, always.

Pat, you are welcome ... that little poem is perfect. Don

where sorrow
and joy meet
an old friend

When I came to your post this evening, seeing Tom's photo again and missing such a dear friend... the feelings go deep...too deep for words.
Thanks, Merrill

Merrill, thanks for your very beautiful poem, so very full of feeling ... Don

Don, Tom was like a Father to me, guiding me through the early days for me. The many years of correspondences were always so full of playful fun, but reached into every aspect of life, philosophy and literature. I was quiet overcome when I saw his photo again. Many thanks, Merrill

You are welcome, Merrill. Charlie Mehrhoff said analogous things about Tom over on Facebook - how deeply he touched people. Only knowing him from his work, I feel it was a privilege. This tiny little book, that fits in the palm of your hand, is chock full of wisdom. Don

Hi, Don, Say "Hello" to Charlie for me... I'll look for his post. Many thanks, Merrill


I see it as putting religion aside to find the real world.

Fred, I think the overall beauty is in the ambiguity ... that being said, I lean your way ... Don