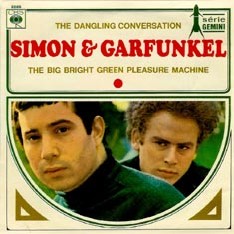 In case of wonky widget, click here to listen


When I thought about this song the other day, I was sure that it had appeared on a previous edition of the Sunday Service. Still, it nagged me, so I decided to check the Litrock from Issa's Sunday Service website, only to find out I was wrong.

How could I have missed this one? "Your Emily Dickinson," "my Robert Frost," hmn. Asleep at the switch again.

It's a still life water color,
Of a now late afternoon,
As the sun shines through the curtained lace
And shadows wash the room.
And we sit and drink our coffee
Couched in our indifference,
Like shells upon the shore
You can hear the ocean roar
In the dangling conversation
And the superficial sighs,
The borders of our lives.

And you read your Emily Dickinson,
And I my Robert Frost,
And we note our place with book markers
That measure what we've lost.
Like a poem poorly written
We are verses out of rhythm,
Couplets out of rhyme,
In syncopated time
Lost in the dangling conversation
And the superficial sighs,
Are the borders of our lives.

Yes, we speak of things that matter,
With words that must be said,
"Can analysis be worthwhile?"
"Is the theater really dead?"
And how the room is softly faded
And I only kiss your shadow,
I cannot feel your hand,
You're a stranger now unto me
Lost in the dangling conversation.
And the superficial sighs,
In the borders of our lives.

So, here's my Emily Dickinson and my Robert Frost. How's about you?

Never Again Would the Birds’ Song Be the Same - Robert Frost

He would declare and could himself believe
That the birds there in all the garden round
From having heard the daylong voice of Eve
Had added to their own an oversound,
Her tone of meaning but without the words.
Admittedly an eloquence so soft
Could only have an influence on birds
When call or laughter carried it aloft.
Be that as may be, she was in their song.
Moreover her voice upon their voices crossed
Had now persisted in the woods so long
That probably it never would be lost.
Never again would birds' song be the same.
And to do that to birds was why she came.

There's a certain Slant of light,
Winter Afternoons –
That oppresses, like the Heft
Of Cathedral Tunes –

Heavenly Hurt, it gives us –
We can find no scar,
But internal difference –
Where the Meanings, are –

When it comes, the Landscape listens –
Shadows – hold their breath –
When it goes, 'tis like the Distance
On the look of Death –

Here's a song that will never make the litrock list but, hey, while we're here (and is that really Pat Metheny taking the solo, and Duck Dunn on the bottom?):

the ducks have gone--
peace and quiet
of the willow

Send a single haiku for the Wednesday Haiku feature. Here's how.
Go to the LitRock web site for a list of all 142 songs
Posted by Issa's Untidy Hut at 10:30 AM

All right. My Dickinson and Frost:

Sweet is the swamp with its secrets,
Until we meet a snake;
’T is then we sigh for houses,
And our departure take

At that enthralling gallop
That only childhood knows.
A snake is summer’s treason,
And guile is where it goes.

ONCE BY THE PACIFIC

The shattered water made a misty din.
Great waves looked over others coming in,
And thought of doing something to the shore
That water never did to land before.
The clouds were low and hairy in the skies,
Like locks blown forward in the gleam of eyes.
You could not tell, and yet it looked as if
The shore was lucky in being backed by cliff,
The cliff in being backed by continent;
It looked as if a night of dark intent
Was coming, and not only a night, an age.
Someone had better be prepared for rage.
There would be more than ocean-water broken
Before God's last "Put out the Light" was spoken.

all the way through
and
precisely into the silence


no "wind in the willow'
here
to disturb the inevitable/reveries

Ed, yes, the perfect silence of the willows ...

Joe, thanks so much, the Frost is quite good, conjuring thoughts of Sandy and friends on the East Coast still coping.

And when does Dickinson not surprise - rarely, indeed - perfectly capturing childhood feelings in a few fleet lines.

Of course, it brings to mind her other narrow fellow in the grass, perhaps more riddle than poem, but a delightful excursion in language, nonetheless.

The Dangling Conversation has to be one of the saddest love songs of all time. Lovely lyrics and beautiful chords.

And one of my favorite Emily Dickinson poems too. What a day!

Thanks, Maggie, that it is. I remember I was so young when I first heard this song I felt like I was overhearing an adult conversation I wasn't suppose to.

And it was important.

Glad, too, you liked the Emily.

Thanks very much, Charles ...

the ducks have gone--
peace and quiet
of the willow
Issa
translated by David G. Lanoue

Such a fine poem, it bears repeating.

Donna, I'd forgotten about that song, though it is truly one of their loveliest. Can't link it up with Emily D, though, but hardly matters. Just to be reminded...

her name is Paula Puglissi and she went to high school
with Paul Simon up in New Jersey and they dated in high school
so this would have been 1959 or before
(PS is my age .... 1941)

now, dig this: when that song came out Paula and me and my friends were in the inner-circle of a psychedelic rock band called The Natty Bumpo... so
we were pretty "hep" to what was what.. AND

Paula said that "I'm the 'Emily' of this song"

note in the opening that reference to a crinoline dress or skirt ?


big in the 50's and 60's those crinoline skirts
as were those cute Italian girls...

my "first" love was Anita Pacentrelli ... I'm yet writing
love poems and love songs to/about her ...

Thanks for the always interesting deep background. I wonder if it wasn't the other "Emily" song that she was referring to?

after all it was merely
near-ly what ? from here
ti there SOME 50 + years ago

and
this second one you put up

well... brings to this old
hermit
chills AND tears

had I but known that
it would be like this

I'd have taken more risks
&
kept my notebooks ...