Sculptures of Silence & Thanks George 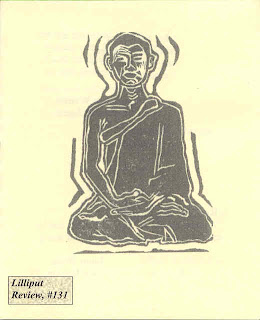 Today is the anniversary of the death of George Harrison. Most folks know the story of George as little brother, always tagging along behind Paul and John. But, when it came to music, though not as prolific, at his best he was every bit their equal. And his spirit was, and is, immense. From Isn't It A Pity:
Isn’t it a pity
Isn’t it a shame
How we break each other’s hearts
And cause each other pain
How we take each other’s love
Without thinking anymore
Forgetting to give back
Isn’t it a pity

Some things take so long
But how do I explain
When not too many people
Can see we’re all the same
And because of all the tears
Your eyes can’t hope to see
The beauty that surrounds them
Now, isn’t it a pity
There is a new chapbook out by Franz Wright entitled Address from the Vallum Chapbook series out of Montreal. I've just read and done a work up of a review for the Small Press Review. It is a limited run of 200 and if you are a fan of Wright, this is his finest work yet. In fact, this is the best book of poetry I've read this year and I have read quite a few.

Continuing the tour through past issues of Lilliput, what follows is from #131, with cover art above by Christoph Meyer.

When the known
& unknown are
one what is there
but poetry?
~ Scott Watson


A Reply to Ars Poetica
A poem should …” says Archibald, and by
the third word has circumscribed our world.
~ Liam Weitz


I think there is a way
to sculpt silence.
Perhaps that’s what
poems are:
sculptures of silence.
~ Albert Huffstickler

I continue to work on new issues, now long since overdue. Hopefully, some will begin to hit the mails in the next two weeks, the rest following shortly thereafter.
best,
Don
Posted by Issa's Untidy Hut at 6:44 AM 2 comments:

Swimming Up Ladders, All Our Different Ways

Contributor copies for issues #159 & 160 went out in the mail this past weekend, so the full run of Lillies will be following over the coming weeks. My apologies to subscribers as things are even later than usual.

I just finished Tristram Shandy today and I can’t praise it enough. Just a fantastic, hilarious piece of fiction. Sterne is right up there with Swift, Rabelais, Voltarie and Cervantes as an early satiric genius, if not the best of them all. Also, I’ve been working my way through Let Us Compare Mythologies, Leonard Cohen’s first book of poems, recently reissued in a 50th anniversary edition. Sadly, I can’t recommend it. A selected edition of his work might be able to scrape 2 or 3 poems from this volume; even that might be pushing it. I enjoy Cohen immensely, both song and lyric. This is just one book that should have remained obscure.

Also I was working my way through Mary Oliver’s House of Light when I ran across this unexpected (by me anyway) gem.

“Make yourself a light,”
said the Buddha
before he died.
I think of this every morning
as the east begins
to tear off its many clouds
of darkness, to send up the first
signal—a white fan
streaked with pink and violet,
even green.
An old man, he lay down
between two sala trees,
and he might have said anything,
knowing it was his final hour.
The light burns upward,
it thickens and settles over the fields.
Around him, the villagers gathered
and stretched forward to listen.
Even before the sun itself
hangs, disattached, in the blue air,
I am touched everywhere
by its ocean of yellow waves.
No doubt he thought of everything
that had happened in his difficult life.
And then I feel the sun itself
as it blazes over the hills,
like a million flowers on fire—
clearly I’m not needed,
yet I feel myself turning
into something of inexplicable value.
Slowly, beneath the branches,
he raised his head.
He looked into the faces of that frightened crowd.


Issue #130 of Lilliput is a broadside of the work of the wonderful Miriam Sagan. Entitled Fish Ladder: 19 Tanka, here is a modest selection:


Through the fish window
we saw the silver salmon
swim up the ladders
of the dam, and thought
suddenly of our lives


Girl-child by the edge
of the sea, you have come down
to crab shell,
rounded
beach stone, tide swell, where
everything changes.

We all give thanks in such different ways … Don
Posted by Issa's Untidy Hut at 7:11 AM 3 comments:

Just back from vacation to discover that the entire Lilliput blog, "Beneath Cherry Blossoms," has disappeared. Thanks, Tripod; six months of postings, with lots of poetry samples, down the tubes. It is the little things in life. I don't really know where to start after this. 8 glorious days in London? An absolutely wonderful vacation of bookstores, museums, pubs and did I mention bookstores? Yes, glorious indeed, despite the horrid rate of exchange on the dollar.

Well, this new blog, "Issa's Untidy Hut," and it will be a bit of an experiment since I don't know where it'll be going from here. I'm going to go ahead and post some work from Lilliput Review #129, as part of the continuing tour through back issues of Lillie. Here's some samplings ....


Well, it seems formatting may be an issue with "Blogger" - let's try another (by the way, I think a dedication to of "Like a blind dog ..." to Tripod seems appropriate ...)

after
all
it's
only
one
wave
- Ed Baker

And, lastly, this little number, which goes out to the memory of all those lost postings from the defunct Beneath Cherry Blossoms:

Mirrorspeak
I'm off Buddha's eight-fold path
No Gods speak to me. Past a blur.
Future
bone
black -
ashes in mountain air.
- Dave Church

My apologies to all, including the above poets excerpted to a nefarious purpose.