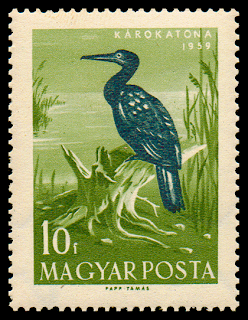 
even the cormorants
on holiday today...
festival


It's time for a holiday break, so there will be no Wednesday Haiku or weekend post this week.

But for those of us who spend some quiet time at year's end and, perhaps, long for a little something to occupy the mind, here you go: a New Years haiku challenge.

Send your best unpublished New Year themed haiku between now and 11:59 pm December 31st. If your poem is selected, you will receive a free 6 issue subscription (or 6 issue extension to your current subscription) to Lilliput Review and the posting of the 'winning' haiku on Issa's Untidy Hut on January 1st.

Cheers to all, and happy, peaceful holidays and a wonderful new year. 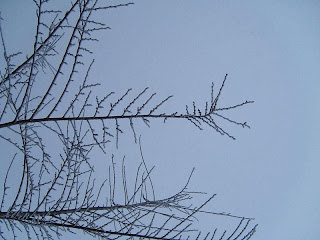 Posted by Issa's Untidy Hut at 3:08 PM No comments: 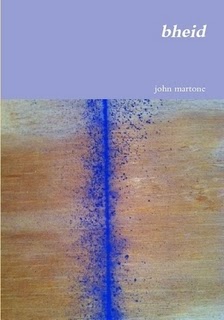 At once a book of ideas and a book of practicalities, bheid, by John Martone, illustrates how one of the finest writers in the short form continues to push boundaries.

There is a narrative of sorts about building: building a boat, a house, a tree, a body, a dream. These are poems of correspondences, parallels between 'the real' and the contemplative.

If you could build an abstraction with a two by four, John Martone would be your man. Not that this is what John Martone is about - he decidedly is not.

But he could be if he wanted to.

In some ways, I feel frankly out of my depth here and so simply will let the work wash over me (again and again and again) and take in what I might. bheid, the word, John notes as proto-Indo-European, meaning to split open (as a tree), and being a root word for the English boat.

There is much to do among titles and the bodies of the poems, some standing away, some at one with the work. The poems are challenging in their very openness, and herein is the boundary pushing.

This is 50 plus pages of brief poetry well-worth connecting to. Here are 4 pieces I keep returning to:

even
a tree's
dead

You can purchase Bheid for $7 at this site. If you'd like to sample it first, you can read it in its entirety here, because John is so incredibly generous.

Speaking of generosity and sharing, you can get another kind of glimpse at John and what moves him via this incredible youtube video, which he shared via email recently, about a woman living on her own in the Siberian wild. It is entitled Surviving in the Wilderness, and here it is in its entirety, 36 minutes in all.

It says all there is to say about human beings living on the planet, giving a greater context for what it is we do everyday. Don't miss it.

And thanks, John.  For everything.

(For those wishing to know more about the lives of Agafia and her incredible family, there is a full length out-of-print book (and out of reach in the rare books market, price-wise) readily available through our national library interloan system. 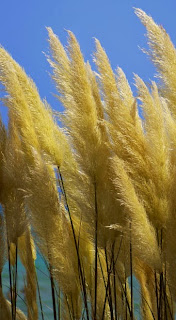 nothing at all
but a calm heart
and cool air 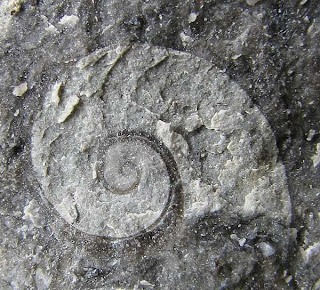 a snail fossilized
in rock -
buttercups

struggling
in the toilet paper roll
a termite 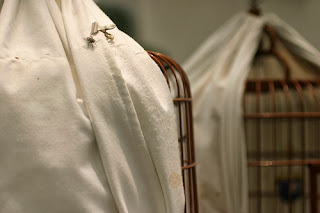 nightingale--
even his shit
gets wrapped in paper 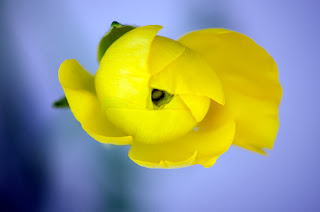 Gayle Elen Harvey: In Memory of a Small Press Poet

As a publisher in the business for some 25 odd years, I get lots of bounced mail. With the advent of the digital age, I've been able to locate quite a few poets who have moved on with a variety of online resources, managing to get contributor copies and subscriber issues connected up with their owners, something that had been previously nigh impossible.

So, when the above bit of mail bounced back, I put it aside for further investigation with a number of others. Before I got a chance, however, I received bad news from long time correspondent and poet, David Chorlton.

Gayle Elen Harvey had died in a traffic accident nearly a year ago.

As David noted, "We can't assume that news travels," even this technology-laden time.

David had heard of Gayle's death from another poet/long-time correspondent, Alan Catlin, awhile back. When he saw Gayle's poem in #190, enclosed in the envelope above, he got in touch with me to pass on the sad news.

Over the years, a number of small press poets I've known have passed on and I'm often shocked at how little is out there about some poets (you will find a list in the sidebar towards the bottom of this page). So, I'm gathering here, in this spot, the six poems I published by Gayle over the years, including the latest, just out in #190 of Lilliput Review.

As you might imagine, Lillie has evolved, as have I, over the years, and now has a more minimalistic, Eastern bent than it did in the early days. Gayle's poems reflect that change of style - on my part, not hers. The poem published in #20, Because, way back in March 1990, stands fairly well, arm in arm, in tone, style, & subject, with Still Hungry, published in the Autumn of 2013.

The poem from #49, Where once they lined up, was from an all-women issue of Lilliput, and can be seen as heightening an ongoing thread this work of what might be described as a chronicle of the constant struggle in relationships.

Because, from #20, was selected as one of the best poems of the first 49 issues and so appeared in #50, which was a best of issue of those early years.

When I began public reading again a few years back, I read a selection of Lillie poems, reflecting my lack of confidence at that time in my own work. Because was one of the poems I read. It is still one of my favorite poems published in the magazine.

Though I found a poem or two here and there by Gayle and a mention in contributor notes searching the net, there seemed to be little of substance. One gem I finally did locate, however, courtesy of google books, is the introduction by Gayle herself to her collection Greatest Hits, 1976-2001, the Greatest Hits series being one originally put out by Pudding House Press and since taken over by Kattywompus Press. This gives something of a sense of the poet herself and is at once straightforward and poignant.

Finally, following Gayle's poems, which are presented in reverse chronological order, is a poem by David Chorlton in memory of Gayle.

for memories, he continues to love her
with deception
and atonal flatteries.
Devotee of serial urges, they’re his own
dark parentheses.

Memory's suckled
with memory.  The mossy foreheads
of stones are dripping
with moonlight.
Nothing is
lost.  Reef after reef, all these sleep-shapes
under our eye-lids
as cranes ablaze
in their arrogant fringes, pattern
the blackness.                           #61


As if spring had not gone away

and what you said would never be safe
with anyone.  Always, starting over,
unconnected to everything else
as if the balance of things
has been changed in the middle
of what is happening.
And you wake, finding nothing
but her shadow
on the last page.                       #57


Where once they lined up

according to size, your words come
muzzled, rushing straight out of
colonial history, Master


Thinking it has nothing to do

you are tired because I thirst for
salt, we turn to each other.
You are barefoot.  It is winter.
This is going to be a difficult story.

promised in the phrases
that carry one thought into another, until
there is light in the language.
Each word

is ordinary before
the one that follows
transforms it.
Paper

could be snow
falling by the ream, or apples
become the scent of rain; always there is

an element of surprise
transforming what we think to the gold

who knew better
how to stretch the words we use routinely

across the page
until they are luminous. 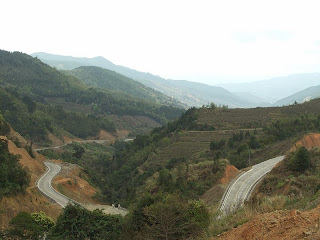 Even  in Kyoto—
hearing the cuckoo's cry—
I long for Kyoto. 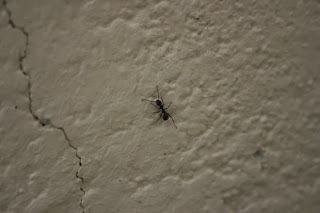 
winter rec center--
on the pool’s deck
one ant 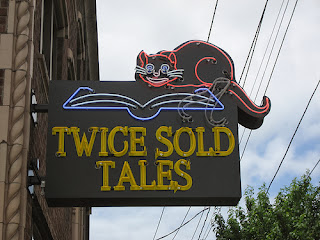 
Sunday morning rain—
a tail protrudes
from under the bed. 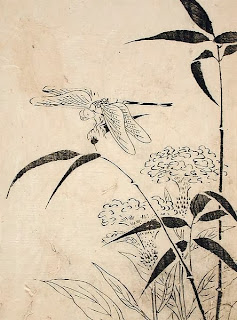 the dragonfly's tail, too
day by day
grows old 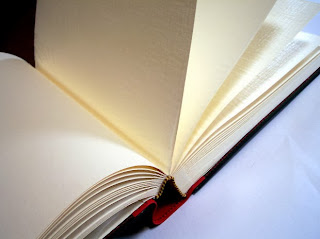 
Traffic was one of the great rock bands with jazz inclinations of the late 60s and early 70s. A multi-talented assemblage of musicians, the band was composed of founding members Stevie Winwood, Dave Mason, Jim Capaldi, and the great Chris Wood.

Today's choice is self-explanatory: the title says it all. A light, airy almost pop piece, with an eerie undercutting of something a bit unsettling. The artist here seems to be balancing life and work, perhaps not too successfully.

Often lost and forgotten
The vagueness and the mud
I've been thinking I'm working too hard
But I've got something to show, you know

Here is a live performance by the band, from early 1972, featuring Stevie Winwood's oft overlooked, formidable guitar chops and some fine flute work by the equally multi-talented Chris Wood, particularly after the first go round. Around the third verse, Winwood is joined by Jim Capaldi for some fine vocal harmonizing. This traditional British folk song, John Barleycorn, dates from the 17th century and is given due respect by this versatile rock band: 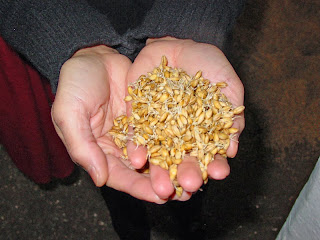 ripened barley--
walking through the field
a little sake vendor 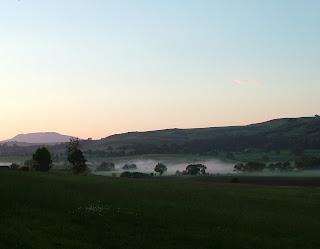 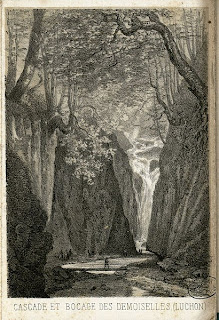 
new moon...
shadows have
no shapes 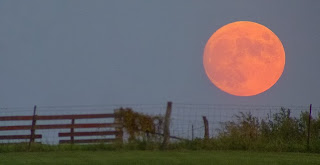 
a great thing
under the harvest moon...
rice blossoms! 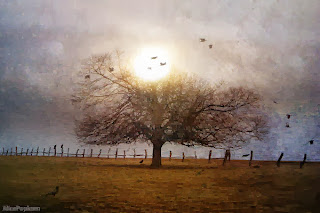 Crows on the North Slope


The mystery is here - who, for instance, are the Gentle - and over 45 years later followers of Merwin know he tills the same soul, while Nature calls the tune. This time of year, as the sun has edged over the horizon I can see for the entire two miles, and beyond, that I walk home from work, the evening movement of, I'm told, up to 16,000 crows every evening across the greater Pittsburgh environs.

If you've never been to Pittsburgh, it is startling to realize how perfectly integrated this mid-size American city is with the natural environment. It would take a lot shorter period of time than most American cities to revert back to its original condition if, for instance, the much lauded Pittsburgh zombie apocalypse ever came to be.

I ran across this poem in an early volume of Merwin's work, entitled Animae, which I found in one of great local used and rare booksellers, Caliban Books. A volume full of wonder. 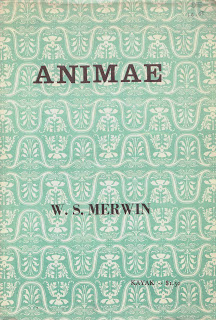 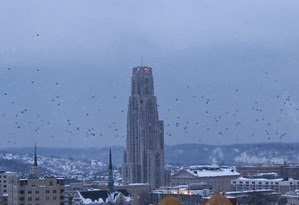 with our gods out of town
they raise a ruckus...
crows