Congratulations go out to Donald Ray Pollock on the publication and largely positive reception of his book of linked short stories, Knockemstiff. Typical reviews have appeared in the L.A. Times and the N.Y. Times. Pollock published three poems in Lilliput back in the late 90's: "Knockemstiff Tattoo #1" in issue #91, "Knockemstiff Tattoo #5" in #94, and "the patriarchs of garage" in #98. All three issues are still in print and available. From #94:


the patriarchs of garage

argue clutch, talk flywheel, question
carburetor. they scratch loose nuts,
pass another pint. they sand, weld
wrench; dig deep into wrinkled packs
of red man, five brothers. they worry
rust, prime and paint. They squat like
kids on cracked concrete and agree with
my father that memory is grease is oil
is water is gasoline is
fading.

A shout out also goes to Keddy Ann Outlaw, whose beautiful, atmospheric photos are featured in one of the two new issues of Lillie (#161). She has mounted one of the photos on her excellent library blog, Speed of Light. Congrats particularly for her recent excellent article in Library Journal, entitled "Born Together: the Literature of Twins."

This week's feature issue is #150, a broadside of the moving, resonant tanka of Pamela Miller Ness, originally published in July 2006. This selection from that 11 tanka set is one of characteristically deep emotion and beauty:


Night
of thunder, thunder
in the dream
I fold laundry
with my dead mother.


A bud
of the red anemone
ready to burst . . .
the child
she never bore.


Kandinsky’s
Impression No. 3:
floating
above a yellow field
the piano’s soul.


Issues 161 and 162 continue to ship as the flu gradually recedes in my rear view mirror. Best, till next time.

Posted by Issa's Untidy Hut at 6:17 AM No comments: 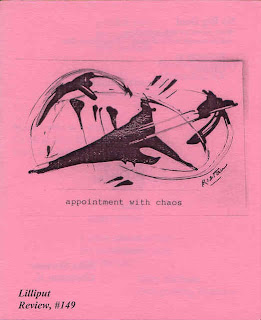 Trying to play catch-up up here after a week plus of illness, to little avail. It is amazing how missing a week's worth of work seems to leave you a month behind.

Speaking of lost time, I spent much of my time in bed with Proust and one could do worse in sickbed companions. When not lulling me gently back to sleep, the last volume of the recent new translation of In Search of Lost Time, Finding Time Again, treated me to airy hallucinations and astonishing feats of remembrance, both fictional (from the previous 2700 pages of In Search of!) and personal. A detailed account of my extended convalescing may be found in a posting I did for the brand new Carnegie Library of Pittsburgh blog, Eleventh Stack. The blog is an interesting experiment; one post a day by one of 11 different librarians on a variety of topics, giving a wide range of both tastes and perspectives, all centered around books, media and programming available through the library.

Lost time not withstanding, I've restarted work on getting the new issues out; currently only contributor copies and a few batches have hit the mails. So, since it's time to put the nose to the grindstone, I'll keep this week's post brief and turn to the latest sampling from a back issue of Lilliput Review.

This week's issue is #149, from February 2006. This selection starts with a poem by John Martone, who has become a regular in the Lillie family of poets; his unique "perspective" here set off a whole round of interesting points of view.


on knees
to enter


Moon works as a word
To lift us over ditches –
Taste it first-hand: moon

And one last parting shot, this time from Carl Mayfield, put it all in the ultimate perspective:


Writing seems
more mysterious to me
now
than when I started
3 thousand years ago.

Hopefully, some of you will begin hearing from me sooner rather than later; in any case, until next week,

The flu has arrived in a big way in Pittsburgh, specifically here at the home of Lilliput Review and Issa's Untidy Hut. I've been out of work over a week and have done absolutely nothing except liquids, bed rest, Proust, Robert E. Howard and David Lynch.

Mostly bed. So, there will be no posting beyond this for this week. Hopefully, I'll be back up and running by next Thursday. My apologies to everyone I've needed to get back to. Everything, specifically new issues and orders, have been delayed at least a week, probably more on the two week side of things.

"One swallow does not make a summer." Marcel Proust.

Though, somehow, I think Issa would be able to make an entire life from one of his single, adored swallows.

Now, where's that bucket of soup? 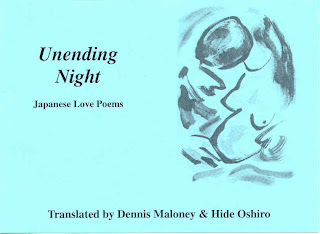 The contributor copies of the new issues of Lilliput Review went out in the mail this past Monday and regular subscriber copies will begin hitting the mails over the next two weeks. It usually takes about a full month to get out the entire run, what with letters to be written, poems to be read and all the attendant details in getting scores of envelopes out each week. 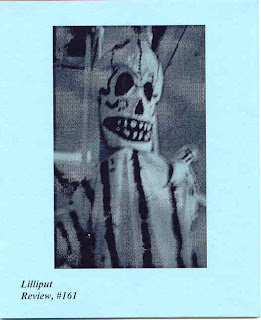 #161 is graced with the photographs of Keddy Ann Outlaw, dedicated to the memory of her brother, Wade Stanton Outlaw. Among others, poems appear by John Martone, W. T. Ranney, Peggy Heinrich, Donny Smith, Charlie Mehrhoff, George Swede and translations of the Japanese tanka great, Yosano Akiko, by Dennis Maloney, 25 poems in all. 25 poems for a buck: you do the math. 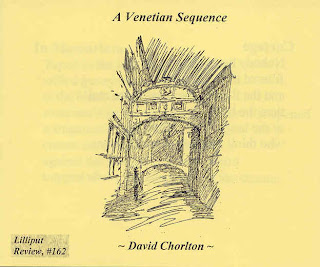 #162 is a broadside issue by David Chorlton, who has been appearing in Lillie since its inception, way back in 1989. David is a consummate artist; this issue, entitled Venetian Sequence, showcases his beautifully lyrical poetry and his own artwork, as seen above. Here's a poetic taste:

His audience applauds,
convinced he is the devil
who never sleeps.
After the performance
he sails to the dead.
Their breath steams out of frozen marble
when he plays. They whisper
each one to the next, that the time has come
to grow back their flesh
and complete abandoned vices. 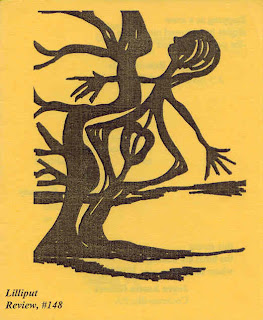 Spotlighted this week is LR #148, published in February 2006. The issue opens with 5 poems by a variety of poets with the common thread of our place in nature: they are deceptively simple. It is a fine coming together of work by 5 grounded poets; it was a privilege to publish. Issa would be proud.

yesterday's snow---
the place it melts
to

this spring
the birds are nesting
where his garden was

Monet
in his private garden
and vice versa

Besides these 5, there are 24 more poems in #148, many like-minded, all worth a look. As with regular issues, back issues from #1 through #160 are available for a buck apiece or a SASE (self-addressed stamped envelope). If the price is still too dear (and who's to say) more free samples may be found in the past posts of this blog or in the back issue archive at the Lilliput homepage.

Finally, there is that matter of Unending Night, as pictured at the top of this post. Unending Night is a selection of Japanese love poems drawn from the classic Japanese tanka anthology, The Hyakunin Isshu or 100 Poems by 100 Poets. The Hyakunin Isshu was compiled in the thirteenth century by Fujiwara no Teika and is the most popular of the classic poetry anthologies of Japan.

This selection from 100 Poems ... is translated by Dennis Maloney and Hide Oshiro and is #18 in the Modest Proposal Chapbook series published by Lilliput Review. The chapbook features the poetry of 18 different classic Japanese poets and provides a unique lens through which to view this much loved anthology. The finishing touches are being put on Unending Night even as I type (i.e. it's being printed) and will be available by the end of the week. Price, as always for chapbooks, is $3.00, postpaid.

best till next week,
Don

Posted by Issa's Untidy Hut at 5:58 AM No comments:


Ok, this is an interim post: a post between posts, if you will. I've been "tagged" by Poet Hound. The tag is entitled "Six Word Memoir Challenge," details of which may be found at the World Class Poetry blog.

In response to the tag, here's my Six Word Memoir:

Single cherry petal,
settling down, down ...


I suppose the ellipsis is, in a sense, cheating, but, hey, I'm not dead yet! Sticking by the rules I'm going to pass the tag on: Ed Coletti, David Giacalone of f/k/a, M. Kei, and LAV of Library Alchemy.

And now back to your regularly scheduled program.