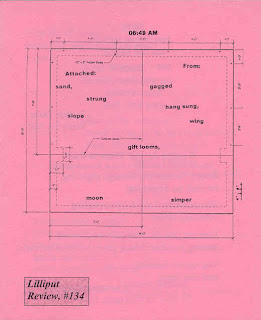 
Last week was the anniversary of the birth of James Wright, one of finest poets America produced in the 20th century. His combination of moving lyricism and deep-felt sadness served as a model for some of the best 20th century poetry to follow. White Pine Press, which I mentioned in my last posting, has recently reissued the wonderful collection of prose/prose
poem pieces The Shape of Light by Wright. Most of the pieces in this book run from a paragraph to a few pages and center around an Italian journey. The following, in its entirety, is one two line sentence that captures the flavor of this resonating book:

You can feel the muscles and veins rippling in widening
and rising circles, like a bird in flight under your tongue.

Also in my last posting, I mentioned the latest chapbook by Gary Hotham in the "Modest Proposal" series, Missed Appointment. Here a few of poems from that collection:

window, window...
the child pressing against
the rain

farewell party---
the sweetness of the cake
hard to swallow

Over the past two weeks, I've added 8 more issues to the Back Issue Archive, each containing 6 poems per issue, for a total of 11 issues. I will be posting more back issues to this archive on a regular basis for general reading and to give newcomers a chance to see what Lilliput is all about. Combined with the samples given in the 7 previous postings in this blog and over 30 postings in the old Beneath Cherry Blossoms (beware, pop-up zone) blog, there are now sample poems from nearly 50 back issues available.

Also, a page of Small Press Links has been added to the homepage this week in my regular effort to transfer over material from the old homepage. Do feel free to suggest other small press links, particularly to pages for Lilliput poets and mags that count themseleves among Lilliput's friends.

So, what is the title of this posting about anyway? Well, over the last few weeks I've been slowly going through Mary Oliver's stellar collection, House of Light, where I came across the following, from the poem Snake:

There are so many stories,
more beautiful than answers.

Frequently, I'm asked for the magazine's guidelines and, of course, I provide the usual, poems under 10 lines, a 3 poem limit per batch etc. But qualitatively, the above two lines might serve very well, indeed.

Finally, it's on to a selection of poems #134, which originally appeared in October 2003:

2003
Just before spring
the war begins

Rain at the window
wood doves of the morning's first
light. How long, how long?

Till next week,
Don
Posted by Issa's Untidy Hut at 6:45 AM

I continue to be amazed by her collections. Individual poems have a sly manner of sneaking up on you. There is this close, sometimes loving, sometimes dispassionate observation of nature, so close in fact that when the revelation comes, you don't see it coming. You know it's coming, you just don't see it, sort of like Ignatz and Krazy; it must be love. Don