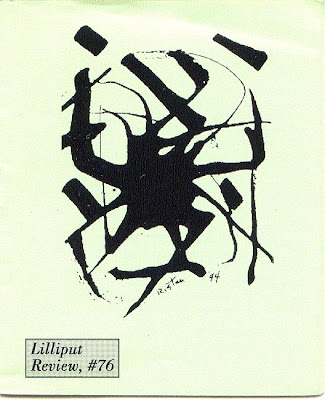 Lots doing as the next two weeks will be somewhat chaotic at my job, so I'll just be skimming the surface here with a couple of highlights, a new feature, a reminder and some old fashioned getting-down. I'm so steeped in Basho that haiku seem to be falling from me like leaves from the plane tree across the way. This morning, in a pre-waking hypnagogic state, a perfect haiku came full blown from nowhere, I'm still stunned. I believe I'll continue steeping as long as I'm able. I'm making progress in both volumes (the Reichhold and Landis Barnhill translations), having read over 500 haiku in each. In the Reichhold volume that is only halfway, well past three-quarters in the Landis Barnhill. I hope to be highlighting selected haiku from both in a future post.

Which segues to a reminder that there is one week left to the deadline for the Basho Haiku Challenge, so if you've been thinking about sending some along, now's the time to pull the trigger. There are well over a hundred haiku already and more would be just the ticket.


While touching on ongoing projects, the Near Perfect Books of Poetry list is approaching the milestone number of 150 (been stuck on 148 for a couple of weeks). So if you have any suggestions, the original offer of the current 2 issues of Lillie free (or two issues added to your subscription) stands.

Since the Near Perfect list has been reader generated, I thought it might be a good idea to feature work from the books on the list when possible. First on the list is Anna Akhmatova's Selected Poems. Here is a typically powerful poem, in a translation by D. M. Thomas:

Why is our century worse than any other?
Is it that in the stupor of fear and grief
It has plunged its fingers into the blackest ulcer
Yet cannot bring relief?

Westward the sun is dropping,
And the roofs of towns are shining in its light.
Already death is chalking doors with crosses
And calling the ravens and the ravens are in flight.

If you have a chance, don't miss the most recent post over at trout fishing in minnesota. Jim has much to say about the qualities of wood, traveling guts, and the voices of a wide variety of trees. Jim's ruinations segued synchronistically with the first bit of fiction I've read in nearly two months (its been strictly poetry with all the program preparation I've been doing). Here is the opening paragraph to Thomas Hardy's Under the Greenwood Tree, which I read about a week ago like a parched traveller at a fresh spring:


To dwellers in a wood almost every species of tree has its voice as well as its feature. At the passing of the breeze the fir-trees sob and moan no less distinctly than they rock; the holly whistles as it battles with itself; the ash hisses amid its quiverings; the beech rustles while its flat boughs rise and fall. And winter, which modifies the note of such trees as shed their leaves, does not destroy their individuality.


This weeks featured back issue of Lilliput Review is #76, from January 1996.


The Marriage Vow
Here and now, we will compose
our own fairy tales,
beginning each fable
with an empty room, an open window.

Wish I Weren't Here
the roots of the nerves of my pain are cut
i am alone on a riverbank
northeast of death and southwest of remorse
i cannot sing. there are no tears.

Empathy
String your feet to mine
I want to walk you through
this century like you were
an easy weight on my back,
or a thousand rose petals
or a building full of wind.

Since the original Ed Coletti suggested video of Ray Charles, Fats Domino, and Jerry Lee Lewis has disappeared into the cosmic ether, here is a reasonable substitute: enjoy.

Thanks for the kind words. That paragraph about listening to the woods is pretty cool and the concidence of the timing made me smile.

Two days ago, I was re-reading John McPhee's essay "Firewood" in which he mentions plane trees, which I had never heard of. Then you mention plane trees, too. I gotta look that up.

I can imagine what the wholesale reading of Basho is doing for you. I know that when I steep myself in a writer or a poet I really begin to feel and experience their voice, and it's such a nice experience. I wish I had the time to do it more often. But also, of course, some writers aren't putting out the material that could hold my interest like that.

It appears (based on some lunch-hour research)that a plane tree and a sycamore are the same thing. I grew up in Indiana. The sycamore is mentioned in the Indiana state song ("...through the sycamores the candle lights are gleaming..."). So that's my excuse for not having ever heard of plane trees -- my limited and provincial Hoosier education.

Hey, Jim, there is the American plane tree and the London plane tree.

They are particularly resilient and do well in urban environments like Pittsburgh. The London ones, which I've seen in England, can be quite amazingly massive. There are a number of them across the street from us where there is an old school/recreation center. One came crashing down across the street a few years back and newly took out my car. Since we've moved our bedroom from the front of the house to the back, just in case.

I love when coincidence ratchets up to synchronicity.

Charles, indeed, it has been something of a journey. I think I've learned about the limits not of just translation but cultural compatibility. What seems to appeal to me are, well, things with universal appeal. There are many poems that require knowing nuances of Japanese culture that, even when translatable, are marginally relevant to all except scholars. And many are obviously not translatable.

Which is why I really love Issa - he traffics in the universal of the human condition. Basho, of course, does, too. Just not so much.

glad you're enjoying Basho. i'm thinking about acquiring one or both of those translations.

Hey, Greg, of the two, right now I'm leaning toward the Reichhold, although they both have their pluses and minuses. Believe it or not, overall I keep going back to the Lucien Stryk and this may be because 1) it is a judicious selection (and by that I guess I mean he picks ones I like) and 2) his trademark brevity. I think Stryk goes after the universal that translates, while both of the others are comprehensive in their own ways. Reichhold's notes are thorough (for me that means I learn why I don't like something) and the translations, on the whole, are better than the Landis Barnhill.

Congrats on the morning Haiku. Let me know if you publish it somewhere so I may read it. I dig the "marriage vow" poem.

how cld I neglect to mention two "near perfect"
books by John Perlman!


THREE YEARS RINGS and
NOTES TOWARDS A FAMILY

I enjoyed the "I Wish I Weren't Here" poem best. I can't wait to hear who wins the haiku contest! I've always loved reading haiku, I just have no luck in writing it.

Lisa, thanks for the note - I may run it by bear creek haiku, who've been so generous with my work I hesitate to send more, but I'll see. The "Marriage Vow" poem seems to have grabbed some folks ...

P, I've received skads of haiku for the contest so I'm looking forward to the winner, too. The deadline is this Thursday, so perhaps they'll be even more. I may have everything sorted out by the following Thursday's post (10/9), depends on how the class and discussion group projects go. I may spin yet another project out of the contest, but that's still to be determined. Glad you liked the poem ...