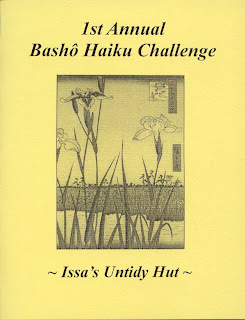 Yesterday, I mentioned that the Bashô Haiku Challenge chapbook is out and available for purchase. It is pictured above. It contains 25 poems by 19 poets in 13 comfortably laid out pages. I thought perhaps I'd gave you a taste with a couple of poems to see if I could pique your interest enough to shell out 3 of your hard earned dollars for a pocket full of poetry. That's right, just $3.00 postpaid.

Yesterday was also the anniversary of the birth of James Merrill, a formal poet I have always had a weak spot for. Merrill's The Changing Light of Sandover, a book length poem composed with the help of his partner, David Jackson, utilizing a Ouija board as lyrical medium, will be the volume scholars puzzle over for decades to come. It is an epic and it is magnificent. Here is one of his uncharacteristically short poems:

A . . . face? There
It lies on the pillow by
Your turned head's tangled graying hair:
Another–like a shrunken head, too small!
My eyes in dread
Shut. Open. It is there,

Waxen, inhuman. Small
The taut crease of the mouth shifts. It
Seems to smile,
Chin up in the wan light. Elsewhere
I have known what it was, this thing, known
The blind eye-slit

And knuckle-sharp cheekbone–
Ah. And again do.
Not a face. A hand, seen queerly. Mine.
Deliver me, I breathe
Watching it unclench with a soft moan
And reach for you.

Finally, yesterday (yesterday was such a busy day, it spilled over quite a bit) was the anniversary of the death of Richard Manuel, composer, piano player, and extraordinary vocalist, whose anguished singing truly evoked his own haunted soul. Though I'm not much for the static photo montage style of video presentation, this is something of an exception, particularly since the lyrics are captioned and the sheer beauty of the song takes your breath away. How truly great this song is, lost amidst the staggering oeuvre of an American band whose uniqueness was unprecedented and never replicated: The Band.

Congratulations on your Lilliput anniversary. Yes, the best is yet to come. The 1st Annual Basho Haiku Challenge is a wonderful beginning to a year of celebration, and enough in itself! It has made its way to the midwest already . . . Thank you! "The Changing Light At Sandover" is a fascinating book indeed.

Cool Don. But I've looked over the page and don't see how to go about ordering one. Can you enlighten me?
I want to order one..

Jeffrey, thanks for the kind words ... glad you liked the volume.

The details - what was I thinking. A check for $3.00 should be made out to "Don Wentworth." The address is in the right sidebar, but let me supply it here also:

get "lost" in my (own) reverie

I was going to ask about ordering info but I see someone else beat me to it.

Thanks, Greg, depending on when it arrives, your's may be the 1st sale ...