Tapping the Barometer, Why Buddha Sat Under the Tree, and Joe Pesci in Pittsburgh 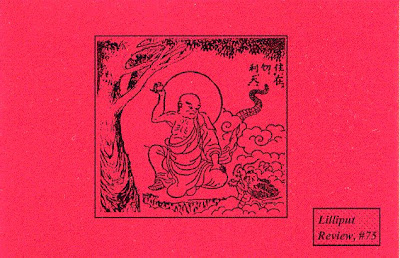 The sad news of recent days is that the death of Hayden Carruth is reverberating through various poetic communities (no, I don't think there is only one, in practice or theory). Ed Baker was kind enough to send along notice, and point to a poem well worth sharing.


This so perfectly captures a day in the life of an aging poet that it almost takes the breathe away with its understated quality and matter-of-fact resonance.

Yesterday's poetry appreciation session went well, though not quite as I expected. Part of an overall package of programs for lifelong learners, the general attendance had been between 15 and 17; yesterday, there were 9. So it was cozy and comfortable. After a half hour intro, we got into the poems and folks didn't quite respond to the questions I'd prepared to stimulate discussion, so the session transmuted into more traditional class, with me riding herd all the way. Folks were much more comfortable with this and, as I pointed out various aspects of the poems (in a declarative rather than inquisitive manner), they began to respond and responded very well. Since I noticed three faces from last year, I didn't want to repeat poems I'd covered then so asked them where to start. One person wanted to hear the Ted Kooser poem ("For You, Friend"), so I told them I had two poems to lead into it and proceeded to show them how one poem directly and indirectly influenced the other. They were taken with the similarity of imagery (which the relationships are built on) and we just took off from there. They were enthused enough with the three poems ("Donal Og - Broken Vows," "Funeral Blues" by Auden, and "For You, Friend), that I decided to stretch it and go for the Shakespeare "Shall I compare thee to a summer's day"), which really spun out well from the Kooser. They loved it, particularly when I read Howard Moss's poem of the same name:

Shall I compare thee to a summer's day?
Who says you're like one of the dog days?
You're nicer. And better.
Even in May, the weather can be gray,
And a summer sub-let doesn't last forever.
Sometimes the suns too hot;
Sometime it is not.
Who can stay young forever?
People break their necks or just drop dead!
But you? Never!
If there's just one condensed reader left
Who can figure out the abridged alphabet,
-----After you're dead and gone,
-----In this poem you'll live on!

I did this in my best "drop dead" Jersey accent and they loved it - when I heard the unrestrained laughter, I knew they were enjoying poetry and, so, I'd accomplished what I came for.

One of the more enlightening moments for me came during the questions that were asked as we were wrapping things up. One person in particular asked why is it that many times when she hears poets read, on places like the NewsHour, they just sound so flat and they drone on and on. As I paused to answer, everyone in the room was either vocally assenting or nodding their heads at this observation and I realized poets are very often their own worst enemies. My response was that I'd chosen works I love and greatly admire and those kinds of works for me contain a great deal of emotion that needs to be conveyed. They are works I believe in.

Everyone seems to lament the fact that no one reads poetry anymore and yet, when we have the opportunity to put our best faces forward, we drone on and on and on. And it is not just a matter of entertainment, though this too is a factor. A woman I ran into at the library an hour after class stopped me to say how much she enjoyed the session and how moved she always is by Auden's "Funeral Blues," to the point she has difficulty listening to it, yet finds it immensely powerful even in the extreme emotion it invokes. She noted how she could never have expressed those emotions in words yet the poet had gotten it perfectly. I told her the old adage was true: we look to our poets to speak for us, they give us our own voice.

That, friends, is poetry, to be touched deeply, to be moved permanently.

If you write something, you better believe in it. And if you believe in it, when you read it spin it like the bottle you want to land on just the right spot ...

In other news, the Basho Haiku Challenge entries will be accepted up until midnight this evening. The response has been quite amazing and I'm very pleased. I finished up David Landis Barnhill's translations, Bashō's Haiku, and had intended to report on that today but am running out of space and time, so I'll postpone it until next week. Suffice to say that of the over 700 haiku, I marked 35 that grabbed me.

Eventually, when I run out of back issues to feature, I've got a couple of ideas about featuring different work here on a weekly basis. One of the ideas I mentioned previously is to showcase work from the books on the Near Perfect list (157 and counting). Though I'm not going to begin that now, I ran across a video of one of the poets on the list, the amazing and powerful and moving Etheridge Knight. Here is a video rendition of his poem, "The Idea of Ancestry."


Why Did Buddha Sit Under the Tree
there is no tree
no Buddha
& no contest.


Why Did Buddha Sit Under the Tree
To learn that
the words of
the prophets are
written on
subway walls.


Why Did Buddha Sit Under the Tree
When you read Nazi books
why do you always turn
straight to the pictures?


Why Did Buddha Sit Under the Tree
Buddha did not sit
under the tree.
The tree stood
next to Buddha.

Best of luck and thanks to everyone participating in the Basho Haiku Contest,

Many years ago, I attended a poetry reading by James Dickey, mostly to impress a college lit teacher. Dickey's reading was anything but droning on. He was enthusiatic, theatrical, impassioned. At one point, in mid-verse, he even stopped himself and crowed "God, that's good!"

We shouldn't expect poets to be actors, but when it happens, it sure is fun!

i like that Caruth poem, and some of those Buddha poems are pretty good!

Glad the poetry thing came off pretty well. Sounds like it was fun. You're right about poets, and prose writers too, often being their own worst enemies when they try to read. I've learned better how to read for an audience over time, but it took me a while.

where'd the part about The Chicken crossing The Street

Jim, glad to hear Dickey was right on it, I have loved some things I've read by him ...

Greg, I was touched by the Carruth poem, too ... I learned a couple of things in that class and pleasantly, at least one of them was about me ...

Charles, I agree, it took me sometime to sort of find an approach to reading in public - I think it helped when I started to read other people's work that way and I could side step my own ego ... it was fun ...

Ed, this is weird, but a poem I wrote way back in '96 with the title "Why Did Buddha Sit Under the Tree" was what prompted the issue ...

Why Did Buddha Sit Under the Tree

To get to the other side.

Minus the chicken, we seem to be on the same wave length on this one ...

And where did that chicken go?

I thought that Lilliput

was all about Johnathan Swift

which brings us back to this "chicken-buddah" schtick:

does a chicken have buddha nature?
and, where is it?


meanwhile, it is here:
http://web.mac.com/countryvalley

After reading the Carruth poem, which is wonderful, and listening to Etheridge Knight, I imagined Knight reading Carruth's poem aloud. I would pay to hear that.

Thanks for giving us an eye into your class. I know I would like to be there.

Ed, Cid too thought Lillie had to do with Mr. Swift - Gulliver's Travels is one of my fav classics - and was just thoroughly delighted at the homage

Why Did Buddha Sit Under the Tree

Cid knows & he ain't telling
and you know why.

Jim, Etheridge was a great reader and that Carruth poem's like gritty sand, it just keeps gritting ...

Thanks, G - I'm sure if you had been there, the class would have been lifted up ...

I have a copy of Grossman's production 1969 of

imagine these old guys Swift, etc writing all that "stuff" with a quill pen! one word at a time. furiously dipping
into
their (ink) well. even grinding stone crushing berries to make their own ink!

Ohhhh for a smudge on the last page of a 'real' book the Japanese way..

Sad news about Carruth's passing. His book "Scrambled Eggs & Whiskey" is one of my favourites.