Basho Haiku Challenge Chapbook, John Lennon, and the Beginning of the World (As We Know It) 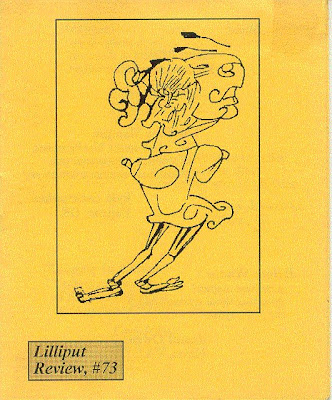 Cover by Peter Magliocco
In next Thursday's post, I'll announce the winner of the Basho Haiku Challenge. The response was so encouraging that my intent is to issue a mini-chapbook of a selection of about 20 of the poems (plus the winner) of the nearly 200 poems submitted. Since this was not part of the original Challenge, I will be upping the prize ante. The winner will receive a brand new copy of Basho: the Complete Haiku, translated and annotated by Jane Reichhold, plus two copies of the anthology collection and a 15 issue subscription to Lilliput Review. Other poets featured in the anthology collection will also receive 2 copies of the mini-chapbook and a 6 issue subscription (or a 6 issue extension of their current subscription).

I expect the anthology collection will appear after the 1st of the year. If all goes well, I can see this possibly becoming an annual event. Stay tuned for further details.

Tonight is the first meeting of the new poetry group I will be co-moderating with my colleague and formidable poet, William the Silent. The discussion group, 3 Poems By ..., tonight will be looking at three Emily Dickinson poems:


The more I immerse myself in these 3 little gems, the more I feel out to sea. They seem as infinite in depth and resonance as the deepest, darkest ocean. My amazement and awe is total and absolute. Simply put, she was a genius beyond par.

If anyone shows up tonight, it should be an interesting discussion. I'm not sure an hour could begin to cover it.

I've finished up David Landis Barnhill's Basho's Haiku, a selection of over 700 haiku translated into English. There are a number of comprehensive reviews out there: one at Hokku and another at Modern Haiku, both of which make interesting points and feature a number of haiku from the collection. In addition, a generous selection of the poems may be previewed at google books. I've also learned from google books that Landis Barnhill has translated Basho's prose, in a collection entitled Basho's Journey: the Literary Prose of Matsuo Basho. A nice selection of Basho's haibun may be viewed there.

Looking over my notes, I see that I marked 35 haiku in this collection for further review. The collection itself is very readable, the notes are somewhat cursory and overall there is a minimal amount awkwardness in the translations. As I've alluded to in previous posts, my inability to feel a more substantial connection to these poems seems to be the result of my own cultural and historical shortcomings. For me, many of the ideas behind the poems are either untranslatable or strictly period pieces, ephemeral in that sense. Here's a selection from the 35 that did grab me:


The above is a selection from Basho's early work. These are undeniably beautiful, imagistic pieces. Here are some from the later part of his life:


Of the poems I've chosen to highlight, the later poems seem to me to be more personal, more human. More Issa-like, if you will. I don't want to misrepresent: some of the early haiku are more personal, some of the later haiku, more workman-like. In general, however, it felt to me that this generous selection of work truly captures Basho's real journey, the journey to self. When I finished, I felt I knew more about the poet than any briefer collection featuring his famous work allowed me to. Of course, many of those briefer collections have excellent translations, surpassing many contained here. But oddly enough, the ones I was attracted to tended to be the ones not featured in any of the "greatest hits" type collections I've read previously. In fact, I don't believe that any of the above have been highlighted in previous posts, which really accents how special this substantial selection by David Landis Barnhill really is.

Though I've talked about highlighting some of the books from the Near Perfect Books of Poetry list, I can't resist dipping back into the Lilliput archive for another issue. Since the last posting, the season has turned to autumn. Temps have dropped, there is a chill in the air and the house, and a general dampness that signals the end of the finest summer I've spent in Pittsburgh in my 17 plus years here. Issue #73, from November 1995, has a nice selection of poems that just happen to fit the season nicely, starting off with some nods to the beauty of the wind. Enjoy.

Before Winter
generous maples!
dropping these crimson haiku
for just anyone

strangers
wind - photographs
linger oh so briefly
before blowing on past

Weeping In Autumn
Tears from the eyes
of the paralyzed Sibyl:
all those leaves wasted?


leaves
softening
each footfall
thinking lovingly
of all lives lost
------

About Man
Some head.
Two feet.
From water.
Through mother.
Into mountain.


Finally in celebration of John Lennon's birthday, here's a little something that just seems to dovetail nicely with our contentious election atmosphere:

Till next time,
Don
Posted by Issa's Untidy Hut at 6:15 AM

I agree that Basho's later work seems more relaxed and more connected in some way. Glad your contest got such a great response.


"on a journey through the word"

cld be title of another (near) perfect book

maybe: A Journey Through Mind


and, also nice to see a John Perlman "shortie" I miss his SHUTTLE (but only the ones pieces out of Restoration Poems were first published in in 1974

the contest chapbook is a great idea. will it be available to purchase?

that cricket haiku is very powerful. i've never seen that one before.

hope the poetry group goes well. sounds like you're passionate about it, and that seems to make all the difference.

Charles, thanks ... the Basho has been a real education for me, teaching me what I don't like about haiku has helped me focus on what I do ...

Ed, Journey through the word, indeed!

Greg, yes, beyond contributor copies there will be copies available to purchase and I plan to make them very affordable. The poetry group was, by library standards (especially for a first session), very successful: 17 participants. There was quite a bit to and fro and we went well over our allotted time. So it goes for doing 3 poems in an hour! I'll probably mention this in a future post so won't blow all the details but it did go very well, thanks.