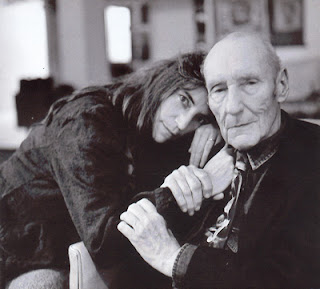 Yesterday was the birthday of the Godfather of Outlaw Literature, William S. Burroughs. This week's feature on Issa's Sunday Service is a most unlikely song by The Rolling Stones: "Undercover of the Night." It seems especially unlikely to me in its ties to Burroughs. The Stones really shouldn't surprise in a career that spans so many years; the breadth of material they have composed is truly amazing. Though it seems inevitable, just in terms of sheer volume, that some songs would be LitRock (and this is their second appearance on ISS), I never imagined any reference to Uncle Bill. Jagger has been widely quoted as to the song's meaning and here's what he had to say:


"I'm not saying I nicked it, but this song was heavily influenced by William Burroughs' Cities Of The Red Night, a free-wheeling novel about political and sexual repression. It combines a number of different references to what was going down in Argentina and Chile. I think it's really good but it wasn't particularly successful at the time because songs that deal overtly with politics never are that successful, for some reason."(quote from Songfacts)


I guess it's honest to admit that I never imagined that I'd ever hear Jagger use the phrase "a free-wheeling novel about political and sexual repression." But, there you go. Cute and lots of brains, too. The lyrics follow:


Undercover of the Night

Down in the bars the girls are painted blue
Done up in lace, done up in rubber
The John's are jerky little G.I. Joe's
On R&R from Cuba and Russia
The smell of sex, the smell of suicide
All these things I can't keep inside

Undercover
all out of sight
Undercover of the night

In further remembrance of Mr. B., what follows is an excerpt of an interview with him from the film The Life and Times of Allen Ginsberg in which he recounts his relationship with Ginsberg and Kerouac and the flowering of his own career.


This week's poem comes from Lilliput Review #65 (February 1995). 6 other poems from this issue were featured in a previous post.


And a poem from that lover of sparrows, Issa:

Lots of sparrows in my yard today. I've read some Burroughs but need to read more.

I don't think I've ever heard anyone else refer to Mr. Jagger as "cute."

I do believe
that
Marianne Faithful
thought that he was:
"cute"

I think that she was
into his teeth/mouth


and the sounds coming out of it.


or was it
Warhol who thought
so?

Charles, all the sparrows round here are hiding from the 21 inches of snow we were hammered with ... though I believe Ed got even more down his way ... by the way, good luck to your New Orleans Saints -

Jim and Ed, alas my lame attempt at "writing" ... though I do believe I've heard others refer to his cute ass ... at least back in the day ... Jim, glad you liked the tune - Ron Wood said there was a much better acoustic version floating around but those were the Stones disco-ish days so ... you are right about that nice bass - and, ya know, Ed, the older Marianne Faithful gets, the "cuter" she gets - I've always had a soft spot for this craggy tune ...

I know I'm going to regret this comment but I'll just blame it on my delusional state brought on from shoveling for the last hour ...

i got tears in my eyes

dig how this builds SOME bass-line...

or is it base-line

or is it rhythm... all elements of narrative working here even a hint of British accent..

Ed, I see this comes from ilike and so I gotta say I like!

Poking around I see also she has done versions of Poe, Greensleeves, Lewis Carroll ... I got a couple of more weeks of stuff for ISS.