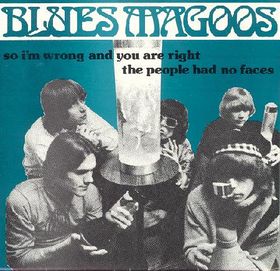 Though largely forgotten today, there was a time when Erskine Caldwell's Tobacco Road was a publishing and cultural phenomenon. In this excellent review for Slate by Dwight Garner, his assessment moves from a "greasy hairball of a novel" to


Yet Tobacco Road's cultural reach—thanks in part to a folksy Broadway version of the novel—is long and complicated. You can trace the intensity of Caldwell's vision in Tobacco Road right up through the undervalued and largely out-of-print novels of Harry Crews, and even through those of—though it is mildly heretical to say this—Cormac McCarthy. Without Tobacco Road, it's almost impossible to imagine the arrival of Hee-Haw and The Beverly Hillbillies, not to mention Deliverance.

within two graphs.  He notes that Faulkner and Cowley admired it and Saul Bellow thought Caldwell should have gotten  the Nobel Prize.

The roller-coaster effect is duly noted.

The Blues Magoos are something else again.  Their influence on bands to come might justifiably be compared to  Caldwell's above - this is a band that put the g in garage and p in punk, at least in terms of who listened and learned.  A staple of psychedelic 60's compilations and charter members of the Farfisa Hall of Fame, this band may qualify as the first professional rock band I ever saw:  they played a mixer at my high school.

That's right, we were all up there and dancing.  It was all low lights and trippy and the Marist Brothers had not yet gotten a clue ...

"Tobacco Road" was a song that seemed to be recorded by every rock band, sharing only its title with Caldwell's novel which seems not to have been its inspiration.  Inspiration or no, the title is certainly more than a coincidence and so qualifies the song for this week's Sunday Service.  For a bit of history on the song, check out this website of songs by its composer, John D. Loudermilk.  Scroll about halfway down for the dope.   Here is Loudermilk performing it for the BBC in 1984:


While looking around for a live version of the Magoos best known song, "We Ain't Got Nothin' Yet" (or really anything live from the 60's - there was a lot of lip-psyching going on back then), I stumbled on this live performance of "Tobacco Road," introduced by Jack Benny.  When the song ends, Benny comes back and does a routine with the band that is so painful it just can't be missed.

in a dewdrop world
singing of dewdrops...
summer cicada

Yeah, that little bit between Jack Benny and the band falls flat, but (as you point out), that makes it all the funnier.

Jefferson Airplane did a very solid version of Tobacco Road which I was lucky enough to see live back in the day. Thanks for posting this. And that Hartenbach poem is marvelous!

Hey, Jim, was that pre-Grace Slick? I know they recorded it with the first vocalist, Signe Toly Anderson.

My first piece of "published" was a review of "Surrealistic Pillow" in my high school newspaper. I was a big fan of West Coast psyche, particularly the Airplane and Quicksilver.

Jack Benny? that's just his "schtich" and his second-rate writers...trying to be phunny for his massive audience ... better dropping our harmless joke-bombs on people than
the bombs being dropped in [...]!

Would never dis Jack ... one of my all-time favs. Captured a (un)funny
moment in time, though.

Yup. The album was called Jefferson Airplane Takes Off and the female singer was indeed Signe Anderson. "It's No Secret" was the cut that could be called a hit, along with their version of the folk-rock chestnut "Let's Get Together." I have the original vinyl. What am I bid?

Thought it might be. I'm thinking I've got a copy of that album under a pile of cds, which are on top of a pile of cassettes which are ...

I've definitely heard quite a few different versions of Tobacco road. I think even David Lee roth did one.