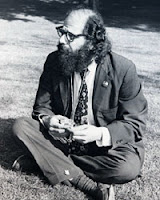 Recently, I listened to a reading by James Wright at the Guggenheim Museum on March 20th, 1964.  On this occasion, he read two of well-known poems from The Branch Will Not Break: "Lying in a Hammock at William Duffy's Farm in Pine Island, Minnesota" and "Depressed by a Book of Bad Poetry, I Walk Toward an Unused Pasture and Invite the Insects to Join me."

He introduces "Lying in a Hammock ..." in this manner:

"Robert [Bly] and I were down there [at William Duffy's farm] and I was trying to write a review of a bad book.  One thing led to another and I finally wrote a bad poem about not being able to write the review and got drunk and hungover and then wrote this, or part of it, on the back of it:"

He then says, by way of introducing the next poem:

"That really was a bad book because it was full of screams and exclamation points.  I think I'll read the poem about being unable to review it:"

Depressed By A Book Of Bad Poetry, I Walk
Toward An Unused Pasture And Invite
The Insects to Join Me

Relieved, I let the book fall behind a stone,
I climb a slight rise of grass.
I do not want to disturb the ants
Who are walking single file up the fence post,
Carrying small white petals,
Casting shadows so frail I can see through them.
I close my eyes for a moment, and listen.
The old grasshoppers
Are tired, they leap heavily now,
Their thighs are burdened.
I want to hear them, they have clear sounds to make.
Then lovely, far off, a dark cricket begins
In the maple trees.

There is a pause, and then he says, with more than a hint of sarcasm:

"I saw the best crickets of my generation
starving hysterical naked ..."

This, I believe, says a lot about the state of American poetry at that time; as in society, there was a deep contentious divide between the old and the new; so too with poetry.  Ironically, Wright himself had been considered, justifiably, a departure from the old.  But things were changing at lightning speed.

As anyone who has read this blog for any period of time knows, I love the work of both Wright and Ginsberg.  This reading, however, gives a little context to the cultural history of "Howl" and how very courageous and revolutionary Ginsberg was with the publication of his work in general and "Howl" in particular.

Since it would be hardly fair to leave it there, representing one point of view, let's finish with this:

The feature poem this week is by one of the best kept secrets in the Pittsburgh poetry world: Bart Solarcyzk. I've published more of his straightforward, resonating short poems than most anyone I can think and intend to keep doing just that till he runs dry or screams uncle.   This one, from Lilliput Review #126, July 2002, is a gem of miniature narrative, re-imagining only slightly a scene familiar to many a devotee of Chinese lyrics in general and Li Po, in particular.  Enjoy.


A hat full
of wine
by the river

the moon
in my hand.

Email ThisBlogThis!Share to TwitterShare to FacebookShare to Pinterest
Labels: Allen Ginsberg, Depressed By A Book Of Bad Poetry, Footnote to Howl, James Wright, Lying in a Hammock At William Duffy's Farm

Fascinating. I like Wright and Ginsberg at the same time too. Had no idea Wright didn't share my enthusiasm for Allen.


Great poems, by the way.

Such literary fist fights are always intriguing. Often I'm left scratching my head as to what caused the rift. But at the time I'm sure Wright's reasons were clear to him.

Bruce, thanks for the note. In email, another poet commented that Donald Hall mentioned he didn't like Ferlinghetti much (and my correspondent suspected Ginsberg, too) at first, but changed his mind later.

Sometimes the new can be just too much to assimilate at the time.

Glad you liked the poems.

Charles, as you say, to each his own, so to speak.

Thanks Don. I appreciate your kind words.

I'd always been curious what book of "bad" poetry it was that Wright was referring to in that poem. (I like Wright's and Ginsberg's poems both, maybe a little more partial to Wright overall but like to read both of them.)

From what you've quoted here (and I haven't followed the link yet to the reading by Wright), it's not quite clear to me if the book Wright was referring to was specifically Howl and Other Poems, or possibly one of Ginsberg's other books. Howl was published in 1956. The Branch Will Not Break was published in 1963, and by that time Ginsberg had also published Kaddish and Other Poems (1961) and, possibly, Reality Sandwiches (1963, same year as The Branch Will Not Break). Even though Wright hints at "Howl" in his comments, it might have been one of Ginsberg's more recent books that he was trying to review. Just speculating here -- if I get ambitious I may go digging in Wright's Selected Letters and see if there's any information about it there.

I feel a somewhat personal connection with Wright's Hammock poem. William Duffy (the co-editor of the early issues of Bly's magazine The Fifties/The Sixties etc.) taught high school English for many years, and one of his students, poet Jim Dochniak, is a long-time close friend of mine and -- many years ago -- published one of my early books of poems.

Duffy himself wrote a little poetry, and sometime during the 1960's he and Bly published a book, The Lion's Tail and Eyes, of poems by Bly and Duffy and Wright.

A few years ago, the University of Minnesota (where Wright taught for a few years, until he was denied tenure and fired by department head Allen Tate) held a two-day poetry event in commemoration of Wright and his work, which took place in a new Special Collections building of the U. of Minnesota library. The library included a display of some of Wright's personal papers and other documents which are housed there.

Among the items on display were notecards that Wright kept to keep track of submitting his poems for publication -- each poem had a card, with a list of the magazines where he had sent it. The card for the Hammock poem listed, I think, three or four magazines, don't remember specifically but they were "big" ones like Atlantic Monthly, Harper's, places like that -- and the last entry was The New Yorker, and next to that was a note by Wright, "Accepted, by God!"

Thanks very much for all the info and corrective. I believe it is possible that it might have been a later book.

One thing that might be worth checking in terms of a timeline is when Bly and Wright were up at Duffy's farm. Because the time of composition of the poems will be of paramount importance. He wrote the poem about the time he was trying to write the review about the bad book of poetry. That, I think, may put it back into the late 50s, though I could be wrong.

The link I provided only takes you to a list of poems on the CD reading. There are 2 readings, one from 1978 and one from 1964 - the 1964 is the one I transcribed from. There is a reading on the webpage I linked to of "Lying in a Hammock ..." The parts I transcribed come from Cut 11, "Introduction to Depressed by a Book of Bad Poetry," and Cut 13, "Introduction to Outside Fargo, North Dakota."

I really appreciate the details you provided that sketch in an extra dimension to not only this anecdote, but to Wright's work which, frankly, I cherish.

I wonder if Wright's disgust toward Ginsberg went beyond the punctuation. Was he shocked at the references to sodomy, for instance, or by the long lines?

I liked Wright's poems that you cite.

I wonder too if his stance toward Ginsberg's poetry changed at all over the years, and whether the two poets ever met, or had any correspondence later on.

Many poets that didn't like Ginsberg's writing at all, did like Corso's writing. Randall Jarrell for instance disliked the Beats in general, but liked Corso's work. Corso lived with Jarrell for several months in the summer of 1963, I think it was. Corso was not the best house guest, and Jarrell was glad when Corso moved on. Another poet that thought the Beats sucked but liked Corso was Robert Lowell. I wonder if Wright knew Corso's work.

I think your speculation about Wright's opinion of Ginsberg changing over the years is probably correct. I have a volume of Wright's selected letters here and, though there are no negative references to Ginsberg, there is at least one positive one and maybe more. I'm going to delve into this further when I get some time.

The ever changing nature of poetry, and society, at that time was one of things that struck me about Wright's comments - in some ways I think it can be ascribed to the shock of the new.

I often think of how many records, which went on to become favorites, upon hearing initially I thought, "What's that? I don't like that," only because it didn't sound like anything I'd ever heard before.

Corso seemed to have a classical strain, with some formalist elements, which I think appealed more to the traditional poets, then and now. I've never entirely warmed to him, which probably reveals my predilection for the less formal.

Jean Coceatu once opined, and I think this is very relevant here: "We tend to judge what is beautiful by what is familiar." Meaning, the genuinely new is always hard to take in at first. That's true for music and poetry alike; and the other arts.

Needless to say, this contentious division in poetry is nothing new, at least for the past century or so, and is still ongoing today.

Your comment, via Cocteau, is absolutely spot on. I've been saying this for years about music and its application here is perfect.