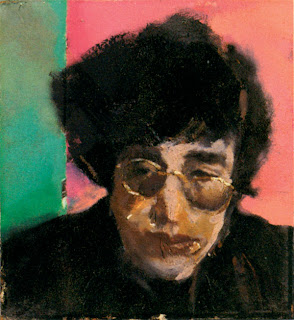 It's three wise kings from the East that bring us this week's selection for the Sunday Service: "Shine On Brightly," by Procol Harum, who are becoming something of a house band.   Perhaps a tad early for Christmas, but it seems their quest was long and nearly endless; our doomed narrator, however, receives the gifts in stead (ahem), presumably giving the Prussian blue electric clock an extra wack for some additional rest for that poor befuddled brain.


Shine on Brightly
My Prussian-blue electric clock's
alarm bell rings, it will not stop
and I can see no end in sight
and search in vain by candlelight
for some long road that goes nowhere
for some signpost that is not there
And even my befuddled brain
is shining brightly, quite insane

The chandelier is in full swing
as gifts for me the three kings bring
of myrrh and frankincense, I'm told,
and fat old Buddhas carved in gold
And though it seems they smile with glee
I know in truth they envy me
and watch as my befuddled brain
shines on brightly quite insane

Above all else confusion reigns
And though I ask no-one explains
My eunuch friend has been and gone
He said that I must soldier on
And though the Ferris wheel spins round
my tongue it seems has run aground
and croaks as my befuddled brain
shines on brightly, quite insane

Though often scoffed at for their art rock sensibility, this live performance puts the lie to any such thought. In particular note one of rock's great, underrated drummers, B. J. Wilson can be seen and heard at his finest.  His performance on the second tune, "In the Wee Small Hours of Sixpence," will no doubt remind many of the late, great Keith Moon, in style, flair, and competence.


This week's features the opening 4 poems of issue #115, from March, 2001.  In fact, let me include the cover, by the late poet/artist Harland Ristau, since the sequence seems to start with that. 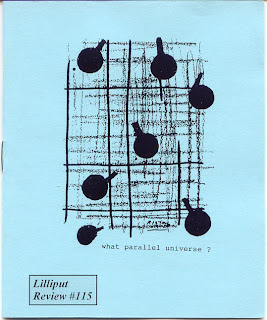 through
the birds
a history of stars

Etude
Eighty-eight keys,
each a telescope trained
upon a single constellation.


Belief
Those who
Believe
The universe
Ends
Stop at
the edge of it.

I suppose the band that I respect most these days for their lyrics is U2. Particularly, bullet the blue sky just leaves me in awe, both for the music and the lyrics.