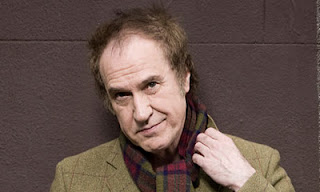 Friday night, one of the greatest singer/songwriter's of the rock and roll era was in Pittsburgh, PA and, yes, Bruce Springsteen was here, but no, that's not who I'm talking about.


I'm talking about Ray Davies, one of the greatest, indeed, and Friday night he proved it.   With a set list full of songs (yes, lots of Kinks era stuff) that an aspiring rock band would give their right arm to have just one of, in no particular order, here is what I pieced together from the set


All that and I know that I've forgotten quite a few.  His accompanist on guitar during the acoustic set was Bill Shanley, who was amazing, and the backing band, which opened with a 12 song set of their own and with whom people didn't get restless for a minute, was The 88, an LA band that has a new wave, Elvis Costello-meets-The Shins quality and musical chops second to none (with more than a touch of Kinks like harmonics).  Here is a taste that may give you a good idea why Davies has them backing him:

And here is the whole shebang, Davies and The 88s together on a recent morning show doing "Lola":

Davies was charming, relaxed, and a real jewel of a performer.  Rabid Kinks fans knew all the words.  I heard two songs I'd never heard before and even they knocked me out. As a poet, his acapella version of "Harry Rag" was enough for me - I was very happy, indeed.

And, oh, yeah, today's LitRock song is an old Kinks tune, deep from their catalog, said to be composed for a TV series in the UK that never came to be.  Shangri-La, a fictional place that has made a previous appearance on Issa's Sunday Service.


This week's poem from the archive comes from issue #62 is by small press legend, and former professional wrestler, the one and only C Ra McGuirt.

only fear
is free.


through the great red gate
no fear...
cuckoo

Oh man, I do love me some Kinks. I was talking about them yesterday at the SF con.

I've been to just a handful of live music concerts in my life (most of my spare money and time going to poetry readings and books of poems etc.) -- the Kinks are among the few I've heard perform live. It was in St. Paul, ca. 1973.

Nice Issa poem at the end of the post. I recall an endnote by Rexroth in one of his collections of Japanese poem translations; as I'm remembering it, he said that the Japanese cuckoo isn't really considered to be related to the European cuckoo, and the bird's song doesn't sound like "coo-coo," the song is thought to sound like the Japanese name for the bird, hototogisu.

Glad you liked the tune, Charles ...

Yes, the Kinks catalog seems endless, quirky, and quite amazing.

Spot-on about the hototogisu. I've read the same elsewhere. I do particularly like this poem.