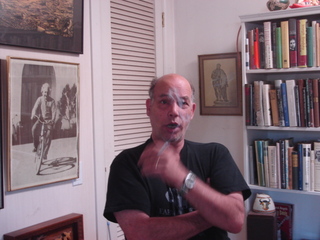 I'm sorry to report, another fine small press poet has died: Leonard J. Cirino.  Over the years, I've published a few pieces by Leonard in Lilliput Review.  He was unique; what appealed to me about his work was a lyrical quality that displayed a fine mix of detail and philosophy, with a faintly Eastern sensibility.  Indeed, he loved the classic Eastern poets, as in the following:

The Road Going Nowhere after So Chongju

The road going somewhere always leads to an end.
Sadness, like a red blossom, also comes to an end.
The limbs of a willow bend to the stream, the moon
descends. Sorrow, an ache laced with opium, and joy
that never ends. The floating worlds go on in a dream.
What of the taste and stiff scent of blood?
Its stain? The road long coming home?


The poet and friend of Leonard, RD Armstrong, has done a fine tribute over at the Lummox Writers' Press Club.  Check it out if you get a chance, it's a fine modern elegy.  In addition, listen to Leonard  being interviewed by RD over at Blog Talk Radio on The Jane Crown Show or via the following widget:


A couple of Leonard's poems, the first from his last book and the second, originally published in America back in 2007.

Judged harshly by my enemies, I say,
Let them cast the first stone. I’ll know
the last judgement when my time comes;
with the clouds and seas as my proper
form of worship, along with the streams,
mountains, the trees and stones.
I never had to stay in the dark of my room
or stand in a corner. Life never punished me
until madness ran amok with my body,
my brain. i could have been Frida
struck by a bus, or Deborah falling,
jumping from the stadium’s heights.
Let them cast lots among the shadows like ghosts.
I know my place in the dark and the light.

from Leonard's last book The Instrument of Others
Pygmy Forest Press

Accept the Gift A Letter to James Wright, Deceased


Like snow, the poem breaks into petals
and crystals, sharp things like stilettos.
It is just now April, or mid-May,
the shadows of flowers lie neglected
in the garden while cedar and fir hang
lovely in the long-gone frost of March.

Why does it take some happiness
and a loneliness one can only cry for
to make these poems? I’m sorry you had
the gift. It makes for a miserable life.

How Ohio lived in you, your verse freed
and standing on its own, like a colt,
or an orphan removed from the nest
only to have its illusions shattered
in the world wide enough that you can’t
know yourself, or any part but Ohio,
and all things west, north, south, the distance
from home one calls a map of the earth.


Leonard reading "I Dream Your Voice":

And these 3 are for Leonard.  I believe he would like them very much ... rest in peace.

The moon drops one or two feathers into the field.
The dark wheat listens.
Be still.
Now.
There they are, the moons young, trying
Their wings.
Between trees, a slender woman lifts up the lovely shadow
Of her face, and now she steps into the air, now she is gone
Wholly, into the air.
I stand alone by an elder tree, I do not dare breathe
Or move.
I listen.
The wheat leans back toward its own darkness,
And I lean toward mine.

You said goodbye at Yellow Crane Pavilion
and sailed west, down into the valley
through the flowers and the mist of spring
until your lonely sail vanished
in the blue sky's horizon.

and I was left watching the river
flowing gently into heaven

nightingale
you're growing old...
but what a voice!

Wednesday Haiku will return next week.

Oh, if only all poets had someone to do the same as this at their passing. Thanks for this.

Thank you Don. It's a fine thing you have done for Leonard, who seldom received any accolades for his work, even though he didn't write for recognition. He was always pointing that out, that he wrote for the sheer joy of writing. Still, I'm going on record here to say that Leonard deserves our admiration and applause.

nice job, don.
good words and he deserved them all.

His poetry is intense and beautiful.

I'm sad to hear this news. Leonard and I never met face to face, however we did correspond in the mail (paper mail) and later a little by e-mail. He published poems of mine a couple of times, in his magazine Semi-Dwarf Review and in a broadside series he did.

Thank you for this thoughtful and respectful tribute. I believe it would have pleased him. His recognition was so meager and his work so worthy.

Thank you for honoring Leonard in his own words. I appreciate this thoughtfol tribute to the man whose love and life I shared for ten years.

It seems like such a little thing to do - to remember - considering how much small press poets such as Leonard give the world.

Most certainly ... some fine, fine work by Leonard over the years.

Yes, Theresa, a great variety in what he did but the voice was always distinctly his.

You are welcome. So many folks have recounted similar stories about corresponding over the years, never meeting ... this world of small press poets, so sad and so beautiful.

I am so very sorry for your loss. Leonard was so generous with his time and work - he commented on things and didn't send form letters it was so very obvious that it was all about the work and not about publication.

And, oh, the wonderful poems.

Thanks ... yes, indeed, let us cherish the words, keep him in memory and miss him, too.

For all those interested to know more about Leonard and read a very personal tribute to him, this Litterata blog post by Maureen Hurley.

Don, I consider your tribute so true and heartfelt, providing Leonard's readers like me, from afar, to connect with his hour of passing, and affording an opportunity to place "red petals" (made of words) upon his place of rest, wherever that may be, either urn or grave.

Knowing Leo via frequent email & several books he kindly "snail-mailed" as a gift, I choose to consider him "just asleep," as Bob Dylan did "Joey...the King of the streets" -- for both Leo & I agree that even death has an end. Thank you.

Thanks very much for your note ... even death has an end - yes, so much truth in the sparrow's song, and yours ...