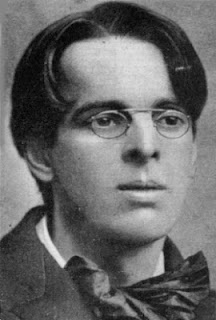 Until just a few days ago, I was unaware of this recording by Joni Mitchell of William Butler Yeats' monumental modern poem, "The Second Coming." And, now that I am, I'm not really sure what to think.

Ms. Mitchell is well known for a wide strain of crankiness - ask those who have attended her concerts (she walked off at Live Aid in Giant Stadium in 1986 to the bemusement of myself and 55,000 other attendees), ask Bob Dylan, ask record executives, ask the Woodstock Generation, ask Madonna (and Grace Slick and the estate of Janis Joplin) ... well, you get the idea.

Still an artist is an artist and, though I'm not real sure that this recording is anything if not her opinion of where we are now (ok, W.B.'s opinion, too, of where we were then), it is arguably one which happens to be at least in part true (as with some of the above - eh, Woodstock generation?).

What is beyond doubt is she has given us some of the truly great music over the last handful of decades. Here is a 30 minute concert from 1970 which shows the range of her talent early in her career:


In closing, I suppose it might simply be best to let Mr. Yeats speak for himself, and all of us, in what is, if not the greatest, one of the greatest poems of the 20th century:

Turning and turning in the widening gyre
The falcon cannot hear the falconer;
Things fall apart; the centre cannot hold;
Mere anarchy is loosed upon the world,
The blood-dimmed tide is loosed, and everywhere
The ceremony of innocence is drowned;
The best lack all conviction, while the worst
Are full of passionate intensity.

Surely some revelation is at hand;
Surely the Second Coming is at hand.
The Second Coming! Hardly are those words out
When a vast image out of Spiritus Mundi
Troubles my sight: somewhere in sands of the desert
A shape with lion body and the head of a man,
A gaze blank and pitiless as the sun,
Is moving its slow thighs, while all about it
Reel shadows of the indignant desert birds.
The darkness drops again; but now I know
That twenty centuries of stony sleep
Were vexed to nightmare by a rocking cradle,
And what rough beast, its hour come round at last,
Slouches towards Bethlehem to be born?

well, well
coming home in the rain...
god of the poor *

* Note by David Lanoue: Issa, who was poor, fancies that the "poverty god" (bimbô-gami) was his special tutelary deity. Like the poet, this god can't seem to catch a break. According to Shinto belief, in Tenth Month all of Japan's gods vacate their shrines to congregate at the Izumo-Taisha Shrine. The god of the poor trudges home in the rain.

Outstanding post, today. Yeats poem is so powerful, not a word wasted...and Issa is wonderful. The god of poverty is new to me, thank you for the information, too. Always good stuff! Thank you...

Truly monumental, although the crack about "mere anarchy" always stuck in my craw. & it's worth saying that his wife Georgie channeled the "unknown instructors" he credits for all his best visionary stuff (including this one). Anyhow, thanks for nudging my mind towards Yeats (& Joni & Bimbo-Gami) this fine Sunday.

A ... so glad you liked it ... and the god of poverty was new to me to, though I've skirted his environs many a year. Don

I think the 'mere anarchy' was a tad hyperbolic.

Of course, he could have gone for humor, as in this ...

this coupling.... pure magic &
wasn't it Yeats who said:

yes it was.... they are both entirely "in it"
for the music, words, poetry

nice to revisit her Chelsea Morning & the others.

"and he played real good for free"

" he had never been on tv
so they passed his music by."

(I bet that she is speaking of James Taylor and that it is Chelsea (maybe the Embankment) in London, say 1968 or so ?

Thanks for a couple of more notes to the tune to give us a broader view of The Song. Of course, I always thought of Chelsea as Manhattan so this is a different take, indeed.

I think that you are right..... Chelsea New York City.
( I googled the song.... and I hope that the Feds aren't tracking my searches and emails about all of this.... & other "stuff" !)

my "take" on the song just coincidence that I was in London and staying on a boat on the Chelsea Embankment when she was playing in London.

Thanks for the note - perhaps this is what you (and the Feds) found when you googled ... a quote from Ms. Mitchell:

"In a 1996 interview with the Los Angeles Times, Mitchell explained: "I wrote that in Philadelphia after some girls who worked in this club where I was playing found all this colored slag glass in an alley. We collected a lot of it and built these glass mobiles with copper wire and coat hangers. I took mine back to New York and put them in my window on West 16th Street in the Chelsea District. The sun would hit the mobile and send these moving colors all around the room. As a young girl, I found that to be a thing of beauty. There's even a reference to the mobile in the song. It was a very young and lovely time... before I had a record deal. I think it's a very sweet song, but I don't think of it as part of my best work. To me, most of those early songs seem like the work of an ingenue." (from Songfacts)

didn't get as far as you did in what I was via GOOGLE reading.... more meanings in my mind via (coincidental) intertextualities..... as those
pieces of
glass
also
what WCW saw and wrote down-about in the courtyard of that hospital....

Be secret and exult
because of all things known
that is most difficult.