Robert Bly's Silence in the Snowy Fields and More 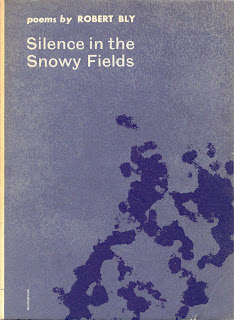 The book by Robert Bly chosen for the Near Perfect Book of Poetry list is Silence in the Snowy Fields. The book was written largely at the same time and in the same location as much of The Branch Will Not Break by James Wright. In fact, Bly is the friend referred to in The Blessing, which was featured in last Thursday's post.

As you know if you are a regular around here, the Near Perfect list is reader nominated and remains an ongoing project. As such, I don't necessarily have to agree with the choices; this is a communal thing. I hope to be featuring a poem or three from each of the nominated books by way of sharing the work valued by regular readers of poetry.

Which brings us back to Silence in the Snowy Fields. I'm a fan of Robert Bly, I think he has written more than his share of very good poems and has done more promoting the art of poetry than many of our laureates ever have. That being said, I've read Silence through twice over the past couple of months and, well, it didn't really grab me in a big way. So, this is by way of saying I'm not the final arbiter in this. I featured one poem from Silence back in July. Here are two more that stood out for me:

How strange to think of giving up all ambition!
Suddenly I see with such clear eyes
The white flake of snow
That has just fallen in the horse's mane!

Where We Must Look For Help

The dove returns: it found no resting place:
It was in flight all night above the shaken seas;
Beneath ark eaves
The dove shall magnify the tiger's bed;
Give the dove peace.
The split-tail swallows leave the sill at dawn;
At dusk, blue swallows shall return.
On the third day the crow shall fly;
The crow, the crow, the spider-colored crow,
The crow shall find new mud to walk upon.

The horses on Bly's farm played a large part in American poetry it would seem. The second poem feels pretty average until you hit the last two lines; suddenly the language rises to the image, transmutes to archetypal myth, and we are forced to see the cliche of a familiar story in a very different way.

Silence was Bly's first book and it is considered groundbreaking for its time, clearing out some of the cobwebs of what had been for many years a fairly staid American poetry scene. I'll be sharing one more poem from Silence in the coming days. For a very sizable preview of Silence in the Snowy Fields, check it out in google books.

This week's featured back issue of Lilliput Review is #60, a little different in layout and approach. It even comes with a title: "Poems Without Segues II." The whole idea was a matter of expediency; I had more poems on hand than I could, at that time, deal with, and so threw nuance to the wind and simply printed them. #60 was originally published in August 1994. 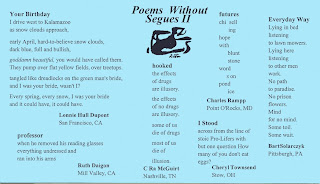 Since the scan actually includes 6 poems from the cover (click on the image above for a readable version), I'll be featuring more poems than usual. What follows are some selections from the other 7 jam-packed pages.

waves break
on the cusp
of our bed--
I cradle
her moans,
moonlit
between my
crescent thighs

I think the rain
is falling
on my mother's
grave I think
it falls
very quietly.
I think there
is a tree there
and it catches
the drops
and sifts them
down
silently.


There is me
and this tree
and that bird

and there is morning.
Suzanne Bowers


Self Aggrandizing Poet
The head of the dead window box
flower bows away from
the grimy window in
the town with
your name.

And a Brobdingnag poem from Huff:

This is how Hopper would have painted it:
the line of yellow dryers
catching the sunlight from the broad window.
Man with his hand reached up to the coin slot,
head turned to the side as though reflecting,
woman bent over the wide table
intent on sorting,
another standing hands at her side, looking off -
as though visiting another country;
each thing as it is,
not reaching beyond the scene for his symbols,
saying merely, "On such and such a day,
it was just as I show you."
Each person, each object, static
but the light a pilgrim.

I've read with interest the running commentary on Wright's "The Branch . . .", and now a bit of Robert Bly.

I think I mentioned this once before, but I have a photocopy of Bly's University of Iowa master's thesis, "Steps Towards Poetry and Death", submitted to Paul Engle in 1956. I don't think it can be checked out any longer; in fact, I believe I was the last person to check it out of the library on December 26, 1996. I'm glad I thought to make a copy. It is now in the Rare Books room. The manuscript has pencil markings, a few typos, etc. Very interesting. The only poem to make it to the "Silence In The Snowy Fields" collection is "Where We Must Look For Help", which you have kindly posted for readers. The rest of the manuscript is very unBly-like and was obviously a very early attempt. "Silence In The Snowy Fields" was first published in 1962. I think Bly was more influenced by Wright than the other way around, as Wright was much more extensively published than Bly at the time they worked together on the Minnesota farmstead. But Wright's "The Branch . . ." was a marked departure from his earlier work, so there must have been a symbiotic writing relationship of some sort that summer. Perhaps similar to the Yeats-Pound relationship at Stone Cottage?

For some reason, I have always preferred Bly over Wright, but this must be entirely subjective. Some poets speak more deeply to certain readers than others, for reasons difficult to pinpoint. There's an odd abstraction in Bly which I find appealing, though that is often exactly what turns many readers off. It perhaps is no accident that one of Bly's early mentors was Wallace Stevens, another poet of immense abstractions I've always been enamored of as well.

Please excuse the long comment! But I do find this particular subject extremely interesting. Thanks Don!!!

Robert Bly was a friend of my teacher, Rudd Fleming

in period between 1963-1967
one day, as I frequently did, I "popped in" on Rudd
AND there visiting (giving a reading of his newest book that evening -U of Md.) was Robert Bly!

he and Rudd "turned me on" to Neruda and Lorca!

Carlo was (also) there... and is yet around here.

Ed, that must have been an interesting meeting with RB.

I met him once at a reading, on March 12th, 2002. He was breathing then, and I believe still is although he must be in his eighties.

I was fortunate enough to have a rather long visit with him, very memorable. He is very tall. I bought a copy of his translations of the interesting Norwegian poet Olav Hauge, "Trusting Your Life To Water and Eternity". Hauge died a few years ago and was a most interesting poet, living his entire life on a one-acre apple farm in Norway and marrying for the first time in his seventies. I remember Robert insisted on giving the book to me, but I insisted on paying and I ended up the winner of that small battle. I also brought along a copy of "Old Man Rubbing His Eyes", which was an earlier small-press version (Ally Press) of "This Tree Will Be Here For 1000 Years". Bly often did initial smaller-scale publications of his collections to benefit small presses before a larger scale publication appeared later. My copy was signed by Franz Richter, who illustrated the Ally Press version of the book, and whom I used to see occasionally, though not recently. Franz is of the lovingly crazy artist variety, from Minneapolis. So I was able to have the book signed by Bly as well and now particularly cherish the volume. Robert Bly told me a number of amusing anecdotes concerning Franz Richter and the publication of "Old Man Rubbing His Eyes". Also he was sincerely touched, I could tell, by my bringing it along. I think it reminded him of some good old memories.

Thanks for including the scan of the poems. I enjoyed all of the poems in this post...have reread them numerous times.

I'm on my third reading of Huff's book. I just can't seem to put it down.

I dig Suzanne Bower's poem that you've included here. Thanks for posting it. Happy New Year to you!

Jeffrey, thanks for all the background and insights. I saw Bly once do an incredible reading with the Paul Winter Consort, at one of the very first Geraldine Dodge Poetry Festivals, back in the mid-80's. Quite excellent.

I think I understand your preference for Bly over Wright, though I am the opposite. They are very different and I do like them very much. Bly seems to get at the big picture through perception of the general state of things (even when dealing with detail) whereas with Wright the door of the personal is his access to the universal.

Thanks, too, Ed, for the link and connections.

Craig and Lisa, Huff and Suzie were such good friends, it's nice to see them complimented side by side. Glad you enjoyed the work.