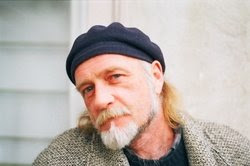 Opening the envelope containing the October 2008 Barbaric Yawp, I first took a look at its newsletter, "From the Marrow," and my eyes lit upon the phrase "the late Dave Church" as a contributor to Free Verse. I was shocked and needed confirmation. Before looking for the editor's phone number, I first checked out the bio notes in the Yawp and saw an editorial insertion in Dave's bio note, saying he'd died of a heart attack on Thanksgiving Day. Then I checked the last letter he'd written me, and saw that it's dated November 17, 2008--ten days before Thanksgiving. ... (for the rest of the post, follow here - & scroll down a bit, it's there)

In closing his tribute, George quotes one of Dave's poems to be published in a forthcoming Barbaric Yawp. He says of the poem:

This brief lyric speaks for no school, except maybe the ancient one of Basho, whose classical simplicity it recalls.

As many of you know, I've spent a lot of time reflecting on the work of Basho at this blog over the last year and, I have to say, I couldn't agree with George's assessment more. Here's the poem: