I'm in love with Gerald Stern. It is unabashed, it is obsessive, it is irresponsible, and it is nigh on devotional, this love for Gerald Stern.

It all started a couple of years back when I ran across a couple of poems in the much maligned anthology, Good Poems, edited by Garrison Keillor. Keillor was attacked, pilloried, really, by no less a poet, one whom I greatly admire, than August Kleinazhler. He has since been defended
by another poetic luminary, Dana Gioia, which ended up creating the proverbial poetic tempest in a teapot that ended up in a vaguely clicheish flurry of exchanges. Points were scored on both sides and, god forbid, people were talking about poetry in a semi-heated fashion.

Little of this mattered to me. I enjoyed Keillor's anthology very much, but more importantly I'd fallen in love; and though the white hot passion I had for 6 months or so has cooled a bit, still, my devotion is true. Which leads to the recent publication of Stern's new Quarternote Chapbook, The Preacher.

I am at a loss to describe my love. Stern, on the surface, appears staid enough, surely nothing unsafe here. Yet he plays like a wild-haired, poetic clarinetist, suddenly deviating seriously from the charts. The metaphors, the allusions, the connections are sparks flying from downed wires; careful there, isn't that water, rushing nearby?

The Preacher takes its title and begins as a rift on the narrator from the opening lines of Ecclesiastes in the King James version of Bible (yup, the version is important; not only which one, but which particular King James version). Or perhaps it actually began with listening to another riff, this one by one of the very few people I'll let preach to me: Charles Mingus.

Or maybe it all really began with the poet executing one of his signature moves, well-known to devotees, lovers and acolytes alike: hugging a tree. Though you might not end up rich if you got a dime for every time Stern alludes to this most lyrical of occupations, you still could get yourself a cup a joe, possibly even at one of the upscale clip joints passing for coffeehouses these days.

What's it about, you say? Who cares, says I, it's by the loved one. It's about everything. We dip our big toe in Dante's (or was that Milton's) fine Lake in Hell (Cocytus 32-4), discover many lamentable holes, very black, indeed, throughout the miserable existence of our heroic human race. Truman, Sharon, and Genghis Kahn (typo, variant spelling, or just plain sic?) all get their fiery comuppance, with Kant, Leonard Cohen and Lord Mingus all strolling in and out for perspective and three-part harmony.

The whole is structured on a poetic riff of a conversation with fellow versifier Peter Richards; this conversation is spoken, however, in the language of Tongues, one long familiar to the Preacher, Mr. Stern, and the composer of that famed autobiography, Beneath the Underdog.

All in all, the dialogue is free associative, manically passionate and, probably, in the key of B flat. As is well known, my attention tends to wander after 10 lines or so, but Stern's standard 30 to 50 or so line work usually keeps me riveted. This 23 page, book-length poem might have been expected to tax that haiku-like attention span yet it kept me in my seat and brought me back for more (after reading a library copy twice through, I bought my own copy).

By way of disclosure, Mr. Stern started life in Pittsburgh, where I've ended up. He's hit many of the world's high spots in his journey, notably NYC, Jersey and Philadelphia, all places I touched base with in the beginnings of my journey. So, there is a corruption of place, a sort of geography of influence in this post I felt I had to confess, along with my above heralded love. I've never met Mr. Stern, am not shilling for any one particular agenda or another except the reader's agenda, specifically this reader's agenda: mine. If you are unfamiliar with his work, if you like things a tad untidy, if you sing off key or, perhaps, don't mind doing the dishes in the morning, get a hold of a copy of Leaving Another Kingdom: the Selected Poems. 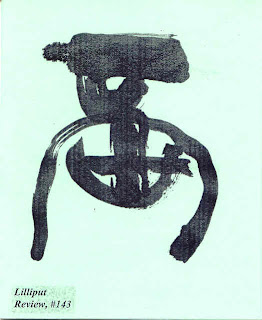 
Robins’s nest in the tangle

have been pierced by the barbs

that kept out the wolves

I lean on the balcony rails

and breathe in the sun-spliced

winds of the west.

A cross glimmers on the front-range

mountains, blends with the light

of the sun. Hidden in the drain

trill to my steam heavy thoughts.

This morning, I try to bend

two waves of light into one.

Though I am departing for Mt. Inaba

I will return home at once,

-if I hear your voice

in the sigh of the wind

my daughter and I

Till next time, Don

Sold to the woman in black, on faith in your word alone. Tell it, Mr. W, tell it!

The selected poems is definitely the way to go to start out ... I'd be curious to see how he grabs you ...