Brautigan Drives on Deep
into Psyche 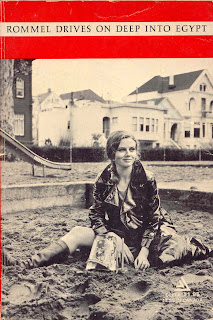 I was all set to put up a post about Gerald Stern (it would begin “I’m in love with Gerald Stern”) when, thanks to The Writer’s Almanac, I realized yesterday was the anniversary of Richard Brautigan’s birth.

I can’t think of anything more momentous for the small press than Richard Brautigan’s birth. In fact, I can’t think of anything more lyrically momentous than Richard Brautigan’s birth when it comes to the legacy of that flower generation. You know who you are out there: bankers, lawyers, cheats, lovers, cowards, colleagues, lechers, thieves, poets, screamers, corpses, parents, betrayers. There was a moment in your lives, all your lives, when, briefly, in your field of vision, in the middle distance, everything coalesced; it all made perfect sense, there, there it is: and like a wisp of scent, it wafted off.

Richard Brautigan, gone. What he left behind has been praised, ridiculed, despised, laughed at, admired, wept over, and, most tragically, forgotten. Among others, he was the reason that an entire generation of men let down their guard. What a thought! How many took up the pen when they realized they could say, with varying degrees of proficiency, what they felt rather than what they knew. Imagine that!

So, I scurried off to my bookshelf to leaf through my collection of Brautigan poesy for something momentous to post and, lo and behold, it’s almost nowhere to be found. Just two copies of Rommel Drives on Deep into Egypt and a copy of Loading Mercury with a Pitchfork. This is what happens when you decide to patch some plaster and the next thing you know, you are painting two rooms and moving everything around, including the floor to ceiling books that were stuffed into said rooms. In a panic, I head off on the net only to discover, at brautigan.net, that his poetry collections, annotated at that, are all up and online. The presentation isn’t very appealing but it is what it is: the work. I highly recommend you knock yourself out. For some it will be nostalgia, for others, truth.

I believe, for me, the word is love.

Well, I can hardly continue without at least one Brautigan gem, to entice you toward the others. From Rommel …

Feasting and Drinking Went on Far into the Night

Feasting and drinking went on far into the night

but in the end we went home alone to console ourselves

which seems to be what so many things are all about

like the branches of a tree just after the wind

This week’s featured back issue of Lilliput Review is #142, published in January 2005: 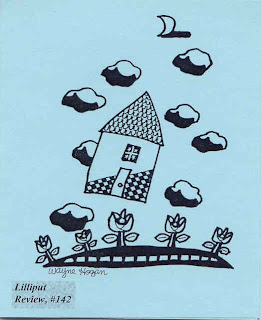 No one wanted my life

and I returned the favor.

Dunce cap with a razor crease

Thin plastic on the outside,

but the cone recedes

to infinity. Perhaps there is

a tree of knowledge. You

fronds, their dog, balm of gilead

stories unfold in the ferns

if you know how to find them

and pick with respect

you can live on what you hear

and never get full

I’d like to think that Richard would have liked these poems. Very much.

Don,
I had not heard of Richard Brautigan (Gasp!) so I thank you for including a link to his work. I loved the seed packet poems.
Also, your featured Lilliput Review #142--I LOVE the cover by Wayne Hogan. I also loved Carl Mayfield's poem "The Pacifist" and wonder what he meant by saying "so I returned the favor." Always a pleasure to stop in.

Very happy I was able to point you in the direction of Brautigan. His very early fiction is very disarming; Troutfishing in America is a classic. I'm not sure if In Watermelon Sugar is, indeed, too sweet for today's tastes. His later fiction took a darker turn, but he did some sendups of traditional genre forms.

I may be wrong, but I think Carl Mayfield's line is literal, with a touch of irony. Perhaps he is suggesting that the first person speaker would return aggressiveness differently, but I don't think so - that's the ironic part. His acknowledgment that no one wished to take his life is a favor to him is the literal part.

From the other side of the fence . . . a Brautigan lifer! Thank you for remembering. I have all the novels in my collection, having found the last one, "Sombrero Fallout", two years ago in an Iowa City, Iowa used book shop. My only two poetry collections are "Springhill" and "Rommel" so I appreciated the link to the earlier collections, long out of print. Really long. In the posthumous novel "An Unfortunate Woman", Thomas McGuane and Jim Harrison both have wonderful back page blurbs concerning Brautigan, the point being that I don't necessarily think that Brautigan has been "forgotten". The outdoor essayist/fly fishing author John Geirach refers to Brautigan often in his writings and thinks "Trout Fishing In America" our country's greatest twentieth-century novel. But I wonder if younger generation readers will pick him up; perhaps not. If anyone knows of any good biographies of Brautigan, whether in-print or online, I would very much appreciated knowing of them. Biographical studies of Brautigan are scarce so far as I know. Thank you very much and Best Regards!

Thanks very much for the kind note and posting. Your friend's experience just underlines the huge sadness of Brautigan. That thread of sadness, the crushed romantic, was always there, particularly in the poetry. I know there are some of the beat kids from gen ex that caught on to him, but I'm not so sure about the folks coming up now. And that's a shame because he is much more tuned to gen next; ideals and ideas seem to skip generations (children sloughing off parents' values) and I've much more hope for the coming years. Though the political is only a mirror, I think we'll see something reflected there.

No bios that I know of short of two memoirs:

Downstream from Trout Fishing in America by Keith Abbott and You Can't Catch Death: a Daughter's Memoir by Ianthe Brautigan.

This reply will be cross-posted at the blog ...

We Stopped at Perfect Days
We stopped at perfect days
and got out of the car.
The wind glanced at her hair.
It was as simple as that.
I turned to say something

If you never wrote another word, those first few paragraphs would be enough to demonstrate your writing chops. Am smiling, broadly.

Thanks. Sharpening the chops for our other blog debut ...