That Smirking Face, Cassadaga, and f/k/a 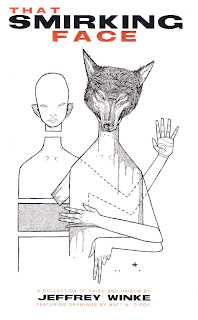 With That Smirking Face, Jeffrey Winke and Matt Ciprov have put together a fascinating collaboration of word and image. An 8 page broadside (one piece of heavy grey stock 11 x 17” paper, folded twice and uncut), That Smirking Face is comprised of 13 haiku, 2 haibuns and four razor-sharp illustrations, the one reproduced above gracing the cover. In addition, Matt Cipov has also provided woodcut-like portraits of Jeffrey Winke and himself on the back cover. This is a high quality production, limited to 250 copies, issued by Distant Thunder Press of Milwaukee. Winke’s work is every bit as sharp and clean as Cipov’s lines, no mean feat in 3 lines or less. Here are a handful of examples:

storage shelf
a couple of suitcases
filled with darkness


a kicked can
cartwheels
into its echo

Since there are a limited number of these available and I felt this is the kind of work, both poetic and artistic, that would appeal to the Lilliput Review audience, I’ve acquired a few copies for distribution. They are available for $5. If you’d like one, send payment made out to “Don Wentworth.” If you’d prefer, copies are also available directly from Distant Thunder Press, 234 North Broadway, Unit 513, Milwaukee, WI 53202, <distant_thunder_press@gmail.com>. Also, it may be purchased directly from the author, with details at his website. You won't be disappointed; it is worth the effort.

On another, equally creative front, I believe I’ve recently run into the album of the year for 2007: Cassadaga by Bright Eyes. Admittedly a lean year in new music, especially for a “harmless old coot” (last week’s most memorable quote, from a younger work colleague in reference to yours truly) like myself, Cassadaga brings the literate while not sacrificing the excitement, danger, fun and angst that has defined rock since the first musical curled lip and knowing sneer. Here’s a taste, from the song "Four Winds":


“Your class, your caste, your country, sect, your name or your tribe
There’s people always dying trying to keep them alive
There’s bodies decomposing in containers tonight
In an abandoned building where
The squatters made a mural of a Mexican girl
With fifteen cans of spray paint and a chemical swirl
She’s standing in the ashes at the end of the world
Four winds blowing through her hair …

The Bible’s blind, the Torah’s deaf, the Koran’s mute
If you burn them all together you get close to the truth
Still they are pouring over Sanskrit on the Ivy League moons
While shadows lengthen the sun
Cast off the schools of meditation built to soften the times
And holds us at the center while the spiral unwinds
Its knocking over fences, crossing property lines
Four winds cry until it comes …


It will be no surprise for those familiar with modern lit that an even more direct allusion to W. B. Yeats follows in the next verse. And if you think there's no way these lyrics can be sung, especially melodically, think Dylan and think again. For those unfamiliar with the catalogue of Conor Oberst’s work, Cassadaga is an excellent point of entry. Give it a spin.

This past week saw another reprint of a haiku from Gary Hotham’s “Modest Proposal Chapbook” Missed Appointment in the blog f/k/a, self-described as the home of “breathless punditry and one breath poetry.” Check it out; the haiku are always high quality.

This week’s tour of back issues of Lilliput Review arrives at #138, from May 2004. The issue was dedicated to the memory of Cid Corman, who had recently passed away and was a friend of and generous contributor to Lillie. The pages of this issue were enhanced by the wonderful artistic work of the Swedish artist/poet Henry Denander. Here is an example from that issue: 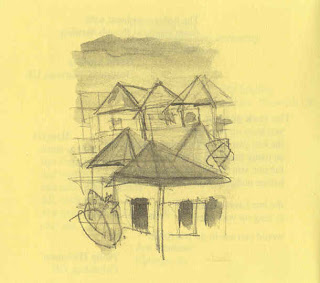 The cover of #138 was a poem by Cid, published in his memory, and the following samples from that issue will begin there. Once again in the middle of winter (January 2008) there is a longing for spring and David Lindley, of Heathcote, Warwick UK, does that so well in two poems here. Finally, Donny Smith’s homage to Lorca, with thoughts of something spring-like tucked in there somewhere.

Existence
All you have
and all you
have to give

The hedgerows burst with
green shoots as though deciding
against saintliness.


Lorca dream
The wind on the down of a young man’s
face, the sun on his torso, drops of sweat
sliding down into his waistband,
rain on a newly planted field, or a flock
of starlings circling to roost before a storm.
I woke and remembered only el rumor de los sexos.

The final note today is sad one, a personal one. Yesterday at work, we lost one of our long time colleagues to a year long battle with illness. She died much too young. Cathy Duhig was one of the most intelligent people I've ever met, no small feat in my profession. She was quick witted, lightning fast on the uptake, an excellent writer, acerbic, high strung and, at times, funny as hell. She had a near encyclopedic knowledge of women's issues and gave the IMDB a run for its money when it came to being a repository of little known facts about Hollywood films. Her passing is a great sadness. This posting is dedicated to her memory.

too soon, too soon,
too soon - new daffodils sway
in a chilly eastern breeze.

I would amend that moniker to "mostly harmless," given your gift for prompting both furtive tears and inappropriate laughter whenever I'm at the refdesk.

I am very sorry for the loss of your friend and colleague, Cathy Duhig. I also initially saw the offer for the outstanding broadside chapbook and wondered if you could let me know the official website of Distant Thunder Press--you can always just respond to my comment and I can check back to take a look. Thank Don!

PH: Thanks for the note. I haven't been able to find an official website for Distant Thunder Press, hence no link. However, the broadside may be purchased directly from the author. I've amended the post and placed his website in with the other order info. Thanks, too, for the kind words about the loss of Cathy Duhig. It is much appreciated (thanks, Leigh Anne, also for mentioning Cathy in Library Alchemy. As you would say, the funeral yesterday "was what it was": heartwrenching). Don

Don,
I am sorry you lost a friend. It is so not fair when people leave early. Please know that your essential gift of welcoming both the deep and profane in the form of short poems makes many ripples in this world we all share.

I really appreciate your kind words. Poetry has always been a way to turn things over, sometimes work them out; often, there is no working it out, just the awe that is life and this is how it is. Bad as well as good.