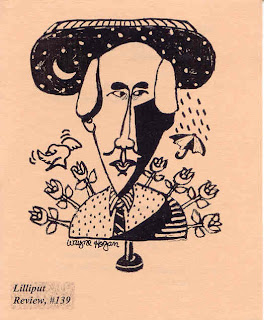 Cover by the Irrepressible Wayne Hogan

Though it might be heretical in the small press, I’m no fanboy of Charles Bukowski. The misogyny is near impossible to get by. Two things recently caused me to reconsider: a Jim Harrison review in the New York Times Book Review of the new career spanning publication, The Pleasures of the Damned: Poems, 1951-1993, and the film on Bukowski Born Into This, directed by John Dullaghan, using footage shot by Taylor Hackford. The film is a revelation and, as with much of his own works, is a warts and all affair. At one point, revisiting his childhood, Bukowski recounts the regular horrid beatings he endured at the hands of his father and this about said it all for me. No excuses: Buk would tolerate none and neither should we.

Bukowski’s virtues leap off the page: honesty, revelation, and an oft-concealed tenderness. He made the mold, broke it and everyone to follow in his footsteps pales in the brillant white California light. Still, there are as many troubling aspects in his work as there were many troubling issues in his life: really, how could one expect otherwise? Reading through this particular volume, edited by founding editor of Black Sparrow Press and friend, John Martin, can be at once rapid and a bit of a slog. What I mean by this is it can be read too quickly because of the natural cadence, read in almost novel-like or short story fashion. But, as with any great poet, that is a true injustice. The arrangement is not chronological so one is following the threads of association of editor Martin and that, in and of itself, is extremely interesting. It gives the reader more of a feel for the poet overall and is an excellent approach expertly handled.

Make no mistake: this is not everybody’s cup of meat. But poems like his “Carson McCullers” exactly capture what any of his legion fans knew all along; this man is a born poet, a reveler and directly in touch with what is.

all her books of
terrified loneliness

all her books about
the cruelty
of loveless love

were all that was left
of her

as the strolling vacationer
discovered her body

and she was quickly dispatched
to somewhere else
on the ship

as everything
continued just
as
she had written it.

There are many poems in this collection that it is hard for one to imagine would make a career retrospective but for every 10 of those there is one “Carson McCullers” and in a 500 plus page volume that makes for quite a few revelations. More than the average selected poems, I’d warrant. These revelations more often come in a bar, at the track, on the street, or sitting on the crapper but they are none the less powerful for it. For me, he will never replace Whitman or Ginsberg or Oliver or Sexton or Wordworth or Wright (James and Franz) but he doesn’t need to. He’s Bukowski and that’s enough.

This week’s selection from Lilliput Review comes from #139, originally published in October 2004. Here are some tinier revelations:

New fallen chestnuts
Always to bear the failure
of such beginnings.

one maple leads to another,
my father’s house,
two autumns from here

Child
you are just beginning
to learn the lessons
that finally
I have unlearned.


That’s it for this week. I'll end with one final quote from one small press poet to all the poor poet through all of time:

“all the poets wanted to get disability insurance
it was better than immortality.” - Charles Bukowski

That ending quote by Bukowski pretty much sums it up, doesn't it? Also, I found Bukowski simultaneously off-putting and engaging when I first read his works. I think that is what inspires so many people to follow his lead in their own writing.

Thanks for the note. Interesting thought, folks being inspired not necessarily in emulation of the work itself. I'm about 100 pages through the volume - reading three or 4 poems a day - and his honesty shines like a shadeless overhead bulb in a sad, shabby room.

The Carson McCullers piece says it all, Bukowski "humanifies."

l. Post Office (!)
2. Bring Me Your Love (illustrated by R. Crumb) (!)
3. Jay Doughherty interview of Bukowski in "Gargoyle #35"/l988
4. "Poetry"/Chicago waiting until Bukowski's death to publish their first of any of his poetry. Let my subscription lapse at that point.

Thank you for the interesting reference.

JLS: Thanks for the Buk pointers. Much appreciated. Don

I love this entry, Don. I just saw "Born to This" at the behest of a student whom I'd early turned onto Bukowski. Bukowski is one of the first poets I read and admired after purchasing LAST NIGHT OF THE EARTH POEMS sometime in the late eighties or early nineties at the now defunct Thackerays bookstore in Toledo Ohio. The documentary is good and it shows the damaged Bukowski that I "knew" from his poems. Watching him drink a bottle of beer was a revelation. I still laugh to myself when I think of it:

Bukowski drinks
a bottle of beer from
the bottom up

Theresa: Yes, powerful film, just grabs you - to overcome what he overcame is incredible, the damage itself so evident and yet he went on.

From the bottom up, indeed.

Glad you liked the post. Have you ever seen the Zippy strips that take Bukowski as an inspiration?

The first ever poem I ever read by Charles Bukowski was-

I reached out in to the top of the closet
and took out a pair of blue panties
and showed them to her and
asked "are these yours?"

And also reminds me of this