Basho: an "On The Road" Original 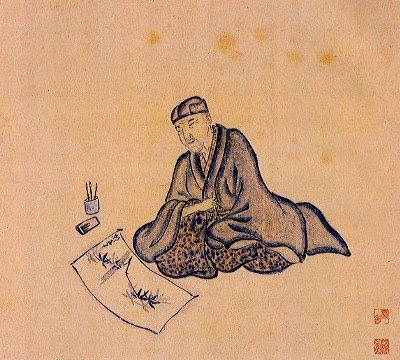 In preparation for a new project (& in a desperate attempt to flee the horrible poetry books I've encountered of late), I picked up The Essential Basho, translated by Sam Hamill, from my overburdened bookshelf.

What a revelation! And it ain't necessarily the poems.

I've never warmed up to Basho as I have the other big four classic haiku writers, such as Issa, and have often wondered why. Picking around that overburdened shelf, I found the following concerning the "big four" originals by another original, haiku guru R. H. Blyth:

Bashô is a religious man, Buson the artist, Issa the humanist. Bashô is concerned with God as he sees himself in the mind of the poet before flowers and fields. Buson deals with things as they exist by and for themselves, in their own right. Issa is concerned with man, man the weak angel; with birds and beasts as they struggle like us to make a living and keep their heads above water. If we do not begin with Bashô, our interpretation of haiku is bound to lack depth. The objectivity of Buson and the subjectivity of Issa both spring from the homely little man with long eyebrows and a bad digestion.


Fair enough, as seen through the lens of 's own lyrical propensity. He has left Shiki out of the discussion: he barely allowed him in to begin with, but that's for another time. I've yet to really connect with Basho's poems and this may begin to explain why. Don't get me wrong - there are some stunners:

Summer grasses:
all that remains of great soldiers'
imperial dreams.

Read this in light of, say, Isaiah's "All flesh is grass" and, for that matter basic physics and you get his drift. Religious and real: very powerful stuff, to paraphrase Master Elwood.

Still, there was a lot less of this and a lot of what to my crass western decidedly over-stimulated sensibilities was some fairly plain stuff. I read Hamill's translation of Narrow Road to the Interior and Travelogue of Weather-Beaten Bones and had enjoyed them and then I began The Knapsack Notebook and ran smack into this:

Within this temporal body composed of a hundred bones and nine holes there resides a spirit which, for lack of an adequate name, I think of as windblown. Like delicate drapery, it may be torn away and blown off by the least breeze. It brought me to writing poetry many years ago, initially for its own gratification, but eventually as a way of life. True, frustration and rejections were almost enough to bring this spirit to silence, and sometimes pride brought it to the brink of vanity. From the writing of the very first line, it has found no contentment as it was torn by one doubt after another. This windblown spirit considered the security of court life at one point; at another, it considered risking a display of its ignorance by becoming a scholar. But its passion for poetry would not permit either. Since it knows no other way than poetry, it has clung to it tenaciously.


My suggestion would be to use this paragraph in the prefatory material for the new Poet's Market as a guide to the "business" of poetry. This is how to get yourself published, friends.

For those who have been following the Near Perfect Books of Poetry list as it expands, all 127 listings have now been hypertexted to relevant material on the web, in most cases each entry has two links, one for poet and one for title. The links variously provide biographical material, sample poems, interviews, audio, video and all matter of related items. This is an open ended project, so if you have suggestions, send them along and I'll send you the two latest issues of Lilliput Review (or extend your subscription by 2 issues).

Lots of work, lots of fun.

Great passage! That definitely cuts right to the heart of the matter. I've never been as big a fan of Hamill as I am of some of the other translators, but I'll have to check this version out.

I've been less enamored of Basho as well. Not sure why. I think he doesn't have the playfullness of Issa.

Isn't this confession by Basho the most profound

Greg, I may be with you on the Hamill translation, though this passage is there. The Hamill happened to have all the books in one volume, which is why I reached for it first. I am definitely going to try out other translators for the poems. I have a Lucien Stryk edition that might be interesting. More on that later.

Charles, you are right, Issa has the playfulness down. I just feel maybe I'm not giving Basho his due, though if all he did was write the journals, he's got me there.

G, it really knocked me out, one of those moments when I'm sort of winging through a book and, smack, pay attention ...