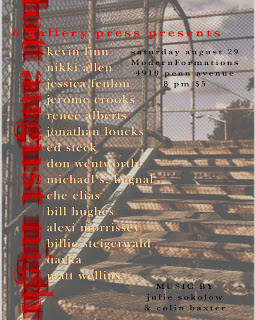 Last Saturday's reading at Modern Formations Gallery went well and any trepidation I had about reading for the first time in over 20 years rapidly evaporated as the poems took over. Because there were so many readers (14), we were limited to 8 minutes apiece, which made things even easier. I had decided early on that I would do a combination of poems from Lilliput, in recognition of this 20th anniversary year, with a few of my own to finish up. This is another instance that working in the short form really paid off.

I thought I'd share the Lilliput poems I read with you in today's post. Selecting the poems for reading really highlighted some differences between the long and short forms. Most poems of 10 lines or less really don't have public presentation as a primary goal; it's no stretch to say the short poem is generally not designed for public readings. There really isn't enough time to pick up a rhythm, get up some steam, and deliver the goods. The poem is over before you know it.

That doesn't mean that poets don't bring considerable talents in matters such as rhythm, meter, word sound, rhyme and more to the short poem to make them amenable to reading aloud. In fact, if a short poem doesn't bring some poetic device(s), it is in real danger of appearing to be an aphorism or even just a wise (or wise ass) remark. So, in going through the Lillie archives I went in search of certain types of short poems and, happily, found them in reasonable abundance. As a result, the poems I selected actually are not representative of the magazine as a whole, just a certain aspect of that magazine.

It didn't make much sense to get up and read work that wasn't designed in a way for reading and wouldn't connect in that type of setting. As a result, what follows was specifically chosen for the reading and, from the response, seemed to go over fairly well. It was a real challenge to present the work of other poets and to do the work justice.

springtime in a city park

look at them all
carrying weight and shoes
and pants,
briefcases and glasses.
a cigarette slowly lifted
to the lips.
sunlight on a youthful book
open.
hope.
look at them all
they're so fucking beautiful.

money says have a nice day

money says bark like a dog
and roll over

money says blame each other

money says have another biscuit

We have arrived without luggage
in a country we don't recognize
among people who distrust us
where the walls have no windows
and the doors open only
for the chosen. Welcome home.

Sometimes when eating an apple
I bite too far
and open the little room
the lovers have prepared,
and the seeds fall
onto the kitchen floor
and I see
they are tear-shaped.

Lost in the Translation

I'm impotent today she
said, closed the book
capped her pen. You can't
be impotent or potent, they
laughed. You have no penis.
She listened, and for a long
time, she believed them

annual politician of
a first book of
plums by ailing
writer under 40.
Marmosets may be
sulimated only
during February
and must be
accompanied by
a stamped, self
addressed moose

each piece a shining eye
examining
the rest of the explosion

Last night the past broke
and there was history
all over the cellar.
You should have seen it -
Rome was here, Greece was there,
Egypt floated near the ceiling -
finally I had to
call an historian:
and you know what they charge
for emergencies.

can take you
a long way

to find
this one.

I chose not to use any haiku per se for this particular reading simply because the ones I was considering didn't make the final cut, though I did feature a number among my own poems (since it is the form I most exclusively write in these days). There were a number of great readers that evening, particularly Renée Alberts, Nikki Allen, and Jerome Crooks. I felt very fortunate to be sharing the stage with so many talented artists.

I guess I'm good for another 20 years.

come again when you
have less time

nice selection from what seen from here in my cave that you read...

I could tell you a story about....that just happened yesterday
and now 45 years later a connection of it...

pin down that butterfly

Pinning down the butterfly
with words,letting
them go ...

Love the "Money says" and the "rip off" poems. I can see how those would be fun live.

Thanks for the vicarious taste of this event. I was proud to see you chose words from Texas poets Huff, Susie and Celeste.

Don, awhile back you posted about the breakneck pace you are living doin IUH online and all your other endeavors. I'm sure your loyal readers would understand if you took a week off. Please take care of yourself and refersh the well.

Thanks, Charles, those two poems in particular I was able to let go on ... the poets built them to be read (or shouted, even).

Thanks for the very kind words, Keddy. I just knew I was going to do Suzanne and Huff together, it made the reading personal, very special for me. You have officially read my mind over a long distance ... I've been thinking about a post free week here and there, especially after my goof up last week on the Ronald Baatz poems. Maybe next week, I'll have to see.

Wow. What a great collection of poems you read, Don. I read the first 2 and thought, "these will be my favorites," and then the next 2 were terrfic, and then the next, and the next. Each one a gem in its own right. It was obviously a good night to be an audience member. Thanks for sharing with us and congrats on "surviving" the reading. :-)

Thanks for including one of my poems Don. I appreciate it.

L.E., as always your compliments are very much appreciated. I have to thank all the poets who have contributed over the past 20 years for giving me such a rich and varied pot to select from.

Bart, I knew I was going to begin or end with "A Short Poem" - ending with it turned out to be the perfect way to finish. Without you and all your contributions, Lilliput wouldn't be what it is.

Your work means a lot.

sounds like a fun reading. i'm sure the audience loved the taste of Lilliput.