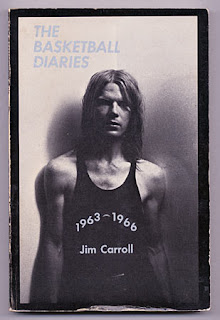 Sadly, today's edition of Issa's Sunday Service caps off a week of tribute posts for Jim Carroll. Happily, we still have his work, as long as we're alive, to turn to for solace, instruction, and enjoyment. This week's LitRock song is by the Jim Carroll Band: "Three Sisters:"

But she just wants to lay in bed all night
Reading Raymond Chandler.

I've been thinking about another of the song's featured on the blog this week, "It's Too Late." I remember Jim and the band appearing live on one of the nationally syndicated late night television shows, possibly Saturday Night Live, and performing it. He performed an alternative version of these opening lines:

It's probably hard to imagine today that the reference to Sharon Tate, one the victims slaughtered by the Manson family, was powerful and shocking, but, indeed, it was, particularly in a "pop" song, one being performed before millions of people on television. Here is the alternate opening as I remember it:

I say "as I remember it" because I can't find any reference to it anywhere. There are some live performance videos of the song from a show called Fridays, but it doesn't have the alternate reading. I wonder if anybody out there remembers that performance because those alternate lines about Reverend Moon dealt in poetic prophecy, not realized, and were every bit as shocking, if not more so, in the context of the place and time than the Tate lines.


last will and testament

make a wind chime
from my bones,

hang it
where the poets speak.

let me be a part
of the conversation,
life.

Charlie M sure can write down the bones

suddenly you brought back memories. "It's too late, to fall in love with Sharon Tate." I remember that song but I'd forgotten it was by Carroll. A friend of mine taped it for me years ago.

Ah, Ed ... I knew it would connect - Mr. Mehrhoff is special, indeed - and the Goldberg recommendation, have read and enjoyed "Writing Down the Bones", via the library have passed it on to scores of others ...

Charles, it's one of those degrees of separation things ... bingo.

PS One of these days I'll learn how to spell ...