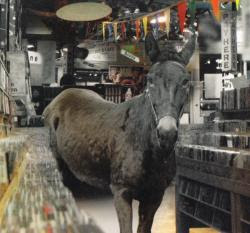 Week 62 (or 61 depending on you count them) and, looking back, it has amazed me that the overwhelming literary source for the high end material known as "litrock" has been the Bible.

Then again, maybe I shouldn't be so amazed. First and second generation blues musicians frequently talked about the relationship of gospel music and blues, juke joint Saturday nights and church singing Sunday mornings. Blues, of course, being the Devil's music and gospel, the Lord's.

This week's selection for Issa's Sunday Service is a song that is positively possessed, a song of the prophet who wrote the book full of hell fire and redemption, speaking in tongues and apocalyptic visions: "John the Revelator." There are a gazillion renditions of this number: rock, folk, blues, gospel, you name it. Since this feature is geared to rock, with the occasional detour, today's rendition is by one of only a handful of jam bands that are a blip on the ordinary music listeners radar: Gov't Mule (two others being the Grateful Dead and Phish).

While looking around for a decent version of "John The Revelator," I discovered that Nick Cave made it all his own, including some new lyrics. Maybe not my favorite, but certainly worth a listen for Cave fans and, the more I listen, the more possessed by it I seem.

Jack White of White Stripes, channeling early Black Sabbath, has also made this his own by writing an intro about war and devastation, the whole becoming the medley "Cannon/John The Revelator," here done live in France in 2007.

Of course, this is Son House's song, plain and simple, so I was hoping to find some video of hime performing it for full effect, but no luck. So, here's Son House's acapella version, with the complete lyrics:


Albert Huffstickler has been featured here many times and this week's poem adds to an impressive list of fine work: from Lilliput Review, #93, back in December 1997, a little waft of cool air in this abysmally hot weather, to tip us towards things to come:

summer moon--
in the vacant lot a ruckus
of voices

Huffstickler's autumn poem is vast in its brevity, sensibility, simplicity. A master, like Basho, Issa . . . Always do keep them coming, please.

Ooh that song is really, really good. Going back to play it again. thanks much for this one.

Nice combination of examples for that song. I'd never seen that particular WS performance or heard the Gov't Mule cover, so thank you.

Huff, a master, indeed ... thanks Donna.

Charles, glad that one hit the spot!

KD, funny this post sort of wrote itself - I was unaware of both the WS and Nick Cave covers and I'm a fan of both. You are welcome.

I was just listening to a mixed CD Tom Waits did for Mojo Magazine. Featured Son House's Revelator. I used to be really critical of White, because I felt he just ripped off House... until I saw It Might Get Loud.. then I changed my mind :) I was talking to a friend from Nashville who was saying what a fantastic influence he is on the whole town!

MLJ, thanks for the tip about "It Might Get Loud" ... I'm home, working like a dog on the mag backlog and it's available via Netflix instant watch, so I'm on it ...

Don't know much about White though I listen to his music and the various bands he's with - incredible sound, the real deal - Son House, of course, is the Deal.

I didn't want to watch It Might Get Loud because I can't stand U2. But really, it was well done and really made me fall in love with my guitars again. White lives in Nashville, and has his own label. He keeps things real, genuine and original. I didn't know a lot about him, I had always been a big friend of his friend Brendan Benson (who plays in the Ranconteurs). Speaking of which, one of my favorite albums "Lapalco" by Brendan Benson. If you can find a copy, check it out! different than White for sure, but crazy talented.

MLJ, thanks for the recommendation and the insight - finished watching It Might Get Loud and it was quite interesting - the part about Son House was a highlight and I came away with even more respect for White, he is a character in the old fashioned rock and roll sense - Jimmy Page telling the interviewer why he couldn't say how he creates was worth the price of admission.

Will check out Brendan Benson.

Haha I agree! I would love to spend the day going through Jimmy's study. So many records and books! White also did a black and white documentary on a tour where he played every major Canadian city in Canada.