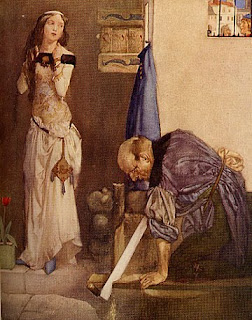 Illustration for "The Miller's Tale"

It's a summer song of pervasive dread, a wedding hymn riven with sexual anxiety, an epochal composition which routinely functions as background muzak for the keep-fit class (if you don't believe me, dig out Diana Moran's album Get Fit with the Green Goddess). Contradiction only bolsters the enigma of A Whiter Shade of Pale.

Mike Butler, from Lives of the Great Songs

As long-time time readers of The Hut know, I am a big fan of the art-rock band Procol Harum and so it is kind of surprising, at least to me, that it's taken this long to get to this hairy old chestnut (though they've appeared on The Jukebox twice before). Admittedly, for those who lived through those times, it was in many ways one of the most over-played songs on its initial release, rivaled in dread by some only slightly less than "MacArthur Park." To understand this dread (as opposed to the kind Mike Butler is talking about), one needs harken back to AM top 40 radio when number 1 singles were played at least once an hour. Ok, no more than once an hour, but it often seemed like much, much more.

The literary connection in this classic tune is the reference to "The Miller's Tale" from Geoffrey Chaucer's Canterbury Tales; at least that is the collective wisdom. One problem though: Keith Reid, the writer, denies it.

According to Reid, the reference to the Canterbury Tales is a red herring; pointedly, in an interview with Mike Butler linked above, he doesn't deny the reference is there. When asked why he put it in, he said "I can't remember now." Since the interview took place in 1994 and the song ostensibly recounts getting good and loaded, his answer seems hardly surprising, though there is no denying there may be a coyness there. In any case, for the purposes of Issa's Sunday Service, LitRock it is.

While doing a bit of background, I ran across versions of this song by Percy Sledge, whose tune "When a Man Loves a Woman" has been noted as a musical inspiration for "A Whiter Shade of Pale," Annie Lennox, a funky instrumental by King Curtis, and a surprisingly well-done vocal rendition by South Side Johnny and the Asbury Jukes.


This week's featured poem comes from the fine poet David Chorlton, who hails from Phoenix, Arizona. David's chapbook, Getting Across, is #5 in the "Modest Proposal Chapbook" series and was published back in 1997. Though 13 years ago, his lyric chronicle of the immigrant experience in the West is sadly as relevant today as it was back then. Here is a beautiful little poem of his from Lilliput Review, #97, in July 1998.


Playing Bach in the glass construction
sewn into an iron frame,
a flautist paces the traffic of the masses;
adagio, allegro, allegretto,
and every costume has a face
beneath the sparrow trapped inside


in and out
of prison they go...
baby sparrows

Don: While I do not share your taste for Procol Harum, that Central Station poem is a knockout.

Chorlton is also one of my favorites. I even tried to write "a Chorlton poem" and its posted here in the new issue of Fairfield University's online journal:
http://www.masonsroad.com/?page_id=696

The Chorlton is great. I love the fact with the Sunday posts if the music doesn't get 'em, the poetry might!

Thanks for pointing to your Chorlton poem, which I enjoyed.

when a mannnnn lovessss a woommmaannn
he can't think of nothing else (..)


just beyond "OHHHVHERRR THE MOUNTAIN
across the sea..."

my love waits for me

and just before "Oh my love, my darling, I hunger for your love..."

do you know who the very first rock n roll singer/star was?

you probably even had the Gene Autry record set

I do remember when "Whiter Shade" was a constant presence on top-40 radio (I would have been in junior high school when the song was recorded by Procol Harum), though I didn't especially think it was overplayed, as songs go -- no dread here on that score.

My clearest association of the song is with the movie New York Stories, the segment directed by Martin Scorcese, in which Nick Nolte plays a modern artists who flings globs of paint, in a somewhat Pollack-ish manner, at an enormous canvas, while playing the Procol Harum anthem at full blast on a tape player. (I always liked the Scorcese segment of the movie; kind of lukewarm to the Woody Allen segment; the Coppola segment put me to sleep.)

I don't have very distinct recollections of "MacArthur Park," though I knew someone back then who had a serious star crush on Richard Harris, and... well, I'll leave it at that.

A possible third candidate song to complete a mundane trinity might be "In-A-Gadda-Da-Vida." Radio stations would sometimes break the standard 3-minute rule, and play the full 7-minute (or whatever it was) version of the song. Now we're talking dread.

Though I will say, I broke up laughing at the rendering of the song, many years later, in a church scene on an episode of The Simpsons.

You got me going now - remember the "original mashup," when Flash Gordon meets a Western serial, in Gene Autry's "The Phantom Empire?"

I'd forgotten about the Simpsons bit on Iron Butterfly ("In the Garden of Eden, Baby") and, yes, it became one of the most dreaded of songs - I believe AM cut out the long drum solo. I sat next to a kid in high school (back row, natch) who incessantly did the entire solo, note for note, with two pencils on his desk.

I do believe I'd mercifully put "New York Stories" out of mind, but will go back and check out the Nolte/Pollack piece by Scorsese, which I, too, remember as being better than the others.

Ed, I think this one will interest you, too.

'Central Station'--- that is a beautiful little poem. Thanks for posting.

I always feel guilty putting the poems at the end on Sundays but folks most definitely have found this one.

The song is great =)