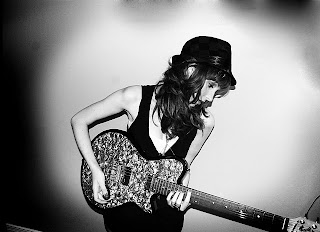 It's time for a first here at the Sunday Service: the featured song, "Literary Kings," is by an indie singer/songwriter.  Late July is the artist and she has new her EP, her first, entitled Side Swept.  If you've followed things around here lately, you probably recognize the name.  I've mentioned the website "Miss Late July" a couple of times regarding some excellent music (and musing) postings in recent weeks.  We connected over blues (MLJ thinks it might have been Sister Rosetta Tharpe) or Eastern poetry or philosophy (I was thinking Basho or Issa, but whadda I know).  Just yesterday she posted this powerful video of one of my all-time favorite bluesmen, Lightnin' Hopkins.

Obviously, I'm very glad we connected.  Her 5 song Side Swept EP is solid, indeed.  You can pre-listen to and download  the whole of Side Swept at the same place that you can make a donation if you do decide to download it.  It may also be purchased here.  I slapped dough on the virtual table and downloaded it and have been listening incessantly at home and on the mp3 player all week long. There's a real kinship between the small press and indie music.  Why not support a new artist like you'd support a new lit mag?  Still on the fence? Here's the video for "Literary Kings:"

Love the Kabuki-reminiscent death mask in the vid.  And the song with a literary title has a hook that just won't quit.

Thanks, MLJ, for representing when it comes to indies and for all the great music.  It'd be great for this song to start an indie trend here at The Hut.


Issue #99 from October 1998 provides today's feature poem, by the artist and poet John Harter.  John, who used eccentric spelling and typed everything in caps, died a few years back, highlighting another level of meaning in the following:

I TURN ON THE LIGHT AND LEAVE

Here's an extra poem from #99 for those of you who've been following for awhile, since John's poem already appeared here 3 years back.   This poem has the narrative quality and slightly surreal feel of many a fine poem by the excellent David Chorlton.  Enjoy.


The minute hand waves from the clock
to say I am only time, do not take me so seriously,
and the waiting passengers distract themselves
by reading.  Late again, how quickly
life goes past, they say to themselves
while they skim the news, page after terrible page.
Only when the first of them stands on his briefcase
to deliver a speech does the fine print fly
from the paper as a flock of doves, each
with an olive branch in its beak.

And, finally, because I seem to be thinking of dead friends quite a bit lately, here is Ringo, performing a song that now is forever linked with George, due to his lovely dedication at the concert for George.  Because of copyright restrictions on the concert, here is a different equally wonderful performance of "Photograph" from Ringo (check out the band).  Since I don't wish to forget what Ringo said and why I'm posting it, here's a photograph to look at: 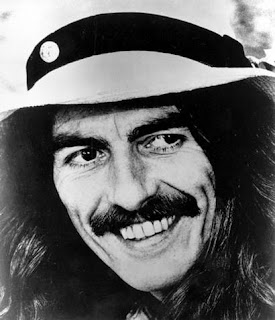 at the sound of the sunset
bell...
wildflowers

PS Following up on a recent Sunday Service that featured "A Whiter Shade of Pale," here's a Bill Griffith comic take on that song from his strip this week (click to enlarge)

"The groom was strumming harder
As th' earwig flew away ...
When we called out for a hyperlink
Th' ghost lost his toupee"

wow! thank you so much for the kind words. And to be mentioned in the same blog with one of my heros, George Harrison. Fantastic!! Much appreciated :)

so happens that just
yesterday
or was it the day before

I "checked" out her/their web-site... what a pleasant discovery for me..

and the drummer is very very ....smooth...neat where neatness counts.

Thanks Don & Ed. It's just 5 tracks. I'm just heading out the door to head to the studio to start recording the next batch of 5! so this post is of great encouragement!

Ed, we are on the same wavelength ... glad you checked it out. Follow the link and listen to the other 4 songs.

"we was blown out"

I very much like her/their A Well Kept Secret..

I also appreciate "hearing" a young Carol King fingering-piano keys) and a young Rickie Lee Jones(phrasing-vocals).... as though one person was "doing"

she is not exactly like either sort-of, well, purer?

You are introducing me to some pretty good music I would never have listened to on my own.

Yup, Ed, I do believe she cuts right through with a very nice jangly rock/pop/lit (sense &) sensibility that's got some harkening back to rock's good ol' roots in folk, hey, friend?

I don't know if I would have found LMJ on my musical journey, so thanks for the intro.
She's smooth. Brings to mind some back in the day sounds. Definitely a nice addition to my downloads.
Seems the Untidy Hut brings me many pleasant Sundays.Good stuff.

Jeannie, glad to hear you liked her work. A little bit of the old school in their, and also right now ...

I think I am again in
the
wrong box

however:
that don't stop a
Rolling stone

check THIS out Petty and Dylan/Zimmerman doing "it" (maybe you can figure out how to get the film to play...I can't):

WOW, MAn I got tears in my olde eyes... all three of them.

version has been "yanked" due to copyright stuff..

somebody is always
yanking somebody