Louis Jenkins: Before You Know It 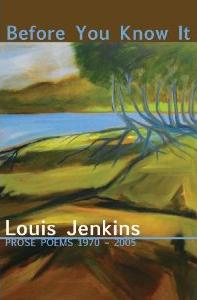 Prose poetry is an anomaly to the casual reader.  What exactly makes it a poem or, more precisely, what exactly is a prose poem?  There are no quick or easy definitions.  I think of prose poetry as supercharged language, as hyperkinetic and compressed in both image, idea, and execution.

Then again, that might be the definition of any good poem.  In any case, the work of Louis Jenkins meets all the above criteria and more.

My introduction to Jenkins came via a poetry friend and subscriber to Lilliput Review, who queried me one day if I would be interested in reading a volume of prose poems, one of her favorites, entitled Before You Know It: Selected Poems 1970-2005 by the poet Louis Jenkins.  She even offered to send me her personalized copy and so I took her up on it.

Louis Jenkins is a marvel of a prose poet, dealing exclusively in that form.   He has been featured any number of times on The Writer's Almanac with fine work, including "The Couple" and "The Speaker."  The site, Your Daily Poem, has also highlighted his work from Before You Know It, including "Driftwood."

Jenkins is at once imaginative, dark, humorous, and mysterious, as well as being always inventive.  On the surface, his style has a linear bent, which masks a cyclical intent.   At its very best, his work has a certain uncanny quality, a probing at essence, too often missing in poetry.  If there is a prose analog to his work it might be found in the magnificent fiction of Steven Millhauser, one of the few postmodern fiction writers I can get on board with precisely because of an attention to detail and loving description, to say nothing of a pervasive lyrical tone, akin to the poems of Louis Jenkins.


By dusk the snow is already partially melted. There
are dark patches where the  grass  shows  through,
like islands in the sea seen from an airplane. Which
one is  home?   The one I left as a child?   They all
seem the same now. What became of my parents?
What about  all those  things I  started  and  never
finished?   What were they?   As we get older we
become more alone.   The man and his wife share
this gift.   It is  their breakfast:   coffee and silence,
morning sunlight.   They make love or they quarrel.
They  move  through  the  day,   she on  the  black
squares, he on the white. At night they sit by fire, he
reading his book, she knitting.   The fire is agitated.
The wind hoots in the chimney like a child blowing
in a bottle, happily.

in this old photo
see me standing in the shadow
of my father
ash, he casts no shadow now
and I struggle for light


Child
Child
you are just beginning
to learn the lessons
that finally
I have unlearned.

parentless
I only have my shadow...
autumn dusk

I've always enjoyed Jenkins' prose poems. Perhaps it is that many have the feel of Lake Superior country.

Here is a link to his prose poem entitled "Prose Poem"

You hit on something I sort of had a sense of in Jenkins' work - a sense of place, and that seems so odd to say in a poet of his nature. But there it is.

Really enjoyed the link you sent along. All of us who aspire to be poets are experts at the art of hitting the wastebasket at 20 feet -

Practice, indeed ... once again he slyly slips the point under the door.

I will look for this. I do enjoy prose poetry quite a lot and try to write it myself quite often.

Charles ... Glad these hit the spot. He really writes so well in the prose poem form.

I've never heard of Jenkins but my curiosity is aroused. I like the poems you shared a lot. I also love prose poems and have been writing quite a few of late. (The last year I've been doing mostly haibun). Lately I have been exploring some darker, more surreal territory. I want to write a novel in verse (using a series of short prose poems). You are so right, though, about the difficulty of categorizing such works. I recently sent some of my prose poems from the novel in verse out and one editor said he liked them but he called them "speculative fiction." The thing is, I am excited about these so-called hybrid forms. It's a happy coincidence that you touch on prose poems in your entry, and I enjoyed it and feel strengthened in my resolve now to finish my prose poem project. But then I get something every time I come here. It's such a great blog. Thank you.

My take is possibly cliché-ish, but I've always thought of "The Great Gatsby" as poetry. Screw the categories - write the word.

It is interesting that you've moved from haibun to prose poem - a definite relationship there. It is the homing in on the supercharged, intensified moment.

As Joseph Campbell said, you seem to be following your bliss. That's what is about.

Give it your all. I know it will be great.

Via email, David Giannini points toward a new publication, "The Prose Poem Project":

Here's a link to a new publisher of both online and paper books and anthologies:

Thanks so much for your comments. I will check out the link to the Prose Poem project. I have a Kindle and last night I downloaded the book _American Prose Poems_. It has Jenkins in it and quite a few others I've never seen before. In the intro, the editor tells about the year that Mark Strand's book of prose poetry was up for a Pulitzer. Two members voted yes; the other was adamant in voting no. In the end, Strand did not win. It surprises me a bit when artists hold so tightly to categories; aren't we supposed to experiment, to synthesize? Can't tell you how glad I was to see your entry on the Prose Poem. Working with haibun the last year has done wonders for my sense of control over a single moment. I was anxious to see if the intro to _American Prose Poems_ would mention haibun (it doesn't). But there is a poem in the collection that takes "Haibun" as its title.

Great link, Don! Can't wait to explore more of The Prose Poem project. Thanks so much.

You are welcome, thanks from both of us goes out to David Giannini really.

I have always been a great lover of the prose poems of James Wright. If you haven't seen those, you should definitely check them out. I wonder, are they any by him the anthology you downloaded?

And who wrote the one entitled Haibun?

Yes, there are a couple of prose poems by Wright in the collection: "On Having My Pocket Picked in Rome" and "Honey." The one titled "Haibun 6" is by John Ashbery.

Thanks, Theresa. The pick pocket poem is a good one. Does the formatting look ok in the Kindle version of Great American Prose Poems?

Theresa
how's winter been in Bradner?

Thanks for the note, particularly about Boxing Inside the Box, which I was unaware of.

Yes, the format is fine. I have several books of poetry on my Kindle. The only problems I've had is with some of the "free" books. The poems aren't always formatted correctly in those. But all others are fine. I really like my Kindle!

Just got a Kobo and wondering about the general e-reader experience with poetry. Glad you like the Kindle, I'm enjoying this reader, too.

Tom, thanks for those prose poem recommendations. I'm going to actively seek some of those out. I have some Oliver, but had never even heard of Edson until recently. I just ordered his collected poems a few days ago. I have lots of Bly but I don't think any of the collections have prose poems, though I really need to look again to be sure. The others you mention are also new to me. Tom, it has been very cold in Bradner. We heat with wood and thought we had plenty but ended up using it all and having to buy more. I'll be so happy for spring.

Theresa: Just found out that White Pine has done a collection of Bly's prose poems, just out:

Thanks, Don, I'm going to check that out!

BTW, got a new collection in the mail today called MODELS OF THE UNIVERSE, a collection of prose poems edited by Stuart Friebert and David Young. I opened the book to a random page, a prose poem by Tomas Transtromer called "At Funchal" and these lines really struck me:

After dusk we go out. The dark powerful paw of the cape lies thrown out into the sea.

Thanks for the note on the new prose poem book. Transtromer is amazing - interestingly, he is someone Bly translated a full volume of.

Don, just a follow up to our conversation. Thanks to you and David for turning me on to The Prose Poem Project. They accepted parts 1-8 of my long prose poem I've been working on. Excited!

Absolutely wonderful way for this conversation to resonate ... congrats, Theresa.