Leonard Cohen recorded a gorgeous homage to Federico Garcia Lorca entitled "Take This Waltz," the lyrics of which are an English version of Garcia Lorca's poem "Pequeño vals vienés," and which is today's featured song on Issa's Sunday Service.  According to the website, Poetry Connection, in"1986 Leonard Cohen's English translation of the poem "Pequeño vals vienés" by Lorca reached #1 in the Spanish single charts."

The mystery of Garcia Lorca's death has never been solved - whether his killing was purely political or whether it was personal or some combination of both - though just two years ago, the story was back in the news when an unsuccessful attempt was made to find his grave.  In a previous edition of the Sunday Service, The Pogues sang of Garcia Lorca's horrific end in the song "Lorca's Novena," and posited that, before his killers were able to return and mutilate his body as planned, he simply got up and walked away.

So, Garcia Lorca walks on these many years later.  If you would find him, look in the lines of his poetry.

If you would find him, look in your heart.

Here are two fine brief examples of his exquisite work.


My shadow glides in silence
over the watercourse.

On account of my shadow
the frogs are deprived of stars.

The shadow sends my body
reflections of quiet things.

A hundred crickets are trying
to gild the glow of the reeds.

A glow arises in my breast,
the one mirrored in the water.


I know that my profile will be serene
in the north of an unreflecting sky.
Mercury of vigil, chaste mirror
to break the pulse of my style.

For if ivy and the cool of linen
are the norm of the body I leave behind,
my profile in the sand will be the old
unblushing silence of a crocodile.

And though my tongue of frozen doves
will never taste of flame,
only of empty broom,

I'll be a free sign of oppressed norms
on the neck of the stiff branch
and in an ache of dahlias without end.

And here is the version of the poem recorded by Cohen:

There's a concert hall in Vienna
Where your mouth had a thousand reviews
There's a bar where the boys have stopped talking
They've been sentenced to death by the blues
But who is it climbs to your picture
With a garland of freshly cut tears?

And I'll dance with you in Vienna
I'll be wearing a river's disguise
The hyacinth wild on my shoulder
My mouth on the dew of your thighs
And I'll bury my soul in a scrapbook
With the photographs there, and the moss

And I'll yield to the flood of your beauty
My cheap violin and my cross
And you'll carry me down on your dancing
To the pools that you lift on your wrist
Oh my love, oh my love
Take this waltz, take this waltz
It's yours now, it's all that there is

And, finally, a fine live rendition of the song: 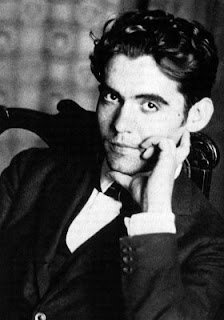 a new year--
the same nonsense
piled on nonsense


PS  Get 2 free issues     Get 2 more free issues     Lillie poem archive
Send a single haiku for the Wednesday Haiku feature.  Here's how.
Go to the LitRock web site for a list of all 90 songs

my daughter's flamenco troupe is performing their Lorca piece end of this month..

they are doing the entire piece... about 50 mins.. I've seen it a cpl of times..
it is a Lorca piece the poem about a bull-fighter ..

VERY EXCITING performance
just as, for me Lorca's work is EXCITING


I was escorted off of a train in Spain in 1968 for openly reading Lorca's Poet In New York that
Ben Belitt translation.


think I'll re-read it today. Poet in New York one of the very few books I've ever marked up / written notes in...

especially marked-up: The King of Harlem

"seek out the great sun of the center"

" and assuredly dance out the dance
while the flower-stems stiffen
and murder our Moses - almost into bulrushes' heaven."

not sure what "it" means, nor does it/did it matter...

I inhaled these rhythms imitated them (for a moment) & then moved on...

now,
back to re:read your post
&
pay attention to't.

(I forget which Island) which was not too far from Rhodes soooo he came over to Rhodes to Lindos where I was living spent a cpl days there (Jack Gilbert was also there) so we-all "hung out" for a bit.
Pretty sure that he came to Lindos to visit with Jack as, he sure as hell didn't come to see me... besides, I was more interested in Pauline/Fay then him...or Jack.
as I recall he was with a cute blond girl I don't remember her name. Leonard sang some songs at various places in Lindos that later became in SONGS OF A ROOM
(just went to my stash of records/albums/cds to see which album because I didn't recall it s title &


Cohen is "something else again" picture/photo of him on the c-d eating a banana.... I betchuh he got it offn Basho's Banana Tree!

Here is something re: that Lorca piece that Furia Flamenca does this performance was at The Kennedy Center:

second page photo one-up from the bottom
the VERY CUTE red-head on the lft... that's my daughter..

I taught her how to dance !

Thanks for the notes. Glad, as always, to see a connection - the Lorca, your daughter in the Lorca piece, Cohen and Greece and Gilbert.

It all dovetails, known and unknown.

Don't know if you've seen this piece, but, since its you and me today, it deals with Cohen in Greece in the 60s.

And here's a few more details:

will forward this the pauline/Fay she was there in Lindos too...
and
that IS Leonard as I recall him boy, were we skinny...and "cool" He owned that house on Hydra?

I almost took out a 99 year lease on the house that we were renting for as I recall for $30 per month.

that guitar that you see in the photo... at the table I betcha it was the same one that he brought with him over to Lindos.

YOU KNOW WHO ELSE besides me and Jack Gilbert, and Pauline, and Willard & Mavis Manus was there waiting things out in The Dodecanese Islands ?
Robert Lax!

CHECK OUT WILLARD MANUS' book about much of this that wentr on in Lindos..

I think the book is called Dancing on the Tables.

I reconnected with Willard a year or so ago he is now living in LA writing plays!

Lorca's poetry has been deeply important to me since early in my poet life. His poems have an impeccable geometry -- the only thing similar I've found are some of the poems I've read (in translation) by Hafiz (or Hafez) and a few of the Arabic poets of southern Spain in the middle ages (whose work Lorca read much in translation, the Arabic Andalusian work at least). I've learned much by making attempts at translating Lorca now and then over the years.

I'm curious, who did the translations you've given here of "Debussy" and "Sonnet"?


the poems done in Picasso's hand and the drawings

the poems translated by Trueblood....

just as you "cut your teeth" on Lorca / Lorca cut his on Gongora.

Gongora was a contemporary of El Greco

(one of these days I'll read this Gongora-Picasso-Trueblood book

far beyond Russell's fine intro and deep into the
story

pee est:
seems to me though I haven't looked at amazon for this book that amazon has been raising their prices for "real" books and pushing at a high price things delivered via something called a "kindle"

all of the kids are doing it ... and crashing and wrecking their brains while their computers are writing their papers.... automatically.

I haven't been able to attribute the Garcia Lorca translations, though they seem to be everywhere on the net. I will dig around in my Lorca books on hand and see if I can up with it.

As always, the big picture is in the smallest details. Thanks for the (con)text and tip.

I find everything cheaper on abebooks than amazon ... usually.

Perhaps these Gongoras are reprints - pretty reasonable prices if this is the one you are talking about.

NO. That's not it.... My edition must be to original

the edition that I have is hard-back and a red-cloth hardback with the front of cover wrap a Picasso image side facial of a girl/woman with beyond-the-shoulder length black hair...and on the back cover-wrap in Picasso's hand/brush "gongora"

just before the first poem (which is in Picasso's hand , then Trueblood's translation..

the editions that you found just might have inside e the entirety of what I have but at a smaller size.

so, My guess is that that I have is a first edition. AND, dig this it looks brand new!

lots more info on bottom of this page:

the Original in spanish version published in Paris, 1948 here will copy out all as it is very (to me) interestingly important:

The publisher is grateful to Maya Picasso-Widmaier for permission to use copy no. 227 of GONGORA for reproduction.

so: Picasso's daughter had Picasso's copy of this book and gave it over to George Baraziller to make the book! (I guess) a facsimile of Picasso's original with the Spanish (Gongora) translated by Trueblood

,that's getting pretty damn close to the source!


"Library of Congress Cataloging in Publication Data"
has

neither kindle nor amazon nor any computer or hand-hel electronic pad can replicate either one of these REAL books..

might as well take these devices an ..."shove 'em"!

except I have the (original) cover-wrap...

and more about the Picasso/Gongora ..... book.

maybe Lyle can translate this article - when he has less time?

apologies for taking up so much time with this....
however

time has of yet & has NEVER stopped me from;

Had a feeling it was a reprint of the first you have ... facsimile no doubt doesn't do justice to the original - for those counting the pennies it is an option.

Thanks for all the detail, Ed - as I'm sure you know, I love it.

I'm late reading this on Google Reader, but really appreciated the Leonard Cohen links supplied in the Comments. I first heard of Leonard Cohen in 1968 as a freshwoman student st SUNY Plattsburgh (very near Montreal) when the college had a showing of the 1965 film, Ladies and Gentleman, Mr. Leonard Cohen. From then on, I've worn out his records and discs, etc. In fact for the rest of that academic year, I couldn't sleep at night if I didn't play his first record as a my personal lulluby suite. Take This Waltz is one of his works of art I could drive everyone in hearing distance crazy with, playing it over and over. Ay, ay, ay, ay!

Thanx also, Don - for your comment on my blog about being an artist -- but really, only in retirement have I really hit my stride. Guess retirement is the big crack I needed (I don't have to pass for normal anymore!), and lots of light is coming in, to put a LC spin on it.

Good job, Don - I continue to be amazed at all that you do!

So great to hear (and feel) those words - "lots of light is coming in" - the pure unadulterated joy and wonder of the artist.

What you are doing is what we all dream retirement will be and so many of us never achieve.

I just saw this entry today. Thanks for featuring my little ditty.

You are very welcome. Your poem is one of my very favorite from Lilliput ...