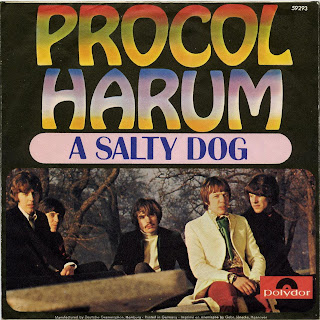 I hardly need an excuse to feature a song by Procol Harum; they've already made the list here and here  and here, to say nothing about this non-Sunday Service rant   (in fact, there is even a post that compares Shelley's "Ozymandias" and Keith Reid "Conquistador", dating way back to the old Lilliput blog, "Beneath Cherry Blossoms") Since it's Gary Brooks birthday today, May 29th, we'll call it excuse du jour, needed or no, and make it a fourth (or fifth) appearance.

"Pilgrim's Progress" is the last song on the seminal A Salty Dog album, a summing up of went on before.  The litrock connection is to John Bunyan's book of the same, being a title shout-out and all.   It continues the loose nautical theme that permeates the album, dealing with anchors, explorers, pirates, and all.  The last 3 lines are not as honest as it gets with rock but, in my opinion, with literature.

We are all taking turns passing it on ...


This week's poem comes from Lilliput Review #90, from which only one poem over the years has been featured on this blog.  It would seem that, perhaps, #90 wasn't quite the issue I thought it to be at the time I laid it out back in July 1997.  I could be wrong.  Like a poet's poem, once you let something go it's out there; the same is true for an editor and her/his work.  Here's one, however, I find particularly relevant.  Enjoy.

The poems are sad and short:
love half-remembered,
history--beautiful, closed and Greek.
But what I like best
is the blank three-quarters page,
white as a statue's marble eyes- -

a space to write or cry.

PS Really happy I got through the whole post and didn't mention the other thing.


PPS  Get 2 free issues    Get 2 more free issues     Lillie poem archive
Send a single haiku for the Wednesday Haiku feature.  Here's how.
Go to the LitRock web site for a list of all 104 songs

Indeed, Charles, it was number 63 on the Sunday Service.