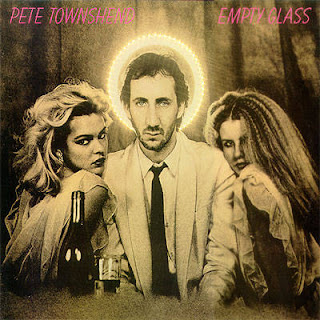 Note: Due to a blogger two day glitch & an overlapping five day trip to the woods, there was no Sunday service last week, breaking a string of 102 weeks in a row.  About f'ing time, I'd say.  Here's what was slated then.  Now if I could only replicate for you what I was doing a week ago today.

May 20th was Pete Townshend's birthday so I thought this week I'd feature one of my fav songs of his, "Jools and Jim," from his sensational solo album, Empty Glass.

First off, this song just plain rocks out.  I'm not one for playing songs over and over, unless trying to catch an obscure lyric (still another thing eliminated by the majestic ubiquity that is the net), but this song I've played many a time, over and over and over ...

As to what's going on in the song, well, the title characters, it seems, were two rock critics who decided to trash Keith Moon after his death and Townshend took exception.

"They don't give a shit that Keith Moon's dead?
"Is that exactly what I thought I read?"

Lines sung with such venom that the intended targets were probably very glad not to be in the same room when they were sung.

But let's go back to the beginning.  Empty Glass is named after the idea that, via mediation or similar practice, one empties oneself (the vessel) to prepare to be filled with the now, the is, enlightenment, godstuff, etc..  Townshend was very much into Eastern philosophy around this time (and may still be) and it certainly comes out any number of times on this album.  This song references Krishna, as well as Christ, which is how it gets its lit cred.

"And when I did my first solo album, I called it 'Empty Glass', 'cause of this idea that when you go to the tavern -- which is to God, you know -- and you ask for His love -- He's the bartender, you know -- and He gives you a drink, and what you have to give Him is an empty glass. You know there's no point giving Him your heart if it's full already; there's no point going to God if your heart's full of Doris."

In this light, the first stanza of the song is interesting, indeed.  But what about all the rage throughout?

Well, yes, there is that, and that is after all the point.  What is brilliant is Townshend's use of the musical bridge lyrically, admitting his own hypocrisy, saying if we looked eye to eye it might all be different, reaching out a hand to "you, you two ... ."

In that room, when the song was sung ...

He brings home the lesson as he moves from the bridge and points the two callous critics to the way, asking if they understand the teachings of Krishna and Christ, and, if so, what after all are you (they) on about?  Then back to that first, very interesting verse.

Make of it what you will - for rock, I believe it is brilliant, indeed.  Plus the fact that it contains his best line ever

"Your hearts are melting in pools of gin"

But did you read the stuff that Julie said?
Or little Jimmy with his hair dyed red?
They don't give a shit Keith Moon is dead
Is that exactly what I thought I read?

Anyone can buy some leather
Ain't no better than wearing sheep
anyone can sell lucky heather
You can see that words are cheap!

But did you read the stuff that Julie said?
Or little Jimmy with his hair dyed red?
They have a standard of perfection there
That you and me can never share

But I know for sure that if we met up eye to eye
A little wine would bring us closer, you and I
'Cos your right, hypocrisy will be the death of me
And theirs an I before e when your spelling ecstasy
And you, you two......

Did you hear the stuff that Krishna said?
Or know for you that Jesus' blood was shed?
Is it in your heart or in your head?
Or does the truth lie in the center spread?

I've got my thoughts about that most enigmatic of enigmatic last lines but it's only conjecture.  I'll share it if you really want to hear.

The albums most well-known song, "Rough Boys," is also a flat out rocker, as can be heard, if not seen, on the video for the song:

Of course, anyone alive way back when will ask: any connection between the song "Jools & Jim" and the famous Francois Traffaut film "Jules et Jim" and my answer would have to be I don't have a clue.  But just in case anybody comes up with a connection here's the opening sequence with subtitles:


This week's poem comes from Lilliput Review, #93, a little poem I've always loved, maybe because I'm a fan of this and this.  Come to think of it, maybe that's why I got into this.


how it is done
the vanishing,
to step behind an atom
the oak crown still roaring

the peaks of clouds
behind one blade of grass
vanish

PS Really happy I got through the whole post and didn't mention the other thing.


PPS  Get 2 free issues    Get 2 more free issues     Lillie poem archive
Send a single haiku for the Wednesday Haiku feature.  Here's how.
Go to the LitRock web site for a list of all 103 songs


Subscribe to Lilliput Review
Posted by Issa's Untidy Hut at 7:45 AM

could it also be that via this 'typewriter tappers' he has taken this far beyond the merely and into what has thenasnow be;come the state of Poetry / co-munication agai ... allso ?where "everyone does(has) crash and(or) jump(ped)"

for that gin an ancient Chinese saying :"a little wine makes wise men of us all"

"far beyond the merely and into what has thenasnow be;come the state of Poetry" ...

Though much broader, a more than fair reading, Kokkie-san.

I always liked the literalness of the gin line, as opposed to the metaphoric.

Little is the key to wisdom, eh?

Wow, a couple of lovely ladies in that image, but that guy in the middle. You know why guys get into rock and roll now. :)

That "Wondering" poem by Georgette Perry is really something! Unforgettable.

I'd like to hear your theory about the "enigmatic last line". I've got one of my own...

JBF ... I was wondering if one of those hotel rooms Keith notoriously trashed wasn't in Oklahoma.

I've always loved the reference to "Is It In My Head" from Quadrophenia.

Ah, thanks for that, Gilbert. I think you nailed it. Don