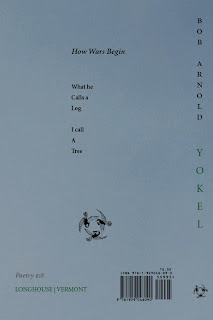 John Martone is one of my favorite contemporary poets of the short form, so when he offered a review of Bob Arnold's new book, Yokel - A Long Green Mountain Poem, I was happy to accept.   It is with great pleasure that I turn the critical reins over to John, particularly since I've published and always enjoy reading Arnold's work.  John's opinions, of course, are his own.

And let me hasten to add they are opinions I respect mightily.

Yokel: n. A country bumpkin; a naïve or gullible rustic:  “These conspirators were not all the unlettered yokels which some historians would have them to be” (E.P. Thompson). Perhaps from English dialectical yokel, green woodpecker (probably imitative of its note).

Arnold would appreciate the irony of our ‘American’ dictionary citing The Rise of the English Working Class to describe what his backwoods folks are not. His Long Green Mountain Poem is a study in human ecology, and both the people and crises he shows us have now-obscure roots, of course, in the world of Thompson’s masterwork. Our poet has tilted word’s meaning though, for our Yokel is poet-conspirator and participant-observer, a green woodpecker hammering away at the insects in a tall tree. Someone we hear.

Native, the otherwise nameless protagonists who populate Arnold’s world, is the voiceless 21st century back country dweller, male or female, who inhabits (often but not exclusively) trailer, drives either a derelict junker, spiffy new Dodge trucks, or ancient tractor towing hay wagons now laden with defunct computers and other appliances to  pastureland dump. Native is poor; and the intrusion of manufactured trash in all its forms renders the poverty of his rural world even starker. In Back Road Archaeology, the male of the species cooks the family breakfast of pancakes then—

Tosse[s] the paper plate onto a year’s
Worth of paper plates on the back porch,
Each licked clean by his dogs.

In Native Never Made It, we read how he “got in/ With a wrong bunch”:

Both character and place have been poisoned by a virulent culture. Exotic/non-native industrial species are a threatening presence, turning up throughout the collection. A one-time Farmer now installs wood-pellet stoves that he doesn’t quite understand.  He drives “A beautiful pickup truck with the fanciest side mirrors/ on both doors. It seemed like 3D. Elsewhere, powerful men consider poisoning an old mill with toxic waste in order to preserve it from developers.

Poisoned and expropriated, Arnold’s Vermont is a third-world country. His Pastures of Plenty are reduced to a junkyard, or worse:

If it’s not a junkyard—then it will be real estate.
If it’s real estate—it will be a few new
Houses built lopsided on turgid ground
…ruined
By oil spills, junk metal and pallets of old
Batteries…

Arnold watches. As we know from such earlier books as On Stone, in which he records the subtleties of building a stone playhouse for his son Carson, he is nothing if not careful. (If you ever have the privilege of visiting his home, you will find the 10,000 books of his store and every tool in his workshop each in its place, ready to hand in the flash of an eye.) His craft, his design, is unobtrusive –no showy  bricoleur, but every element counts. Arnold’s informal pentameter, for example, argues with Frost, much as that poet argued with Emerson before him. We don’t have Frost’s family tragedies any longer, because the family has been eviscerated. What we see instead is the erasure of a world, in the trailers that replace wooden houses (only to be abandoned in turn as in Gone), in chance self-sufficiency so often overwhelmed by the presumptions of new-comer wealth. It would probably be stretching things to say that the class divide is as stark as one would see in the Dominican Republic, say, or to call this cultural genocide, but the continuum is pretty clear.

The poet lives in his world, though, and that life always feels stronger than the dangers that imperil it. We see this in two poems for his son Carson, reflecting that meticulous care mentioned above—

The Worst Thing About a Young Son

Your orderly
Toolbox will never
Be the same


One of the Best Things about a Young Son

There are poems of profound affection for Susan (a longer collection – 30-plus years! is forthcoming) a magnificent poem for Richard Levasseur, and elegies for others who live again.  And there is the affirmation with which this Green Mountain poem ends, in which Arnold, like Thoreau of The Maine Woods, improves our ignorance: 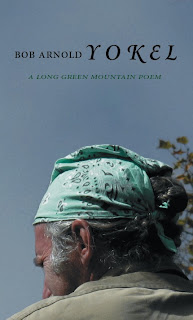 
Issue #155 of Lilliput Review was jam packed with a fine collection of short work.  You can find 5 fine examples in this past post.   And here's one more, from March 2007, to give you pause:

Don't talk to me
about enlightenment.


nightingale --
even his shit
gets wrapped in paper.

PS  Get 2 free issues    Get 2 more free issues     Lillie poem archive
Send a single haiku for the Wednesday Haiku feature.  Here's how.
Go to the LitRock web site for a list of all 102 songs
Subscribe to Lilliput Review

NEATLY DONE ..... true 'craftsmen' all around

I so enjoyed seeing that Bob Arnold's newest poetry book had been reviewed, and by john martone, and so delighted in reading this review that I wrote one too! Over at word pond — http://bit.ly/jqkXR5 . Arnold's great work demands reviews of equal value. Thanks.

Nice, Donna - I passed along your review via FB ...