Reactions to Watts on Writing: a Reader Generated Post 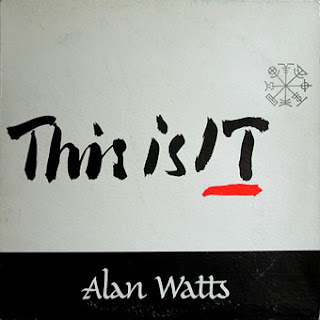 I'd like to begin this post with a big thanks to all who regularly read and to those who contribute via the comments and emails. I think what follows will speak to how fine those contributions are.

In a recent post, I quoted Alan Watts on advice to writers, with a tip o' the hat to Neil Gaiman. Reader reaction to the post was every bit as interesting as the quote itself, setting off a cascade of reaction that expanded and clarified some thought.

I also received a question from San Francisco via Scotland (thanks, Rita!) as to whether Watts really said this at all. As I've not been able to independently verify, I've sent a query off to Mr. Gaiman. We'll see.

If anyone else can confirm or refute, that would be just great.

Always so much harder to prove something didn't happen than it did, said the librarian to the world.

Ed pointed to Natalie Goldberg's Writing Down the Bones as another essential source of writing wisdom/inspiration. Here is a set of quotes from Goldberg on GoodReads that speak to the point.

Bukowski explained the phrase in a 1963 letter to John William Corrington: "Somebody at one of these places [...] asked me: 'What do you do? How do you write, create?' You don't, I told them. You don't try. That's very important: 'not' to try, either for Cadillacs, creation or immortality. You wait, and if nothing happens, you wait some more. It's like a bug high on the wall. You wait for it to come to you. When it gets close enough you reach out, slap and kill it. Or if you like its looks you make a pet out of it."

Donna sent along this wonder full lecture of Watts on Haiku:

And Pat remembers a great poem by Gary Snyder:

How Poetry Comes to Me

It comes blundering over the
Boulders at night, it stays
Frightened outside the
Range of my campfire
I go to meet it at the
Edge of the light

Lyle has both a favorite Watts quote and a great Bukowski ancedote, the latter in reaction to Aditya's comment:

One of my favorite Alan Watts quotes, a very brief one, is a quick moment from an interview with Robert Wilson, given at the front of an edition of Zen and the Beat Way. The snippet of dialogue goes as follows:

Robert Wilson: What is Zen?

Robert Wilson: Would you care to enlarge on that?

The item in one of the other comments here about Charles Bukowski ("Don't try") brought to mind another Bukowski moment, of sorts -- in The Poet Exposed (a book of photographs of poets by Chris Felver, who has photographed quite a few), the page for Charles Bukowski has no photo of Bukowski, only a photo reproduction of a short handwritten note that reads "No visitors," with Bukowski's signature at the bottom.

Finally, Merrill's deep reaction to Watts' "bird flying over us" provoked this reaction from me:

vain mankind--
idling away this night
of winter moon

The lecture on haiku is incredible. Thanks so much for posting this.

that there is a chapter/section in D.T. Suzuki's
Zen and Japanese Culture

ps.. don't correct spelling of "which" which jus might be a 'minimalist' ;concrete' abstract haiku ?

Thanks for the excellent alternative view to Watts on haiku ... fine work.

Thanks ... I think it's pretty good myself.

Yes, D. T. Suzuki has an extensive section on haiku (51 pages!) in his book *Zen and Japanese Culture*. It was first published in 1959, so Alan Watts's essay on haiku came out first (first broadcast on KPFA in Berkeley in 1958), but it wouldn't surprise me if they had been talking with each other about haiku (they did know each other). Suzuki, of course, is buried in Kamakura next to R. H. Blyth, and the two were good friends. You can feel the influence of Blyth in Suzuki's coverage of haiku -- a text that probably deserves more recognition than it has generally received for its influence on the birth of haiku in English. Indeed, after Blyth's four-volume *Haiku* set (1949-1952), the years 1957-1959 were watershed years for haiku proselytization, with Alan Watts's "Haiku" essay (and broadcast on KPFA), Harold Henderson's *An Introduction to Haiku* (1958), Kenneth Yasuda's *The Japanese Haiku* (1957), and the prominent growth of Beat poet interest in haiku. The highly influential Peter Pauper Press books of haiku translations also started appearing around 1958. At this time, haiku was heavily in the "Zen" camp (thanks chiefly, I think, to Blyth and Suzuki), a distortion from which English-language haiku is still recovering.

Hi, Don. At end of day today I found a response from Michael Dylan Welch on word pond's September 26, 2011 posting of the Alan Watts lecture on haiku with my own extrapolations added to the tea, with a link to his strenuous annotated response to this very same Watts lecture. So, I reposted the lecture on word pond and posted Mr. Welch's fine piece. I then found a link to your Watts posting today on a recent piece you did at Issa's Untidy Hut, in my email, so here I am. And, Watts has doubled here, there, and perhaps everywhere? After all, the title of his last complete work was "Cloudhidden: whereabouts Unknown". I think we've found him today passing over as you wrote in your beautiful monostitch response to Merrill Gonzales' earlier words for Watts. Didn't know I'd be in a seance today. Woke me up! Mucho robusto thanks.

You know how a sculptor will say he just bashes away all the stone that isn't the figure?

Well, 'tis possible to go to the page and scratch away all the white stuff that's covering the poem.

A poem by Adam Zagajewski, one of my favs, forwarded along by an interested reader, re: photos of poets:

Reps was first one to "do" (American) English hakai / Zennish haiga ..

I got tears in my eyes
especially
the Good one
re: those circles of friends

who were also very "into"
Eastern Culture ....

Mike, thanks for the (refreshing) bit of info I (sort of) knew it

never did hear from you re: that book of mine that you "won" at that Bend event ...

&
when will TUNDRA be back ?

a writer moved to Japan and married the doughtier of a poor samurai and wrote much much much about Japanese culture and myths and stories and poetry...

and ws, most likely the "plinth" that these guys stood upon

Lafcadio Hearn who moved to Japan (Tokyo) in 1890 or before... taught English for $$$ income and, during a very cold winter spell
married a Japanese girl to stay warm ! He ws even adopted by a Japanese family

I'm sure that everyone interested in japanese literature & etcs who went to Japan knew Hearn.

bypass your Google Search and go directly to :
The Selected Writings of Lafcadio Hearn

check out LH's Kwaidan & his Japan : Stories of Japanese Life

Thanks again very much for the big picture context. I really appreciate it very much.

You would not throw out all thoughts of Zen influencing haiku, just restore a balance?

Or am I wrong in that assumption.

Yes, you started all this going (a second tip o' the hat your way). I'm reading Suzuki now (Zen and Japanese Culture) in conjunction with a reading group I'm in that is taking on Blyth's 4 volume haiku set.

A group seance - a fine analogy to life there, sort of are we a parcel of butterflies dreaming we are people ...

Happy you liked the monostitch.

There is a poem inside that poem ...

that "balance" be-ing (only) two elements as all art,
poetry, nature, etc

are made up of only two elements :

the inside and the outside.
where content / essence creates-determines .... form

if only this full moon could (unconditionally) read this poem/metaphor which 're:guards' her :

More big picture POV and also very much appreciated. Thanks for all and particularly for Cor on Hearn. Just great.

Will have to dust of my Reps - never any dust on the Hearn!

No, Don, I wouldn't throw out all thoughts of Zen influencing haiku (in fact, it's vital to its aesthetics and history), but would want more of a balance. Blyth over-Zenned haiku, and Watts and Suzuki contributed to it, as did the Beats, so I do believe thinking of haiku as a "Zen art" is a "distortion" of haiku. But many so-called Zen aspects of haiku (simplicity, suchness, etc.) are part of its appeal to me. Nevertheless, my perspective is that calling contemporary haiku a Zen poem is like saying sonnets are Christian. Of course not.

I'm now (re)reading D. T. Suzuki's writing on haiku. Paul Reps is also a favourite, and yes, one of the haiku pioneers (also in haiga), but he also wrote many short pieces that are not haiku, and never differentiated between them. Wonderful spirit, wonderful poems, but Reps leaves the reader to decide, if at all, whether a poem is a haiku or not.

Thanks, Michael - I had a feeling that was your perspective. I just put the volume with Suzuki on haiki on hold at the library.

Great to have this extended discussion from multiple points of view. Something new each day ...

where-in he adds much "stuff"
like
check out the section (Japanese) Love of Nature
here is something interesting (at least to me)... a poem/piece by Ryota (sorry 'bout the dash over the "o")

In the June rains,
One night, as if by stealth
The moon, through the pines.


(now, translation by D.T.S.' friend Basil Chamberlain (who I've come across/read before but can't recall where or when)..

Suzuki leads the reader (such as we are) into it with:

"The 'haiku' as it stands in Japanese is no doubt unintelligible to most English readers [ & remember, he is speaking of the 1938 'readers'], while its Chinese translation in four lines [by Chamberlain], with five characters to each line, gives a fuller idea:

'Tis midsummer, and my grass hut is dreary;
Every evening I fall asleep to the sound of rain.
Suddenly the full moon hangs [in the sky],
And the shadow of the pine tree on my garden."

HOLY COWS ! ain't that an 'hoot' ? might as well be reading Walt W (who for want of a proper form rambled on and on, ad nauseum)

Don ~ I like your parcel of butterflies in a seance. Happy thanks to you for tipping your hat my way. You never forget & there's nary a a dulled moment at Issa's Untidy Hut! :-))

here is something.... looks like there is a film/biography "out there" re: D.T. Suzuki :

notice Atkens hear/here saying:
"he would stand IN FRONT OF OUR CLASS and .."

that or a similar "take" re Buddhism was done via

Mystic Fire Video by Robert Thurman (the dad of Uma

-this "uma" not being the goddess Uma of my visual book UMA (with the two dots over the "U")..

off to write a letter and mail off a little drawing to my
new 'friend" .... What's Her Name !

not to kick that dead horse who peed on Basho
as he slept in that stable ..

not ne
cessary any
way

nor count any
syllables

I haven't commented in a long while, my apologies there. Wonderful post, needed to see the inspiration on writing today, thank you!