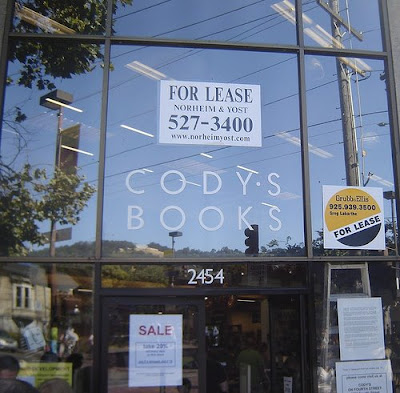 year's end--
the bell of my death place
tolls too

Some very sad news in the world of books; Cody's Books, a staple of the Berkeley, CA, scene for over 50 years closed its doors last week.

Cody's announcement from their webpage ...

Followed by some very ominous news in the world of books: amazon.uk starts to strong arm publishers for larger profit margins (the Times headline, by the way, is all wrong: Hachette is the largest publisher in the UK). Neil Gaiman, ever the voice of moderation in the real world, theorized that its time to start pointing our links elsewhere for book information and I believe he is right, at least until this thing gets straight. Actually, he was just speaking for himself (and one can only imagine the sales he generates from his online journal with all the fine recommendations he makes), but his is an excellent example to follow.

This will remind folks who have been warning about the ever beneficent google what might happen if they decided to start wielding their power in a whole scale negative way. I've always been a proponent of amazon (and not particularly prone to online paranoia) and a supporter of independent shops in my buying habits but this gives one pause, indeed.

Not only is the wolf at the door: we appear to have invited him in for dinner.

spotting wolf shit--
the grass
is so cold

That's sad about Cody's Books. There's so few independent book stores as it is.

Amazon.com is doing the same thing, it appears. The people over at WritersWeekly.com have filed an antitrust lawsuit against them for trying to strong-arm bookmakers into letting them (Amazon) publish the books themselves. All the details are here:

Pretty scary stuff, if you think about it.

I heard about this impending closure from a friend who lives out there. Even as far away as I am I felt the pain. I hate to see any bookstore close. There have been several closures here in New Orleans too.

Thanks very much for the link. I had heard something about the print on demand publishers squeeze, but this gives all the horrific details.

The reason I've been able to keep all 18 "Modest Proposal" chapbooks in print is that they are "digital" i.e. on the computer and I print them on demand. I probably would have had to fold that part of the operation a long time ago if, say, I had 100 or 200 copy print editions done by a printer. In addition, for chaps that sold over that amount, I would have had to reprint. For that matter, I now have all back issues of the full run of Lillie on disc and can print when need be.

I've been to Cody's twice when I was in San Francisco and it was always a treat. Moe's, also in Berkeley, still alive and kicking, is really great. The independents are dropping like flies. I hope some of them can hold on ...

Do you still have good new and also used shops in New Orleans? Did places make it through the flooding?