An Award for Gary Hotham, Franz Kafka, and The Other Place 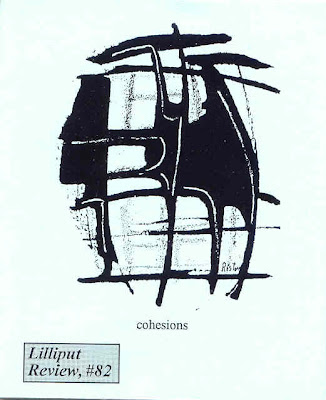 Some great news: Missed Appointment by Gary Hotham has been awarded an Honorable Mention in this year's Haiku Society of America's Mildred Kanterman Memorial Merit Book Awards. The awards were announced at the June meeting of the Haiku Society of America and the full list of award winners will appear in the autumn issue of frogpond. As a publication of Lilliput's "Modest Proposal Chapbook Series," it is a great honor for the press.

Most importantly, however, this award highlights the unflagging quality of one of the best artists writing in the haiku form today. Gary has always been extremely generous with his work with the micropress that is Lilliput Review and it means a great deal to me to see him so honored. Congrats, Gary! Stay tuned for additional news about the awards as it becomes available.

In other Lillie news, I think I neglected to mention that the always informative Poet Hound posted an insightful review of issue #161 on June 24th. The Hound regularly features markets for poetry and interesting poems from around the web and is worthwhile reading on a regular basis.

Since the bad news on the bookstore front about Cody's, here's some positive news about a poetry bookstore in Seattle.

A wonderful little poem by Naomi Shihab Nye about outdistancing loneliness was posted yesterday on the Writer's Almanac, along with the news that it's Franz Kafka's birthday. Celebrate the later (well, the former, too, come to think about it) by reading something from this parcel of translations from The Kafka Project. Today's poem on Writer's Almanac really set me back on my heels: it's a public domain work entitled "Quiet After the Rain of Morning" by Joseph Trumbull Stickney, a poet I didn't know. It reads the way you would expect a public domain poem by an "unknown" poet to read, perhaps a bit above average: lyrical, wistful in an almost nostalgic way, all the way down to the very last word. But, oh, that last word!

Lastly in the news department, if you are interested in the creative process, do not miss the Lynda Barry interview at The Comics Reporter. If you don't know her work or even if you do and don't like her, you just have to read how she describes getting to that "other place" from which the work flows. Absolutely spot-on.

This week's feature issue from the Lilliput Review archive is #82, from August 1996 (can it really be 16 years ago?!). The issue opened with a one-two punch:

reality is
the metal all
the maya is
made of

w/only the moisture of our breath
against the metal of it,
eventually the beast, he'll rust away.


Wayne Hogan reels us back in with a statement that could serve as his manifesto of the art we've come to know and love:

One of my
jobs in life as
I see it is to put more
black-and-white checks
in things, and fish, and
starry night skies with
quarter-moons, too.


It seems this was one of those issues that was just packed with moment after shining moment:

I leave grief behind
No more than crescent thumbnail
on a soft-skinned pear.


And a final one-two:

My webbed fingers
wave in recognition--
air is melted water.

Posted July 4th, started July 3rd, hence the erroneous header date, courtesy of Blogger, in case you like to keep your "yesterdays" and "todays" straight.

Till next time,
Don

Some great pieces you posted here. Eclipse and Caboodle are really nice, one beautiful, one funny.

Thanks for the kind words and glad you liked the work. This particular issue seemed jammed with good stuff.

It is very odd going back and looking at what I selected 16 years ago. The further back I go, the odder it seems, yet there is a core of work that seems to have always spoken to me.

A little like looking at old journals in a strange kind of way.

that's awesome news about "missed appointment." really a great chapbook... after i read it i immediately bought "footprints and fingerprints" from you, Don, and "breathmarks" from Barnes & Noble. Gary writes some great haiku.

Greg, thanks much, I'm real happy for Gary, who deserves recognition.

Waiting for a break, toiling in the vineyards of the small press, is to battle long odds, indeed. For those who write haiku, it is exponentially worse.

I found this Hermann Hesse poem in James Wright's collection, translated by himself. I'm sure you're aware of this one:

Across the street, leaves blow,
Across the trees, birds cry -
Across the mountains, far away,
My home must be.

Yes, that one is a beauty and strikes the quest for home (aka homesickness) theme that Wright focussed on in Hesse's work.

It is the second poem in the collection "Poems" by Hesse that Wright translated.

By the way, Franz Wright, his son and quite a formidable modern poet, also has done some great translation work.

Here's another beauty by Hesse, translated by Wright (with a subtle expression of the homesickness theme and something else too):

I, too, have been in Ravenna.
It is a little dead city
That has churches and a good many ruins.
You can read about it in books.

You walk back through it and look around you:
The streets are so muddy and damp, and so
Dumbstruck for a thousand years,
And moss and grass, everywhere.

That is what old songs are like—
You listen to them, and nobody laughs
And everybody draws back into
His own time till night falls into him.

Thanks for the plug about Poet Hound! As always, thanks for sharing the delightful poems from previous issues.

Always a pleasure, but this time the thanks go to you.