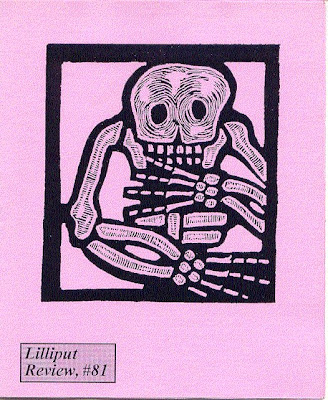 A couple of interesting tidbits, if not poetic than certainly lyrical. First a very powerful interview with Wendell Berry in The Sun should be required reading for everyone. It's long and it's worth it. Second, sad news in the cultural icon department, as reported by the Asbury Park Press: Madam Marie has passed away at the age of 93. Here's a note by Bruce from his homepage:

Back in the day when I was a fixture on the Asbury Park boardwalk, I'd often stop and talk to Madam Marie as she sat on her folding chair outside the Temple of Knowledge.

I'd sit across from her on the metal guard rail bordering the beach, and watched as she led the day trippers into the small back room where she would unlock a few of the mysteries of their future. She always told me mine looked pretty good - she was right. The world has lost enough mystery as it is - we need our fortunetellers. We send our condolences out to her family who've carried on her tradition. Over here on E Street, we will miss her. 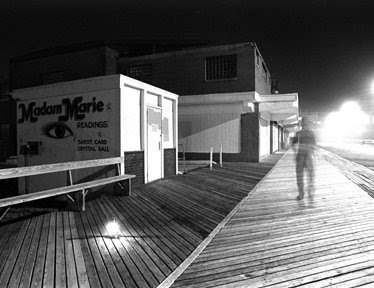 As someone who did plenty of time in Asbury Park and saw many a so-called renaissance of the town come and go, the death of Madam Marie, her passing, resonants in many ways.

Today is the birthday of someone who, after many years, has become my favorite writer: Marcel Proust. In homage to Monty Python's The All-England Summarize Proust Competition, the website TEMPSPERDU.COM has a webpage of two, three, four, five etc. word summaries of Proust (all 3,000 plus pages) submitted by visitors to their site. Cliff's Notes could learn a thing or two about summarizing from these folks. I particularly love the two word summaries and can't decide which is my favorite: "Goodnight Mama", "Mmmm ... cookies", "Society sucks", or "Time flies."

Contributor copies of the new issues of Lilliput Review, #'s 163 and 164, went out this week. I will begin working on the subscription run this weekend. Typically, with poetry to read and letters to write, it takes me 6 or so weeks to get the full run out. Such is the life of a small press editor. #163 features poems by:

If anyone has contact info on Edward O'Durr Supranowicz, I could use it to get him his contributor copies. I don't have an address for him.

This week's back issue feature from the Lillie archive is #81 from August 1996 (who remembers that a former NFL quarterback was nominated by the Republicans for vice-president?). Here are a couple of samples:


Love in the Warm Sweet Air of Springtime

oh touch me you fool


And, you know, sometimes there is the beauty of serendipity or, as Jung would have it, synchronicity. I literally came across the following two poems in this issue after I'd written the above. The first is a nod to the Madam, RIP, the second needs no explanation beyond the fact that it was a "Brobdingnag Feature Poem," an occasional feature wherein the poet is permitted to go beyond the usual 10 line limit. Enjoy.

Sidewalk slick with rain,
the fortune teller's daughter
sits barefoot in a doorway,
her painted toes curl in moist air.
The florist flirts, sells me white flowers,
casablanca lilies, he likes saying.
A street singer cries through this thick air,
he beats good rhythm on his thighs
and I give him money, of course I do.

He wrote and
rewrote the
last of Remembrance
in bed, taped
changes on
to changes, some
paper accordion
folded out
across the
room with penned
corrections.
He died days later,
the manuscripts
still near the
bed like a
ticking watch on
the wrist of
a dead soldier.


the fate of the tang dynasty

I sympathize with all the work you must have to do as a small press editor. Several times I've thought of starting a magazine, but the work load always scared me off. I'm glad there are folks such as yourself who are willing to do it, though.

Sorry to hear about Madam Marie.

Great samples across the board.

Well, when I read your postings at Razored Zen I think the same thing. How does he have the time to get it all done? And to think about doing a little mag, too - sheer folly, but folly can be a beautiful thing!

The important thing for me with the mag is, to the best of ability, to remember that there are people, poets, on the other end of the line and a kind word goes a long way. It takes time to say something folks on the subscribers' list but, whenever I don't, I question why I'm doing this in the first place. That usually gets me back on track. I've noticed that mags that send out form letters (with the exception of the big presses) usually don't last very long. Your karma running over your dogma, I say.

Thanks for the kind words. Glad you liked the poems.

Thank you for sharing the Wendell Berry interview. I particularly liked his comments concerning a "cultural landscape". That seems to me the essence of developing a sense of "place"; quite intriguing. The entire interview was excellent.

A past posting prompted me to reread two books, "The Branch Will Not Break" by James Wright and "Silence In The Snowy Fields" by Robert Bly. They were certainly interesting to read back-to-back. I have a photocopy of Bly's graduate thesis from the University of Iowa, submitted in l956. The only poem from that manuscript to have reached "Silence In The Snowy Fields" was "Where We Must Look For Help", a rather famous and good poem I think. The rest of the manuscript is quite different and un-Bly like . . . So Bly made radical changes in his thinking and poetic approach from l956 to l962, when "Silence In The Snowy Fields" was published. I would guess that James Wright had a lot to do with this development; Wright's book "The Branch Will Not Break" was published in l963, a year after Bly's. Their poetic collaboration, or companionship, resulted in two very wonderful books of poetry.

Thank you again for your intellectual promptings via "The Hut"!

Glad to hear you liked the Berry interview. It is amazing how such a back to basics guy is so very insightful about what might save us in the future, in a very practical way. He always seems spot on.

I'll have to take another trip through "Snowy Fields." I reread "Branch" sometime last year and was happy that it had lost none of its personal appeal for me and its power. I've read some of Wright's early letters and the developing relationship between them was, indeed, mutually beneficial.