A Ferlinghetti of the Mind, Mr. Brautigan's Salmon Sonnet Extravaganza and Huff & Issa: The Road Movie 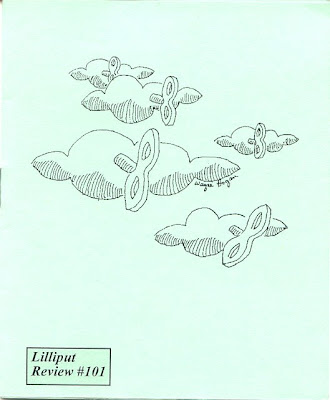 This is the 50th anniversary of the publication of one of the books on the Near Perfect Books of Poetry list: A Coney Island of the Mind by Lawrence Ferlinghetti. This is one of the very first books of poetry I remember just pulling me in and, somehow, I just knew this was for me. Here, in celebration of the man and his body of work, both as poet and publisher, is a reading in the "Lunch Poems" series at the Morrison Library of the University of California, Berkeley, from 2005:

If you can hang in until the end, there is a very powerful anti-war poem, "The History of the Airplane." At 85, he hasn't lost a step.

Least we forget, there is always the City Lights Bookstore, the premiere independent bookshop in the US. Since lots of folks are beginning to realize the repercussions of the amazon.com phenomenon and the fall out from some of its recent strong arm tactics with publishers and merchants, both here and abroad, it might be a fine thing if we all make a special effort to continue to support our local independents and national treasures like City Lights. Yeah, you lose the deep discount, but that's all you lose.

That's all you lose.

If you have a chance, check out Anne Stevenson's poem, "Living in America," which was featured this week on The Writer's Almanac. There also is a great little article on departing poet laureate, Charles Simic, one of my favorite contemporary poets.

If you can't make it up to Alaska this weekend, here's a little notice of something of interest that we might think about in passing during the day Sunday:

But why just think, let's feel too:

I think something beautiful
and amusing is gained
by remembering Sydney Greentstreet,
but it is a fragile thing.

The hand picks up a glass.
The eye looks at the glass
and then hand, glass and eye
---fall away.

Sometimes, the idea of the Net really pulls things together, other times it just seems like the big mystery that life is. For instance, what's up with blog alerts pinging items posted years ago? I certainly don't know but one thing I can say is that the random chaos of life, and so too the net, is sometimes very lyrical, indeed. I got beeped with this this past week and thought, ah, Huff's last poem. The tone, the feel, is of the old zen masters, composing their deathbed poems. Huff's manages summarizing the main concern of all his work: home, or the lack thereof:

Issa's death poem, too, sums up his own personalized approach, full of humor and sadness

Continuing the project of providing sample poems from back issues and filling in the Back Issue Archive over at the Lilliput homepage, here's some work from issue #101, originally published back in January, 1999:

knowledge
will protect us
from the darkness
but what will shield
us from the light?

The Letter M
The letter M
in green spray paint
on the gnarled bark
of a tall pine tree
its stately boughs
whispering quietly
in the afternoon breeze
is way too long for
a haiku but still
pretty fucking succinct.

another midnight
bare bulb illuminating
the back door of a slaughterhouse

Later this week, I may have news about a contemporary poetry book I actually enjoyed.


Till next time,
Don

Good poetry all, but that piece on Allen Ginsburg was just incredible. Such flow and rhythm. Definitely added to the beauty of the morning.

I treasure my very incomplete collection of City Lights anthologies. Thanks for featuring some of the City Lights voices.

Glad you liked the work ... it is amazing how smooth and easy LF makes it seem and we all know how very hard that is. Appropriate that it be for Allen, whose "Kaddish" for his mother is one of his very best works.

Jim, you are welcome.

great poems, especially the M. Kettner haiku, and I agree with Charles -- that Ferlinghetti poem is amazing. i'm gonna re-read that one a few times.

Thanks, Greg. Glad you particularly liked the Kettner and Ferlinghetti.

I've been rereading Coney Island at work for a posting I'm going to do there about the 50th anniversary and it is amazing how much of it still holds up, very powerful. It certainly deserves to be on the Near Perfect list.

Whenever I go somewhere that is writing-related, I carry my HOWL tote bag (bought at City Lights, of course) whose reverse side clearly proclaims: starving naked hysterical.

Encountered Ferlinghetti's "I am waiting" in my senior year of high school. As the years went on, I encountered the sources for his allusions, with the astonished pleasure of seeing a childhood friend on another street.
--pieplate

Glad the Ferlinghetti post sparked some memories ... I'm astounded how, in the video, he is still so vital and now at 82.