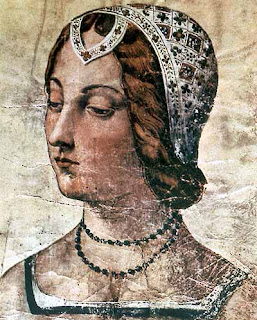 
Tomorrow is the birthday of that "Italian poet from the 13th century," Petrarch, a poet so driven by his idealized love for a woman named Laura that he revitalized the sonnet form. Of course, he was born and lived in the 14th century (1304 - 1374), but I am voting that Dylan read the dates and mistakenly came up with 13th century, a common enough error, or wrote from memory and got it wrong. Lots of Dylan folks think the poet he is referring to is Dante, but I'm sticking by my guns. In an interview in 1978 (scroll down for the interview excerpt), Dylan further muddled the matter when asked who the poet was when the discussion turned to the song, Tangled Up In Blue:


Craig : Its got those nice lines at the end, about ' there was music
in the cafes at night and revolution in the air' and ' some are
mathematicians, some are carpenters wives, I don't know how it
all got started, I don't know what they do with their lives'.

Dylan : Plutarch. Is that his name ?


Well, that's a hoot and a half, anyway you cut it. There have been so many variations of Tangled Up In Blue, along with so many variations of the particular lines in question (Dylan has evidently inserted Charles Baudelaire, the Bible, and the 15th century in various performances), the point is moot. In any case, it is Petrarch's birthday, so Petrarch it is, wrong or right.

This week's poem from the Sunday "count up" (and for those paying close attention, you'll notice the countdown and count up have just overlapped, something that roughly might happen once every two and a half years) is from Lilliput Review #22. I've chosen a different poem from the 3 recently featured in the countdown, hope you enjoy it.


Single hawk stationary above the highway
------------flapping against the wind.
One dot black on the immense snow sky

You can hear the geese but you can't see them.


departing geese
whatever are you
gabbing about?


The LitRock website with past selections is here.
Posted by Issa's Untidy Hut at 7:26 AM

then as now
everybody needs
their "Laura"

not important that Zimmerman "got it" absolutely..

I am gonna revisit Plutarch's Sonnets

and for letting i a bit of fresh aire and light!

Indeed, Ed ... and the sonnets are sensational - here's an older English version in its entirety ...

The first half of the book is a biography, so you need to slide down for the poems ... also, a great example of a crappy google scan.

Plutarch has The Lives

sometimes
I get just as mixed up
as Dylan

The Petrarchan who first "grabbed me".... Thomas "They Flee from me.." Wyatt!

and OH them conceits!

via The Norton Anthology of English Literature Volume 1

never did take the second course that used Volume 2..

spent many a day maybe 4 in the Libray of Congress reading and noting a stack of books about of Ths Wyatt, the Elder

write the/a books card catalogue number down andf an hour later they would bring out a stack of rare books..

the old book sure smelled neat..

so you could REALLY

get your nose in

time really for me to "track back" to Petrarch

Sir Walter ain't no slouch, either

Yes, the Plutarch for Petrarch is what prompted that hoot and a half ...

And thanks for the Thomas Wyatt reminder, Ed ...

Thanks for this, especially the cool connection to Dylan.

In case you're interested, here's a nice evocation by Franz Liszt -- his Petrarch Sonnet No. 123:

Hey, Tim, thanks for the kind words and link - enjoyed the performance very much - I didn't know about the Liszt pieces, so I've put a recording on reserve at the library to hear a larger sampling.